Queer girls are awesome! If you’ve read any of my posts here, you’ll know that’s kind of my “brand.” I write as many things as I can extolling the awesomeness of girls who love other girls because, first of all, it can’t be said enough, and second, that wasn’t exactly the message of the media when I was a baby lesbian twenty years ago.

I’m happy to say that there are quite a few options for the discerning queer comic-reading woman. You’ll find no DC or Marvel titles here (not that there aren’t offerings from both of them). Instead, you’ll find a sampling of smaller presses with characters you might be meeting for the first time. So sit back, enjoy, and let me introduce you to your next comic book crush, mentor, or queer bff. Here’s five of the best comics about queer women. 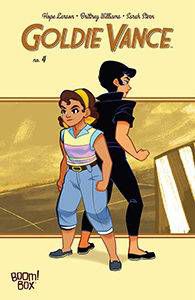 Like her predecessors, Nancy Drew and Veronica Mars, sixteen year old Marigold Vance is stubborn, adventurous, and smarter than almost everyone in the room. She’s also head over heels for her friend Diane who runs the local record store. Goldie is equal parts ferocious and sweet, the kind of girl you trust to be there in a pinch. I love that this series is an all-ages comic. Publisher BOOM! Box is particularly good at producing queer stories for a younger audience (Lumberjanes and The Backstagers come to mind), and Goldie Vance is no exception. Additionally, Brittney Williams’s art is dreamy. 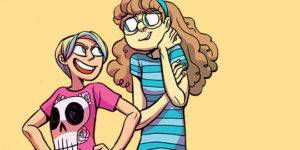 Daisy, Esther, and Susan are all first year college students, floor-mates, and best friends. Of the three, Daisy is the innocent. The one who saves orphaned pigeons and watches napkin folding videos and looks for the the sunny side of everything. I feel like I know Daisy. If she had lived in my residence hall we totally would have been friends. And yes, anyone with a hint of gaydar would quickly identified Daisy, so it was no surprise when fairly early in the series Daisy crushes hard on another woman. Unfortunately her feelings aren’t returned and it’s a little heartbreaking. However, one of the best moments is when Esther confronts the woman for leading Daisy on and pretending to like girls. “I DO like girls! And I like Daisy! But not that way,” she responds. “I just wanted to be friends with her. That’s allowed.” No one gets to tell you who you should and shouldn’t like. 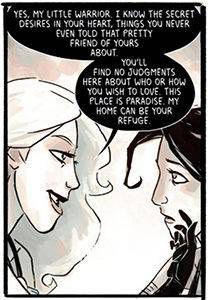 Freyja from Heathen by Natasha Alterici

Heathen chronicles the epic quest of Aydis, a young Viking woman who has been exiled from her clan for the sin of kissing another woman. (Technically, they all think she’s dead.) Aydis wants to be a warrior, and so decides to free Brynhild, the leader of the Valkyrie who defied Odin and has been trapped on top of a mountain for generations.  Along her journey Aydis meets (read, is kidnapped by) the goddess Freyja, who is currently leading the Valkyrie. There is a lot to love about Freyja. She is both seductress and trickster, with seemingly good, if mysterious, intentions. Freyja offers Aydis refuge and practically begs her to stay in her realm. She’s also practically naked. All. The. Time. (This is your official NSFW warning.) But hey, Freyja is the goddess of love, sex, beauty, and fertility, so I guess clothes can be optional. Freyja eventually helps Aydis on her quest, knowing that she risks Odin’s wrath. She also mysteriously drops the cryptic “I can see why she loves you,” on a confused Aydis. 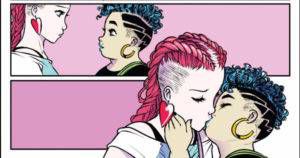 I am old enough to remember the original Jem and the Holograms cartoon. I even had a Kimber doll (think giant Barbie), because of course I did. Newsflash—Kimber turns out to be the queer one. Which is great, but it was love at first sight for me with Stormer, Kimber’s love interest. Curvy and shy, Stormer writes all the songs for The Misfits (Jem’s rival band), and isn’t convinced that a romance with Kimber is the smartest thing, no matter how much she wants it. It’s sweet first love in shades of pastel, and I adore every panel that Stormer is in. 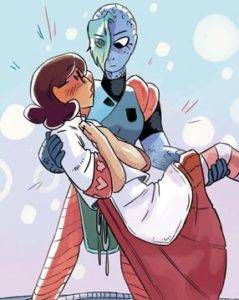 Imagine a reality television show that combines Iron Chef and Survivor with a hint of Space Balls. That’s as apt a description for Space Battle Lunchtime as I can come up with. Main character and sole human cast- member Peony quickly finds herself out of her depth yet swept off her feet (figuratively and literally) by the stoic Neptunia. Have you ever had a crush on the quiet silent girl who doesn’t seem to like anyone, but has a sweet and sensitive inner nature? Yep, that’s Neptunia. From small cooking tips to outright rescue, Neptunia is all about being there for Peony.

Honorable mention (Comics that are getting a lot right around queerness):

What are you favorite comics about queer women?