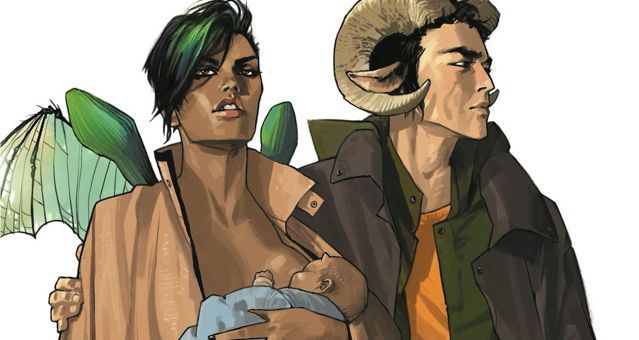 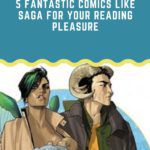 Saga was my first comic. In the years since falling in love with this extraordinary story, I’ve been on the search for comics that move me as deeply as it has. I am sorry to report that comics like Saga are hard to come by. I have yet to find one that I love as absurdly and completely as I love Saga. But I’ve found a few that come pretty damn close. 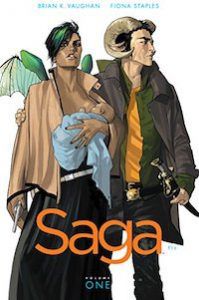 I won’t spend endless paragraphs here recounting all the things that make Saga so special. But on my ongoing search for comics like Saga, I’ve been able to pinpoint a few of the central elements that sets it apart from other comics. And while I still haven’t found a comic that does it for me the way Saga does, the comics on this list all have these elements in abundance.

These are all incredible comics in their own right. We all have our heart books, the ones that caught us at just the right moment, in just the right mood, the ones that, for some mysterious and inexplicable mix of reasons, we love harder than other books. Saga is one of those books for me. These are comics like Saga in a lot of ways, but mostly, they are their own beautiful works of art. Maybe some of them will sink into your skin the way Saga sunk into mine. 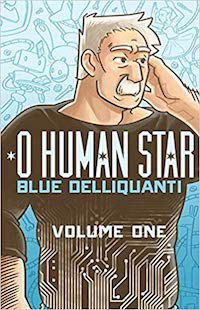 This was actually the second comic I ever read, after Saga, and did these two comics ever set the bar high. This one started as a webcomic (it’s ongoing). It’s about what happens when a famous robotics inventor wakes up in a robotic body after being dead for 16 years. I simply cannot say enough gushing things about this book. It’s about robots, but it’s really about humans—or at least what it means to be a human and who gets to decide. It’s about sentience and family and how identify shifts across time and bodies. There’s a little of everything—romance, mystery, intrigue, queer family dynamics, the politics of AI. There are layers upon layers here, and on top of that, it’s just a really good story. And a really queer one. 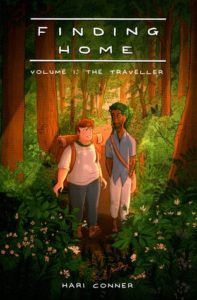 This glorious, quiet, slow-burn romance also started as a webcomic. You can buy paper copies of the first two volumes on Etsy, or read it online (it’s ongoing). It’s about two travelers who meet on the road and decide to continue on together. It takes place in a lush fantasy world that’s utterly beautiful, full of monsters, and always surprising. The art is breathtaking. The magic is compelling; the characters are more so. It’s rare that I’ve fallen so hard for two two people so fast. Conner’s story is about grief, trauma, magic, and healing. It’s serious and charming, painful and funny. There’s so much going on under the surface that makes this quiet tale much bigger than it seems. 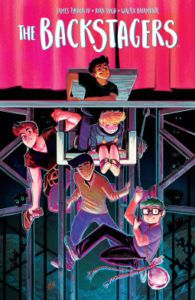 If you are in desperate need of a comic to combat the hurt and exhaustion of living in a culture steeped in toxic masculinity, look no further. The Backstagers is about a group of boys who work  in the stage crew at an all-boys high school. But the backstage of this theatre is not normal: it’s a warren of passages that lead to a magical world of wonders, terrors, and creatures of all kinds. There’s a lot of exciting adventures in this story, but it’s the characters that set it apart. It’s about a group of queer and trans boys who are who they are. They’re gentle and loving and they need each other and they get to express their feelings without fear. They talk to each other and give a lot of hugs. The art is joyful and explosive and colorful, and the warmth and care these boys feel for each other pours off the page. Backstage is a safe place for them in a world that is rarely so; I expect many readers will feel the same way about this book. 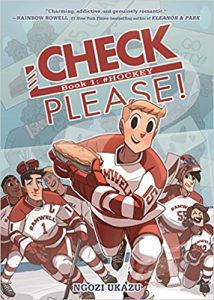 A comic about a college hockey team might seem out of place on this list of mostly magical stories, but this comic has the same integrity that I love in Saga: it does what it does extraordinarily well. The comic starts when Bitty is a freshmen and follows him through his college hockey career. I am not a sports person, but I love this comic hard. The art of the hockey games alone is worth drooling over. But what makes it so good is how unexpected it is. There’s no machismo and no toxic masculinity. It’s a story about a gay, pie-baking, hockey-playing vlogger. It’s adorable and warm and funny and makes you believe in humanity again. The tone is light, but not flippant. It’s not a one-dimensional story. Bitty is a real character, not a stereotype. Ukazu captures the real challenges of being a young person finding your way in the world with a lot of honesty and heart. 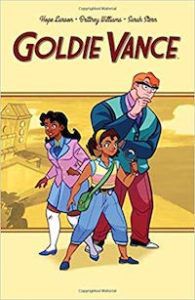 Like Check, Please!, this is a comic that does what it does extraordinary well. Goldie Vance lives with her father at the Florida resort he manages. She’s got an itch for solving mysteries, and so she teams  up with the in-house resort detective to do just that. Turns out, she is really, really good at it. With the help of her dad and a group of loyal friends, Goldie gets into all sorts of trouble, all while honing her detective skills. And crushing on another girl.

I love the world this comic builds: the 1950s Florida resort is a universe unto itself. I also love that this is a book about a black queer teenager being a badass and solving weird magical puzzles. But the biggest bit of magic is the lack of sexism, homophobia, and racism. This is clearly purposeful—it’s a world that’s not quite our world, a history that’s not quite our history. It’s certainly an escape from reality, but one that allows Goldie and her friends to have a different set of adventures and work through different challenges than the ones they’d face in the real world. This all-ages comic is playful and bright. It’s a great mystery series. But it’s also full of possibility, and that’s what makes it unputdownable.