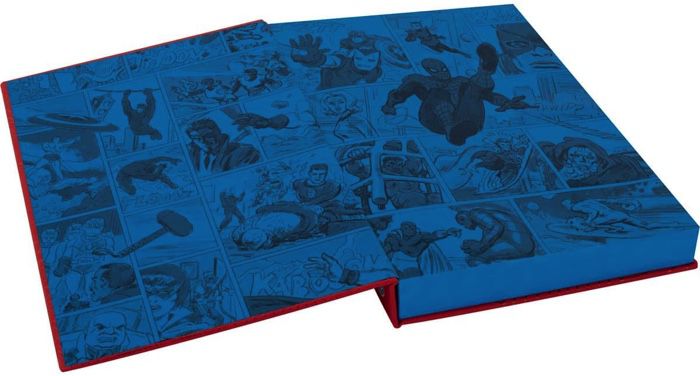 Social distancing is like physician ordered bedrest; it sounds like fun until you really want ice cream and the place up the street that makes the peach pie flavor in fresh waffle cones with fresh whipped cream is indefinitely shuttered.

At least we still have books.

Some of you are fine with reading comics on digital. Power to you. My bank account, bookshelves, and remaining floor space envy you. I tried making the transition, but my eyes are as old as the rest of me and magnifying the panels to make them easier to read makes them jump around. To be honest, I enjoy being able to take in the whole page at once and also, I like have comics in my hands.

So hard copies it is.

It’s not the best time for weekly runs to the LCS for floppies, even those with curb side service (air in the tires, gas, etc). And then there’s a whole host of other issues: do you have shelf space for them? If not, do you have enough short- or longboxes in which to file them? Enough closet space for the boxes? Enough floor space to keep a clear path around the ones that don’t fit in the closets? Sure, they’re great for building a fort, but eventually the stacks are going to get tall enough to be a safety hazard and then what are you going to do?

What is a comics geek to do?

This is where collected editions and omnibuses come in.

The cons: they tend to be hardcovers or paperbacks compiled with higher print and paper quality, and thus more expensive. And, for the most part, rather than being released at the end of an arc, collected editions are released at the end of a creative team’s run, after the last issue of a given book is released, or as a special or anniversary edition.

The pros: the aforementioned higher quality; special or variant covers; a single, if large, volume in which an entire run or book collected in one place (no lost issues or missing arcs and no having to rearrange your shelves or boxes to accommodate new issues or volumes); special features such as author interviews or concept sketches; and they’re just so. Damn. Pretty. 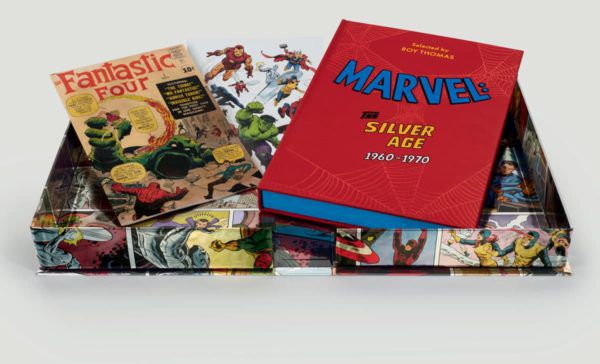 If you decide to acquire this thing of incredible beauty, make sure you lift with your knees; it’s massive. It smells like a new book the way a freaking Lexus smells like a new car the minute it rolls off the assembly line (don’t pretend you don’t smell your books, I know you), with every detail from the metallic foil cover to the ivory pages that make the reprinted, four color system comics pop in ways that shouldn’t be possible with such a limited pallet.

The book is broken down by character or team, though Thomas really leaned into the Silver Age crossovers, which I love. I mean, Namor and Daredevil? Weird Noir Black Widow and Nick Fury? Doctor Strange and some guy in a crazy hat? Odin and his really weird hat? Seriously, all the best Kirby hats are in here. If it’s possible for a person to commit their soul to a collected edition, consider me spiritually pledged to this Folio Society work of art.

Saint Young Men (AKA Jesus and Buddha take a gap year and move into a Tokyo apartment together to experience 21st century Japanese life and better understand the workings of the human mind) was originally published as a monthly serial in Morning 2 starting in 2006. The stories were collected into chapters (roughly equivalent to trade paperbacks as far as I can tell), 17 of which had been released as of July 2019. Due to concerns that a comedy manga starring major religious figures would be poorly received by American audiences, an English translation wasn’t available until late 2019 in a collected edition of the first two chapters. The second volume was released on March 17 and there are plans for four more.

The collected volumes are about the size of a hardcover novel, and thus relatively easy to transport in a larger purse or backpack. The covers are inked in lovely, expressive color, as are initial pages of each volume, after which the story transitions to more traditional black and white line drawings. Nakamura connects the reader to the story by writing us little notes between and beside panels explaining the stars preferences or letting us see snippets of their internal monologues. The end of each story has notes on concepts with which readers may not be familiar.

Maybe it’s the theologian in me—or maybe it’s the human—but Nakamura’s Jesus and Buddha are so divine and yet so human, so aware and yet so blissfully innocent, so desperate to find the best in humanity and to bring them salvation while also finding their own way in the world that I adore every moment I spend with them and their story. I often find myself laughing out loud while I’m reading, sometimes giggling quietly and sometimes outright chortling, often screenshooting and sending new favorite panels to friends. I really can’t recommend these collected volumes highly enough.

Don’t worry, this isn’t devolving into another Robin post. Beyond starring one of my very favorite Bat Boys, Grayson is one of the best books DC has put out in the last decade (at least) in that it didn’t fall back on the Batverse to give Dick form or purpose (beyond the kickstart of Dick taking the Spiral mission because Bruce asked him to). And sure, he kicks ass as always, but we also have the opportunity to see the first Robin use that other skills set Batman taught him. You know, the detective thing? Bruce is World’s Best?

And look we’re not going to ignore the fact Dick’s butt cheeks get named by the members of his gymnastics class. That would be very rude of us. Plus, Midnighter plays a really fun role in this book and he is a very under utilized character and he needs to show up in more places to be snarky and pretend he hates everyone except Apollo.

The other aspect of Grayson I really enjoyed is that instead of showing us what happened to Gotham and Blüdhaven (seriously, how does anyone even decide to move to a city called Blüdhaven, I mean honestly, it has an umlaut) in Dick’s absence, we see how his absence (AKA fake death) affects the people who care about him. I mean, Jason gets so worked up he almost says the word “brother” in Dick’s general direction and Tim stands by and watches Jason punch Dick in the face without even pretending he’s going to try to stop the Hood. Damien, who’s actually (?) dead when Dick (fake) dies (I’ve said it before and I’ll say it again, I just work here) deigns to drop his perpetual sneer to throw himself into Dick’s arms when he and the elder man are reunited toward the end of the arc. A Wayne? Showing emotion? Surely I jest!

And if you get the omnibus, you don’t have to wait to see what happens while other people keep the next trade out of the library for the full three-week lending period while you suffer. 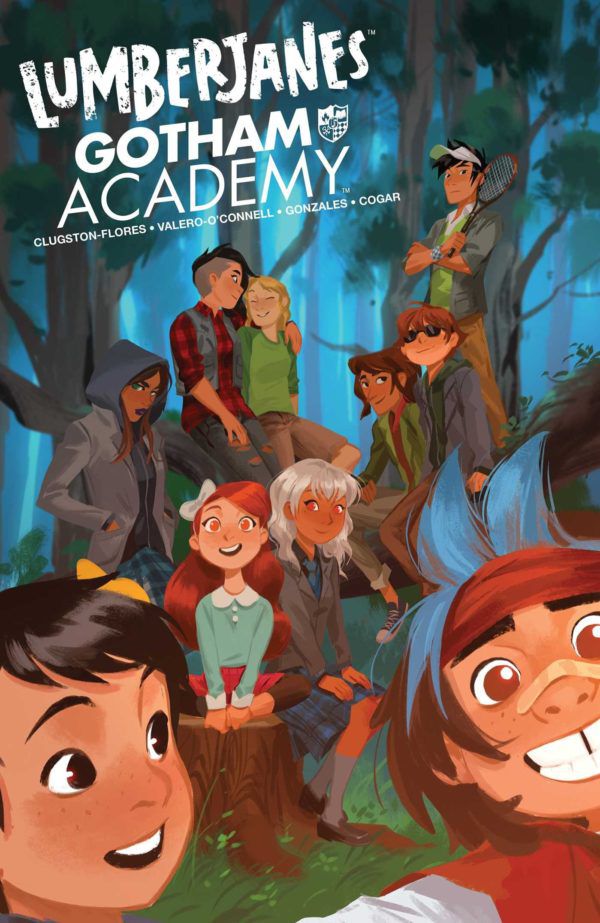 Lumberjanes follows Mal, Ripley, Molly, April, and Jo through their encounters with weird critters and supernatural happenings during a summer at scout camp.

Gotham Academy, set in the Batverse, centers on Olive Silverlock and her friends as they explore mysteries and mayhem at Gotham’s famous prep school. Which is across the street from Arkham Asylum.

In a crossover no one saw coming and everyone absolutely loved, a teacher disappears from Gotham Academy and Olive and her friends decide to solve the mystery of her disappearance and get her back. They end up in the middle of the woods with almost nothing to go on when who should appear but the Lumberjanes, also on the hunt for a missing adult. The kids team up and all signs point to an abandoned cabin in the woods.

A spooky, cursed cabin in the woods and also there are walking skeletons and giant spiders and monsters.

Crossing streams makes for great stories but confusing—and sometimes expensive—purchasing, especially if the publishers are alternating issues or one publishers is putting out the first half of the story and the other the second. In my experience, waiting for the collected edition is 100% worth it because the entire story is collated in order without any weird gaps or chrono-confusion. Also, the cover on this particular edition is adorable.

Patience yields focus, as Takashi Shirogane was so fond of saying back before we all had to pretend season 8 of Voltron never happened, and that’s particularly true when we’re talking about collected editions and comic omnibuses. Waiting a little longer to hold a whole story or collection in your hands means you get the entire story in front of your eyes all at once and your focus can be 100% on your imaginary world of choice. And goodness knows we all need to get lost a few hours a day right now.