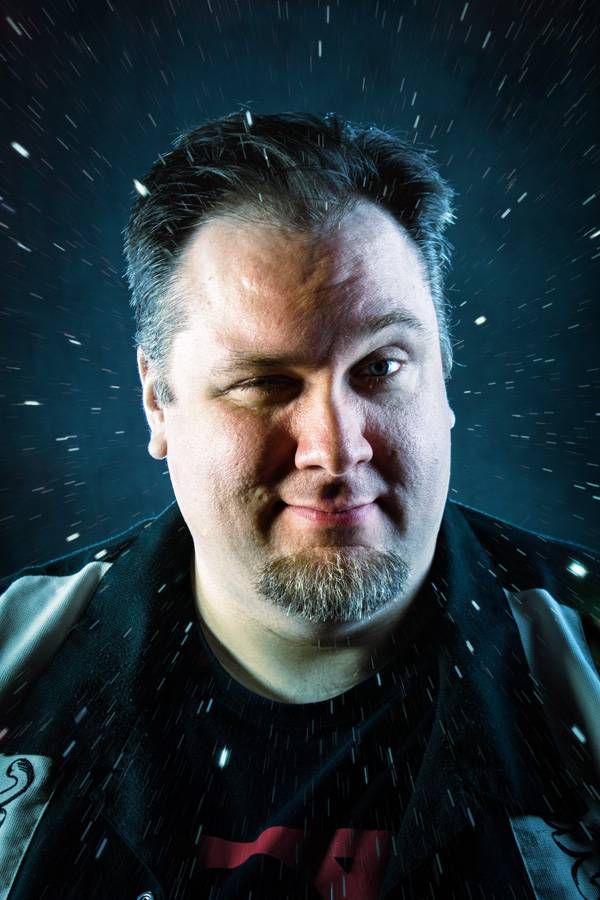 Christopher Jones has been the artist for many of the most popular comic tie-ins to DC and Marvel cartoons, including Avengers: Earth’s Mightiest Heroes, The Batman (with the comic tie-in called The Batman Strikes), and Young Justice … as well as an issue of Batman ’66 where Batman punches an imposter Abraham Lincoln. He’s also known for being a big supporter of cosplayers and general congoer well-being, keeping a cosplayer emergency kit at his convention table along with a bowl of free candy or granola bars for visitors to his area of Artists Alley.

After years of being friendly with each other on Twitter and Tumblr, I finally got to sit down with Christoper at C2E2 and chat about his work for the Big Two, his upcoming project, his advice to convention visitors, and the possibility of a new Young Justice season.

One of your best known projects is the Young Justice comic, but you’ve also done other comic tie-ins for superhero cartoons (as well as contributed to the Batman 66 series). How do you approach those projects when you’re adapting established character designs to your own comic style?

It really depends on the book. When you’re doing a comic based on an animation property like Young Justice, you’re trying to emulate a very specific drawing style, as you want the comic to look like that specific show’s version of the characters. My first time dealing with that was the stories I contributed to the comics based on the Justice League animated series, which of course are rooted in the Bruce Timm school of design. The Batman Strikes series I drew was based on the very different designs of Jeff Matsuda seen on The Batman. Avengers: Earth’s Mightiest Heroes was different as well.

The challenge is to bring enough of your own sensibilities to it that you’re giving the art some life and making it work as comic book art, rather than just mechanically reproducing the character models from the show. You even have to be able to design new characters as needed for a story and make those characters visually fit into the style of the show. Young Justice was a particular treat to work on because of the fabulous designs of Phil Bourassa and his team. That art was probably the closest to a “natural” style for me of any of the animation-based comics I’ve worked on, and there was so much thought behind the design work.

When I’ve drawn something like Batman ’66 that isn’t based on an art style but rather a live action TV show or film, that’s a different challenge altogether. Again, you’re trying to evoke a specific version of the characters rather than just being able to put my own spin on it, but you can see from the run of that series how many ways different artists found to approach it!

You’re very supportive of the Young Justice (and larger superhero) online fandom through Facebook, Tumblr, and Twitter. What’s your approach to using social media to engage with fans?

I love being able to engage with fans outside of convention appearances through social media. I just try to post something every day and be responsive to messages. Certainly I plug things I’m working on and try to share some of my own work, but I also try to offer humor and share the fun and cool things I find online. Having that engagement truly have a social flavor rather than just feeling like I’m using it purely as a promotional tool I think makes me more fun to follow, and helps underline the idea that I’m a fan, too. I try to stay upbeat and positive as much as possible in what I post. There are plenty of things I can be critical of or cranky about, but there’s plenty of that stuff online already. I’d rather attract followers that are interested in the things I’m doing and the things that I like than have followers that are looking to me to validate their own negativity about something.

You’ve been particularly active on social media lately to promote the #RenewYoungJustice campaign that’s been calling for Netflix to pick up a third season of the series. While I know you aren’t directly involved with the show itself, have you heard any good news about the possibility of a Young Justice uncancellation?

I know that it’s more than rumors, that Netflix is interested and conversations are happening that could actually lead to new episodes of Young Justice being produced.

Sadly I don’t know anything very concrete about viewership numbers, or any specifics of negotiations that might be happening between Netflix and WB Animation. But the fact that Netflix is seriously considering this and they have the two existing seasons available for streaming right now creates an amazing opportunity for Young Justice fans who are already Netflix users to actively support the show in a way that really helps and doesn’t cost them any additional money. Online petitions and things trending on twitter are perfectly nice, but don’t tend to make that big of a difference in an industry when decisions are made almost entirely based on dollars and cents.

Usually the only meaningful way to support something is with your spending dollar. And by all means, if you don’t already have the show on DVD or Blu-Ray, buying them really helps. So does buying the comics from ComiXology, or the video game or the soundtrack. It shows that there’s ongoing demand for Young Justice product and money to be made. But realistically most fans only have so much to spend.

But unlike normal TV ratings that are only measured through sampling, everything you stream on Netflix registers in a database, so they can see how popular a show is. That’s why I keep trying to help push the #KeepBingingYJ hashtag – it’s not about getting the hashtag trending, it’s a call to action to get people to watch the show on Netflix so we can get season 3 and maybe more! Which I’d certainly love to see whether or not we got the comic book back as well!

If you had to choose, what’s your favorite part of being at a con like C2E2? Do you think you prefer big cons like this or the smaller ones?

I go to a dozen conventions or so a year of all shapes and sizes, and I find that large and small conventions are great for different reasons. Small conventions definitely can offer more opportunities to relax and be social, and aren’t as overwhelming from the sheer size of the crowds. But larger conventions not only bring in more fans, but tend to have more creator guests and celebrities, and more special events as well. The conventions I attend every year tend to be divided into those I can realistically drive to and those I have to get to by plane. The biggest difference between the two types being the amount of stuff I can easily bring with me to the convention. C2E2 is the largest convention I regularly get to that’s in my driving range – I just load up my van and go!

What’s your con advice for fans wanting to get the most of their first convention experience?

Prioritize what you want to do or who you want to see before you get there. You aren’t going to be able to see and do everything. Don’t be afraid to approach creators or celebrity guests who are there. Talking to fans is why we’re there! As a guest creator, I always do my best to be polite and understanding with the people that stop by my table. Even when I occasionally have an encounter with someone who seems to be a little difficult, I always try to remember that I don’t know what kind of day they might be having or the larger context for my interaction with them. So please try to have show politeness and understanding with the guests you deal with in return. You never know what they might be dealing with that weekend. Conventions can be tiring and hard work. Do your best to stay fed, hydrated, and well-rested!

I’ve heard you have a new comic in the works. What can you tell us about it?

I’m currently working on a sci-fi graphic novel called Also Known As, which involves a war between factions of soul-collecting angels, but it’s given more of a science fiction spin than a supernatural one. The graphic novel is written by best-selling author Tony Lee, who has also written the screenplay for a film version of the same property for BoxFly Entertainment. They’re the ones funding the production of the graphic novel, which will be released by Arcana later this summer. There well be more information about the release as we get closer to San Diego Comic Con International.