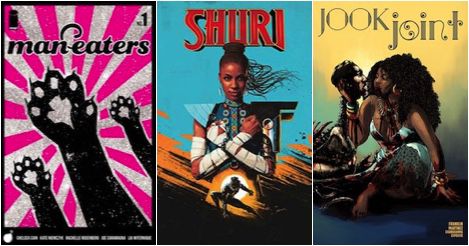 For some people, it’s Back to School. For some, it’s new comic season! And there are some reasons to be excited this fall. Comics hasn’t been as diversity-friendly as usual in 2018: women, people of color, and LGBTQ+ comic fans saw a lot of their favorites cancelled at the end of last year and the start of this year.

So I was pleased (and surprised) to see some of the #1s slated for debut this summer and fall. From Shuri to Catwoman, plenty of women are getting their own books in the back half of 2018, and women are writing and drawing them.

Is it enough? Of course not. We miss the books that were cancelled, dudes still dominate the list of books being released, and there are still very few comic creators who are women of color. That said, the books I’m seeing are exciting stories about characters I love from writers and artists whose work is amazing, and I can’t wait to read them.

Here, in order of how soon you can get your hands on them, are 10 new comics by women for your pull list this fall (and this month, because should you have to wait? No. You shouldn’t). They’re not all #1s, but they are all in their first arcs. 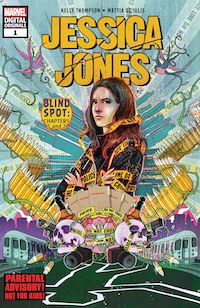 Jessica Jones has been given her own book again, and this one is being released digitally in three-month arcs before being released as trades. Thompson is also writing some other cool books, but this Jessica Jones title brings the gritty suspense of the Netflix series into the comic world where Jones is married to Luke Cage and a mom to their daughter Dani. As a self-employed mom with a small child and a partner who is the caregiver, I 100% identify with Jess’s domestic challenges (Luke is an awesome dad, but he really can’t remember which cereal to pick up at the store) while thrilling at her work problems (what is this about a dead body in her office now?)

The Stack Newsletter
Sign up to The Stack to receive Book Riot Comic's best posts, picked for you.
Thank you for signing up! Keep an eye on your inbox.
By signing up you agree to our terms of use
Jessica Jones is now available digitally. The first print trade goes on sale in November. 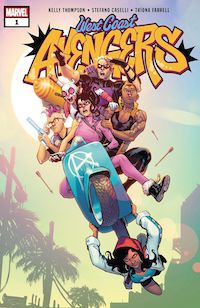 Wooo! There’s a West Coast Avengers again! And they’re a crack team made up of cool people, like America Chavez and Hawkeye, and also some of the people the East Coast Avengers would like to avoid, like Gwenpool, Kid Omega, and also, Hawkeye. And there’s a guy named Fuse. (That bit’s from the blurb.) Anyhow, if you’ve missed the Hawkeyes, America, and Gwenpool, this looks like a lot of fun. What’s that, you say? Is Kelly Thompson on this list twice?  Why, yes, she is, because she’s got to be the hardest-working woman in comics. I haven’t even listed everything she’s working on this fall.
West Coast Avengers #1 comes out August 22. 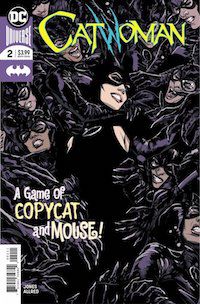 So, Catwoman has been going through some…stuff lately. You know, the whole wedding to Batman thing a couple months back, all the drama around that, some life choices that fans have been questioning, and someone impersonating her to kill people. It’s a lot to process, but luckily Catwoman has been around for 78 years and can draw on all that life experience. That’s what Joëlle Jones, who is writing and illustrating Catwoman, is doing—paying homage to different versions of Catwoman while telling a very human story about one of the best anti-heroes in the DC rogue gallery.


Catwoman is on issue 2 now. Issue 3 comes out September 5. 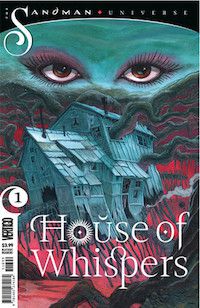 The House of Whispers written by Nalo Hopkinson, art by Domonike Stanton

Yes, Sandman is back. But also, he isn’t, because the current Lord of Dreams is missing. Instead, Vertigo is bringing back the Endless with a new series focused on Erzulie Fréda, a Voodoo goddess whose houseboat, the House of Dahomey floats on a divine bayou. This new journey into the world of Sandman kicked off this summer with a special issue co-written by  Hopkinson, Simon Spurrier, Dan Watters and Kat Howard that introduced Fréda and her House.
House of Whispers #1 will be available September 12. 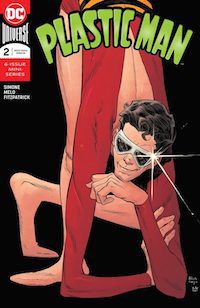 Ah, Plastic Man, aka Eel O’Brian, one of the D-list heroes in DC’s gallery. I dimly remembered him as being kind of a creeper who used his powers to peep on the women in the JLA. That was the sort of gag that might have been funny in ’80s comics but isn’t funny now, so I wasn’t going to pick up his book. But then I saw the writer was Gail Simone and I just had to see what she was doing with this jerk. Spoiler: it’s good old-fashioned goofy JLA fun. Simone has no problem exploring O’Brian’s seedy side, but she never punches down. It’s only a few issues into its arc, so definitely pick it up now and see what Plastic Man’s been up to.
Plastic Man #4 comes out September 12. 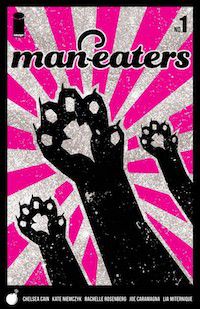 Ugh. Toxoplasmosis. It’s the worst. But in this comic, it’s even worse than that—a mutation in toxoplasma turns women with their periods into killer wildcats. They’re dangerous, and so is the panic and paranoia that accompanies the epidemic.  This comic, which features a glitter cover (I can be bought—glitter is my price)  is brought to you by the creative team behind Mockingbird.
Man-Eaters #1 will be on sale September 26. 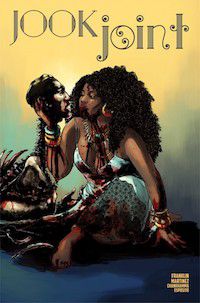 This Image comic is a five-part horror series set in 1950s New Orleans and featuring Mahalia, proprietress of the Jook Joint, the hottest nightspot in NOLA. If the men don’t keep their hands to themselves, however, things go from hot to hellish, because Mahalia heads up a coven that gives men who don’t take “no” for an answer what they deserve.  I haven’t seen any issues yet—it comes out in October, appropriately—but if the preview pages are to be believed, this is a period piece with #metoo sensibilities. And also, lots and lots of blood.
Jook Joint #1 will be available October 3. 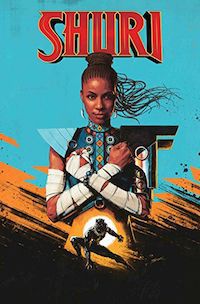 Shuri’s getting her own comic, and the great Nnedi Okorafor of Binti fame is writing it! Wakanda’s favorite princess got a movie makeover for this book—she looks more like Letitia Wright, the actress who plays her—and she’ll be an inventor (and hopefully she’ll be dropping one-liners frequently). This book will see her doing something I hope to see in the movie—step into her brother’s shoes. (T’Challa is missing in action.) This isn’t Okorafor’s first outing in Wakanda, so buckle up as the best Disney princess ponders her future as Wakanda’s potential queen.
Shuri #1 comes out October 17. 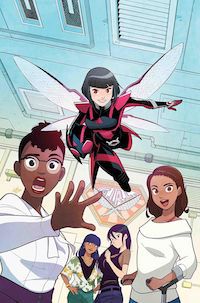 The Unstoppable Wasp written by Jeremy Whitley, art by Gurihiru

I fell in love with Japanese illustration team Gurihiru when they were illustrating Gwenpool (have I mentioned that I miss Gwenpool?) so I am delighted to see them working on another project with Marvel. This book focuses on Nadia van Dyne, the daughter of  Hank Pym. Backed by the original Wasp Janet Van Dyne (not her mom like you’d think, long story), Nadia leads a team of scientists in a fight against AIM. Gurihiru looks like a perfect artistic fit for this book and I’m excited to read it.
The Unstoppable Wasp #1 will be released October 17. 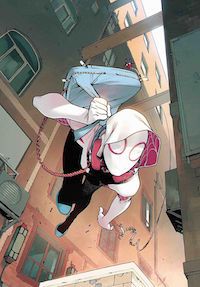 I will be honest with you: I am not a huge Spider-fan (afraid of spiders, 0/0 stars, do not recommend a hero who can spin a web of any size) and I have no idea what Spider-Geddon is. But I know what a Spider-Gwen is! I know what a Ghost Rider is! And I know who Seanan McGuire is! And I’m psyched to see all their names together on a cover. According to the blurb, Gwen is in her home reality, fighting crime, but unaware interdimensional calamity threatens. I love McGuire’s novellas, so I am here for this, spiders or not.
Spider-Gwen AKA Ghost Spider is available October 24.