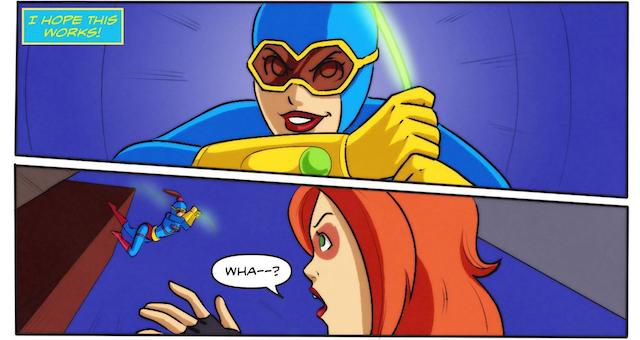 What is it about bad guys in love that captivates fans’ hearts? Is it watching two flawed people learn to care for each other? Or maybe we like seeing how complicated lives can get even more complex when feelings are involved. (It’s relatable!) Or maybe it’s just the thrill of the chase. Whatever it is, there are three comics out right now that put love stories between villains/antiheroes front and center.

These lovebirds aren’t all bad—most of them are morally grey—but they’re not above a little light criminal activity, and even better: they’re all wild about each other. Two of the books are familiar, beloved ships. One is an indie book you’ll like if you like the other two. Promise. 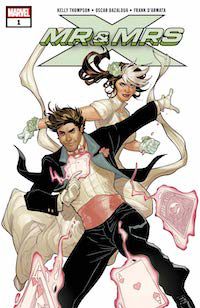 Rogue and Gambit have been a thing for decades. Their big will-they-or-won’t-they energy was always fueled by the fact that they both totally would, if it weren’t for Rogue’s inconvenient energy-sapping powers. That specific dynamic changed as Rogue’s powers changed over the years, but she and Gambit have remained in each other’s orbits, even as their relationship got more complicated. (Although they’re both technically heroes, Rogue and Gambit are both morally ambiguous—Gambit’s a thief and Rogue started her career by attacking Carol Danvers and stealing her powers.) The latest development in this long-term relationship? Marriage. After a previous miniseries dealing with their complex past, Rogue and Gambit tied the knot last year.

This book, written by Kelly Thompson and penciled by Oscar Bazaldua, follows their adventures as a married couple for 12 issues—it started in summer of 2018 and wrapped up this past summer. 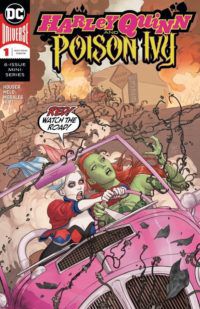 Everyone’s favorite DC supervillain/antihero ‘ship, Harley Quinn and Poison Ivy, are smack in the middle of a mini-series right now. Written by Jody Houser, penciled by Adriana Melo, inked by Mark Morales, lettered by Gabriela Downie, and colored by Hi-Fi, the book follows Harley as she does her best to help Pammie, who is recovering from the events of Heroes in Crisis.

It’s a touching story, and it’s tightly focused on Harley and Pam with nary a Batman in sight. The book highlights the pair’s feelings for each other and Poison Ivy’s difficult recovery from trauma, which can make it heavy, but it’s also fun, thanks to their attempts to be good (but not too good) and to their frequent fights with other villains. Harley’s baseball bat gets a workout during those. 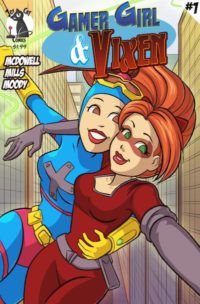 If you’re charmed by Harley and Ivy, I’ve got an indie rec for you: Gamer Girl & Vixen by Kristi McDowell and Sean Ian Mills, illustrated by Gemma Moody and lettered by Taylor Esposito. Vol. 1. of Gamer Girl & Vixen (awesome title: Flirty Money) focuses on two young women: Liz and Bianca.

They’re both mild-mannered college students, but after class? They’re supervillains, robbing the city around their college campus! The pair first meets on a rooftop during a robbery, and it’s pretty obvious they’re into each other. But things are complicated in their personal lives: Liz has a girlfriend but she’s not into her (and she’s too afraid to break up with her) and Bianca’s closeted, dating a guy to please her bigoted mother. Bianca has an additional issue: her father was a famous cat burglar and it’s landed him in jail. She can’t help but follow in his footsteps, but knows what can happen if a villain gets caught.

I bought Gamer Girl & Vixen a year ago at LadiesCon in Boston from McDowell. When I ran into McDowell at this year’s LadiesCon, she said there’s a second volume coming out next year. In the upcoming trade, she says Gamer Girl & Vixen meet the real bad guys in their universe and they’re not okay with them. To quote McDowell quoting GG and Vixen themselves,”we’re bad guys, not bitches.”