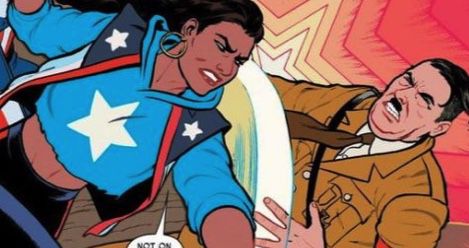 Comics have never been about the capes and tights brigade only. Nor have they always been a boys club: Cap and Wondy both punched Hitler, remember. The ’80s and ’90s, however, with a few notable exceptions, weren’t great for the ladies: some were large-breasted, thong-clad eye-candy. Some were abused or murdered to further the stories of boyfriends and husbands and fathers. Many were assaulted for the sake of furthering plot, Jessica Jones and the original Ms.—now Captain—Marvel among them. 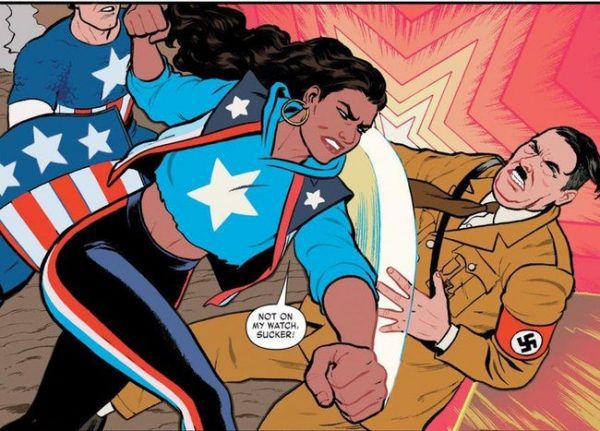 Things are changing, albeit at a glacial pace, with female creators, as well as their creations, refusing to stand aside or stay quiet any longer. All you need do is some surface research on ComicsGate or google “Chelsea Cain Vision Cancelled” to understand why we ladies (and all those who identify as non-men) still disgusted by large swaths of the industry and why we continue to clamor for “Higher, further, faster, more.”

You have something to write with? Because you’re going to want to take notes for your next visit to the LCS. 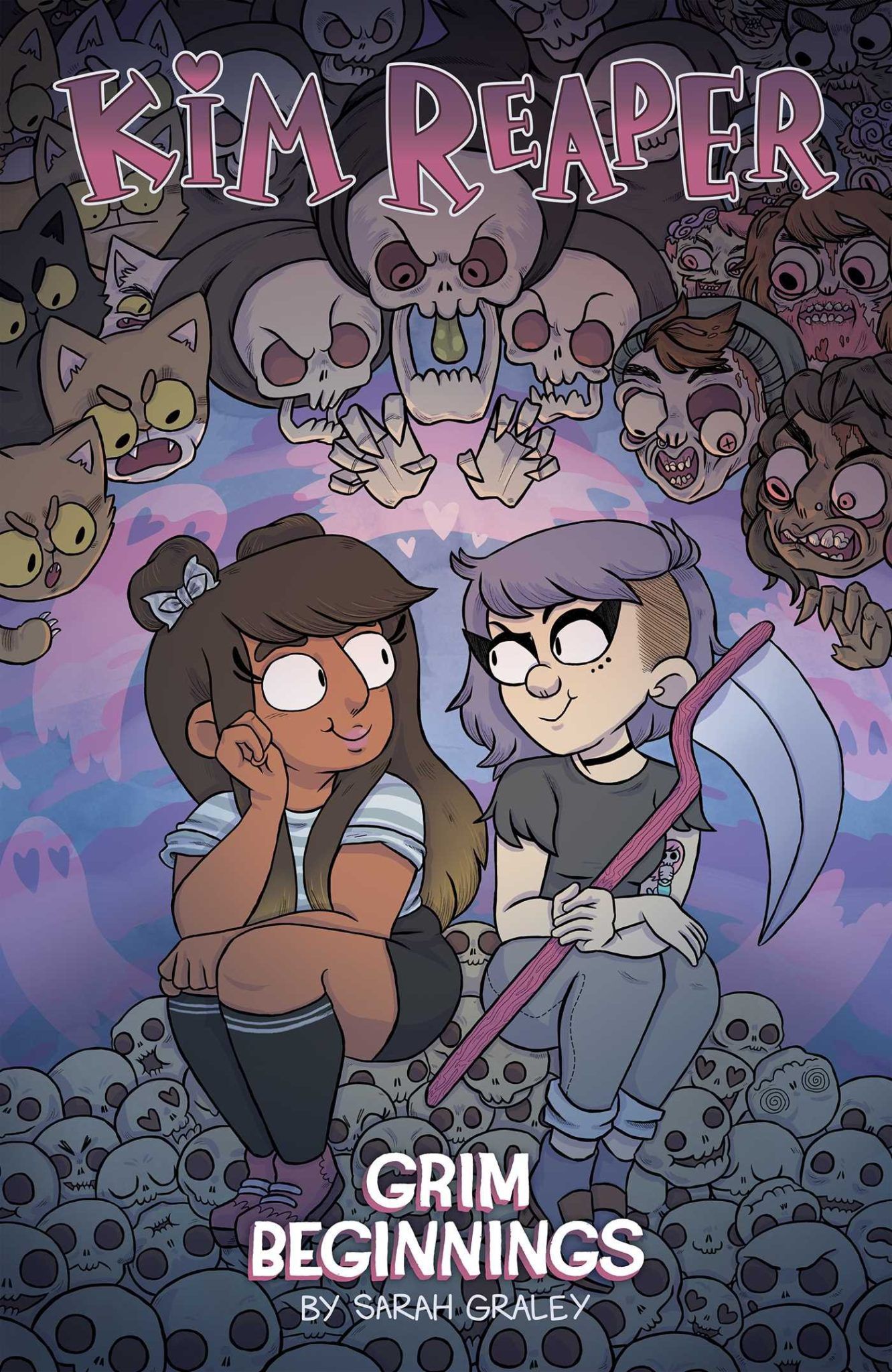 Becka is a typical university student who spends a good chunk of time crushing on her classmate, the mysterious Kim. After the girls start to date, Becka discovers Kim has an unusual part-time job: grim reaper. Unfazed by the revelation and the sudden presence of the supernatural in her life, Becka and Kim adorably and awkwardly continue, with missteps and miscommunications, to fumble their way toward love. Their burgeoning relationship is put in jeopardy, however, when Kim goes against the reaper rules to save Becka’s life and, as punishment, has to take the crappiest of the reaper shifts until her boss forgives her.

I adore these girls. They’re cute without being saccharine and their relationship, urban fantasy-ish premise aside, develops naturally and honestly. I also really like that sexuality is treated as a matter of course in Kim Reaper, factoring into the story without ruling it, a part of the whole but not the point of the book. That Becka and Kim like one another simply is, and while message books continue to be important, I think it’s equally important for gay characters to have the chance to find joy in one another and move forward with their lives, and stories, together.

Kim Reaper‘s new arc, Vampire Island, started this month and the first issue had me giggling and “aw”ing in perfect balance. Start with the Vol 1 TBP, though. It will give you all the backstory you need and it is one of the most delightful things I’ve read in the last year.

(YA and up, though I would read it to my kids) 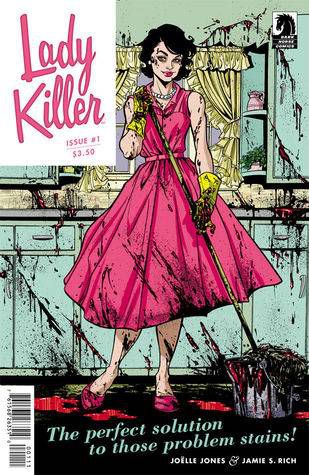 Joëlle Jones, Jamie S. Rich, and Michelle Madsen’s comic isn’t new but it is new to me, another booth-browsing find, this one at Rose City Comic Con. I was looking for new How to Train Your Dragon comics for the kiddos (Astrid could totally go on this list, FWIW) when I happened upon Vol 1 and, as you can image, promptly bought both. How I missed Lady Killer until now, I’m not sure, because it is right up my dark, twisted, female-centric alley and I regret living the last three years without Josie.

Unlike most female assassins we find in books and comics, Josie has absolutely no qualms about blood splatter except the time it takes to clean up. She likes killing and she is very, very good at it. She feels no guilt. She has no regrets, except when her side job interferes with, or threatens, her lovely, wholesome, mid-century family. And I love it. I love the honesty. I love the frank brutality, not because I enjoy seeing people hurt—I don’t—but because it’s real for this character; so often, women have to hide their strength, their rage, their truth when it deviates from social norms; it’s oddly refreshing to see Josie murder someone with the heel of her shoe and smile as she does so.

The art furthers the message with gorgeous late ’50s/early ’60s fashion, intricately patterned tea cups, and tiki-themed birthday parties, all perfect, all pristine, and all subject to vicious and gleeful destruction at any moment. That the destruction could come at the hands of the very person who built the facade, and that she will laugh as she watches it burn, adds to the urgency, the creep factor, and my unabashed enjoyment of Lady Killer. 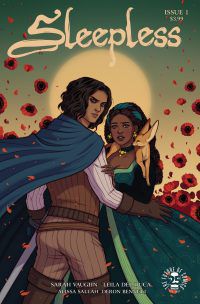 A gorgeous fairytale focused on an illegitimate princess and the knight who stands guard over her, Sarah Vaughn, Leila Del Duca, Alissa Sallah, Deron Bennett, and Gabe Fischer have created a very special book I hadn’t heard much about before finding it at, you guessed it, a con, though this time it was the artist’s table rather than the publisher’s booth.

Pyppenia is just trying to survive her uncle’s coronation. And the assassination attempts. Especially the assassination attempts. Smart, politically savvy, brave, and compassionate, the only person she can trust absolutely is Cyrenic, one of the Sleepless, an order of knights sworn to remain awake in perpetuity in order to protect their charges. Cyrenic took his oath willingly, knowing the consequences, knowing he will eventually go mad.

In the end, though, it is kind, generous, wise Pyppenia who is the savior, willing to trade her own safety for that of others, who challenges and questions and fights. Who refuses to be cowed and who will continue to fight for her kingdom, her people, and what’s right.

Hoping volume 2 is already in the works. Waiting is as hard as staying awake. 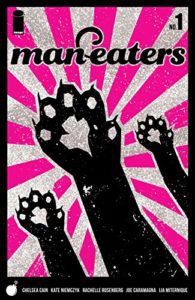 Maude is a normal adolescent girl: she spends her days bargaining with her dad for internet privileges and ice cream. She’s relatively unconcerned about the mysterious big cat attacks that plagued the country regularly for a time.

Those attacks were curbed, to some extent, after the cause was identified: toxoplasmosis X, an infection spread via cat feces that caused adolescent females to transform in to large, furious cats with the onset of menstruation.

It was, of course (sarcastic font) for the public good that the government took control of girl’s bodies by adding progesterone to the water supply in a bid to prevent them from getting their periods.

It doesn’t work for Maude.

But as the daughter of a single parent, a single dad who happens to be a cop, Maude is used to being self-reliant. She isn’t going to go quietly.

Kids, especially young women, are so often discounted and it’s gratifying to see Chelsea Cain, Kate Niemczyk, Rachelle Rosenberg, Joe Caramagna, and Lia Muternique’s story not only acknowledge their power but to bring it front and center, to focus a story on it and on a girl. Also, people are going to have to say the words “period” and “menstruation” if they want to discuss Man-Eaters, two words which still carry outdated, outmoded, ridiculous stigma. There’s a power in words and making them unavoidable and I can’t wait to see the looks on some of the dude-bros’ faces.

Buy these books. Read them in public. Answer questions about them. Drag the slackers into the modern age of comics. They may as well come along; these ladies aren’t going anywhere.