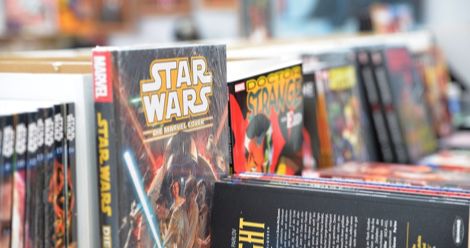 “You can’t have those,” the man said to his son, nodding his head towards the stack of comic books the boy had grabbed from the library’s shelves.

“Because comic books aren’t real books, you need to get proper books. Those don’t count.”

I was standing in my local public library, grabbing a copy of the amazing graphic novel Southern Bastards when I overheard this conversation by the self-checkout machines.

As a school librarian and a former teen librarian in the public sector, hearing this was like having a dagger which is also on fire pushed slowly through my chest.

I consistently hear from parents and teachers alike that graphic novels or comics aren’t “real books” or don’t count towards whatever reading goal they’ve created in their minds for their children or students to achieve.

As a reader, though, this also stung. There was a time when I would read nothing but Punisher comic books. Specifically Punisher: War Zone, which was for some reason even more violent and dark than the original series. 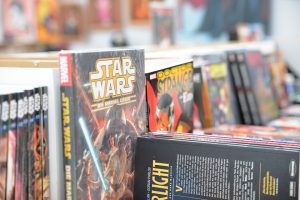 Don’t get me wrong, the guy had brought his son to the local public library to get books. There are far worse places he could’ve brought him.

He’s definitely scoring high on the “not a deadbeat” meter, but with those few sentences about comic books he also is working to dissuade his son from being excited about reading and viewing it as a fun activity. Something that reduces stress and lets him forget about whatever might be bothering him that day.

There is a mountain of evidence to suggest that reading comics is good for both your brain and your soul.

Dr. Laura Jiménez of Boston University found that graphic novels are important “because of the possibility that a different medium might provide an entry point for struggling readers, challenge gifted readers, and help more students learn.”

Another study conducted at California State University, Northridge, found that for students to improve their vocabulary they must be exposed to as many complex or difficult words as possible. Their research found that the “language used by comics is far more advanced than that the oral communication of college graduates, and uses almost twice as many rare or difficult words!”

Dan Hurley, a science writer and Washington Post journalist told the Guardian in 2014 that as a child he was labelled as “slow” and grouped with what the rest of the school called “the dumb kids.” At the age of 10 he said he was “rescued by Spiderman.” He became obsessed with reading comic books and drawing his own with his friend. By the age of 11 he was getting straight As. Hurley then spent three years interviewing psychologist and neuroscientists from around the world. His conclusion is that reading and intelligence, especially emotional intelligence, form a symbiotic relationship.

Book Riot also has its own Comic Book space if you need news, updates or reading lists, by the way.

On a base level, I know the students who devour the comics in the library I manage; they are the ones who not only attend our Manga/comic book club, but they are student library assistants, emotionally mature and responsible. That’s not to say there aren’t students in the school who don’t read comics and aren’t mature or nice or intelligent, but in the five years I’ve been running this club, it has always attracted these kinds of students without fail.

I got some backlash on Twitter when I relayed what I overheard in the library between the man and his son. I was told that I was attacking some poor dude who was just trying to do the right thing by bringing his son to the library.

A couple of points. First, I never named the guy or the library or took a photo, so there’s no public shaming to be had. Second, as a librarian I’m especially sensitive towards comments like “Don’t reread a book” and “comics aren’t real reading,” because they have a genuine impact on how teens view reading and the library in general.

These statements are killers. When a kid hears that from someone they trust and admire, it makes a bigger impact on their attitude towards reading than people realise. I see it every single day in the library, and for attitudes to change we need to start yelling it from the rooftops that reading for pleasure has proven to be beneficial to your mental health and educational outcomes, just to name a few.

So, if for someone who struggles with reading, or who wants to challenge themselves, or who just wants to relax and forget about the dumpster fire that is the current social and political landscape, reading for pleasure means reading comics, let them read comics.