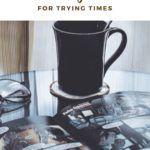 Some of us respond to the tough times by doing. Others respond by settling in. There’s no right or wrong answer, friends; it’s simply a matter of what works for you when everything goes funky. The same can be said of the comics we find comforting when the world seems to stop and then restart in reverse. Some readers prefer to see characters throw themselves in to problem solving; it’s what we’d be doing if we could and watching others do so eases our feelings of helplessness by proxy. Others turn inward seeking warmth and coziness, fluffy cushions and thick blankets. And, of course, those aren’t the only options. However you cope, there’s a comic to take your mind off the drama…unless, of course, drama is your jam…

Pieces of a dead god scattered around the world with the potential to be used as horrific super weapons? No problem. There’s a former Batman sidekick for that. Despite never having been trained as a spy, there’s no reason to think Dick Grayson can’t immediately master the necessary skills, as well as those needed to become a teacher. And of course, at the end, Dick’s nearest and dearest forgive him for faking his death and thoroughly traumatizing them because, well, he’s Dick Grayson.

Both Jen Bartel and Sina Grace cite Bloom as one of their go-to comfort comics in a recent piece for The Nerdist. Ari, who dreams of escaping the confines of his family’s bakery to live the rock star life, doesn’t expect to fall in love with his replacement, Hector. Even as Ari begins to move closer to Hector, he moves away from his old life and, in the process, learns the decisions he makes can have consequences not only for him but for the people he cares about. Even mistakes, though, can help people grow. 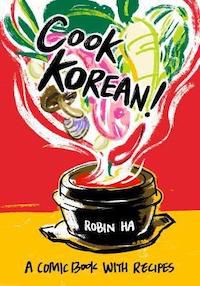 Some folx, when their world is out of sorts, soothe their anxiety by learning a new skill. I’d say I’m a 50/50 split of problem solver and task oriented; even in everyday life, I handle my (diagnosed and medically treated) anxiety with far more grace and aplomb when I have something into which I can channel it, preferably something with demonstrable, measurable results, be those results the collection of a dead gods body parts or the production of dinner.

Cook Korean! is a combination graphic novel and cookbook, perfect for those who enjoy their recipes with a personal touch. Ha’s deceptively simple instructions, complete with hand drawn illustrations, will help you master new dishes while family stories and cultural interludes lend context and meaning to every entry.

Puzzle Solvers: My Favorite Thing is Monsters by Emil Ferris

For some, nothing is as deliciously distracting as a good puzzle, be it a crossword, a sudoku, or murder mystery. If your brain finds relief from the everyday in the Gordian knots of that last, join 10-year-old Karen Reyes as she tries to solve the murder of her upstairs neighbor, Holocaust survivor Anka Silverberg. With clues lurking not only in 1960s Chicago, but also in the past, politics, and personal aspects of Anka’s own life, the reader has the opportunity to unravel the threads and tangles along with Karen, to sift through the reality of history and the fantasy of B-movie and pulp horror imagery, to arrive at the truth. 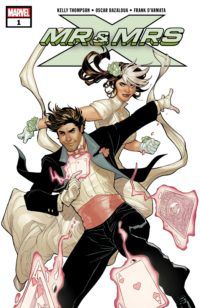 Rogue and Gambit finally tie the knot (and finally get to kiss, thanks to a power dampening necklace created by Beast) and try to survive their honeymoon. There’s a conspiracy and dimension jumping. Mayhem ensues but. Gambit does Rogue’s hair and they do eventually get to enjoy that newlywed alone time.

Kim and Kim, space bounty hunters extraordinaire, are just trying to survive their missions long enough to make rent. This team takes no prisoners and takes no shit, but they are always there for one another. Loud, bright, and absolutely delightful on all counts, the duo that kills together stays together.

The Comedians: Hawkeye: My Life as a Weapon by Matt Fraction, David Aja, and Javier Pulido and The Way of The House Husband by Kousuke Oono

Because my money job involves sometimes seeing the absolute worst of humanity, I work with people who revel in dark humor. We have to; it’s a survival mechanism. We’re also hella inappropriate, at least with one another, because we all get it and we don’t want to bring it home. If the fluffier sort of lolz are more your style, I am so, so sorry for my selections and I’ll be happy to do a post just for you after I ask around. If you enjoy the skewed sort of amusement, however, Fraction’s Hawkeye run is for you. This book is Clint the way he’s meant to be written: as the guy who reminds the mighty Avengers their purpose is to defend Earth and the normal idiots who live on it from themselves as much as from aliens and monsters. He orders pizza constantly, drinks coffee straight from the pot, brings arrows to a naked gunfight, loses his hearing aids, fights with his brother, and pisses off the Russian mafia. This arc continues to be a bright spot in an otherwise horrific decade+ of Clint Barton choices and if the Disney+ show does ever happen, FFS, this is what the people want—and I promise you, Fiege, if you replace Renner, you won’t hear a peep from anyone.

If absurd is more your speed, check out Kousuke Oono’s manga The Way of the House Husband in which a retired Yakuza assassin, the retired Yakuza assassin, in fact, has given up his reputation and untouchable status in favor of being a a supportive househusband to his hardworking wife. Tetsu spends is days crafting Instagram-worthy bento boxes, challenging the robot vacuum to cleaning contests, finding the best deals on cabbage, and trying not to get murdered every time he runs to the store. Could it ever happen? No. Will you care when you’re laughing so hard you fall off your couch? Also no.

We may all have different coping strategies, but we also all have one thing in common: we’re readers, which means when we need help we turn to books and comics. There’s a book for every mood and we’re here to help you find it. If we missed what you need,  let us know on social and we’ll get you next time!