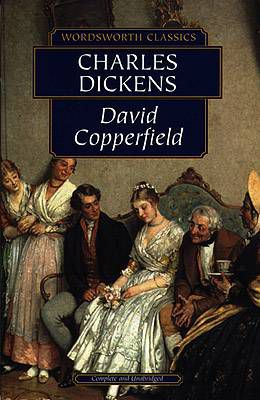 This month, the Twitter-based book club #1book140 that The Atlantic hosts is reading David Copperfield. I’ve enjoyed reading along with their selections in the past and got into the habit (I don’t remember how) of starting off with extended close-readings of the first lines of the novels.

I picked up this habit from a beloved professor who used to make us do it as an exercise. He thought that paying attention to the first line would encourage us to pay attention to the rest. He also argued that the first line can show us what to watch for if we read carefully. I don’t know if it was a time-killer or a prank or a thoroughly researched pedagogical technique, but I loved it. And still do.

So here are some observations on the first line of David Copperfield. While I have read the novel, I am proceeding here without referencing any of the plot or characters (translation: no spoilers). It’s also been awhile since I’ve read it, so I do feel like I am coming to it with relatively clear eyes.

Whether I shall turn out to be the hero of my own life, or whether that station will be held by anybody else, these pages must show.

1. The first thing I notice is what’s missing. We don’t know when, where, or who we are dealing with here. We know that the narrative will be first-person, but in terms of hard facts, that’s all we know. Actually, there are other things we know (or rather, things we know we don’t know), but let’s hold that back. So, what does a lack of information suggest? Precious little for now, but we are told what the major question of the novel is: Is this character the “hero” of their own life? Notice I use the plural here to get around the absences of gender. Though the novel is called David Copperfield, we needn’t rush to assume this is David Copperfield himself (If you did this regularly, you would have some unusual reading experiences with, say, Moby Dick or Lolita.)

2. One thing we do learn here is that the writing of the narrative is itself a subject here. The “pages” are the subject that will perform the “showing.” I would guess that the “I” of this sentence is in the process of writing their story, but exactly where we are in that story is uknown. Is the story over and this is a recounting? Or are we coming in on the middle of the story and the future of this writer has yet to be determined? The only tense clue is the “will be held by anybody else” and suggests that either a) the writer really doesn’t know who was the hero of their story and is writing as a way of finding that out or b) the position of hero is still up for grabs.

3. The “turn out to be” is a strange choice as well. The disjunction between the agency associated with a “hero” and the passivity of “turning out to be” is striking. How does one “turn out to be” a hero? Is it some sort of accident? Is it randomness, reluctance, or what exactly can lead to this? I suppose the “turn out to be” could suggest revelation rather than passivity (It turned out that the butler did it), but who exactly is it being revealed to? My sense is that the narrator doesn’t know any more than we do about who is going to be the hero.

4. I love the idea of being “the hero of your own life.” The original meaning of hero as champion or protector (rather than our contemporary meaning which is basically someone who does something good) suggests that the narrator’s life does need some sort of safeguarding. This phrase also transfers the hero’s task from protecting a community or group to protecting the individual’s existence, presumably from the group of which the individual is a member. This inversion is fascinating and I think captures something about modern society, even as this books stands at a distance from from us. For several centuries now, the literature of the West hasn’t been concerned with protecting one society from other society, but with protecting the sanctity of the individual from the society of which they are a member. The greatest threat to my own identity and well-being doesn’t come from Trojans or Visigoths, but from my government, my neighbors, my family, my employers, and my peers. My group of one still needs a champion, but that champion has to be me. Or, perhaps it doesn’t. This sentence suggests that the mantle could fall to someone else, but it’s somewhat difficult to imagine what that might look like. Wouldn’t someone else being the champion of my life make me subject to them? The firmest assumption we can make here is that the question of the narrator’s agency is a central, perhaps even the primary, theme of the novel. And, if you had to place a bet, then you would do well to be ready for this to be some sort of coming-of-age story. (I don’t know much about young adult literature as a category, but it seems to me that individual agency is a major concern of the genre. Might we consider David Copperfield a “young adult” title?)

5. I’m circling back around to “these pages must show.” At first, I took the “must show” as an indication that the writing of the narrative was the only way to determine who the hero is (or was. The time issue is troublesome). But now I wonder if there is some imperative quality to the “must.” Why must it be shown? Here I think we get some insight into the narrator: they are worried that they were/are not the hero of their own life. One only writes hundreds of pages about who the hero of their life is only if a) they don’t know and b) they want to know.

6. Ok, so now I’m off the sentence itself and into its wider implication. And by that I mean how it applies to my own life. Can you be the hero of your own life and not know it? Can you really advocate for your needs, desires, and beliefs without making the conscious decision to do so? My sense is…probably not. It takes an enormous amount of self-awareness and courage to intervene on your own behalf. (This is different than “getting what you want.” That’s a whole other mess and more about being subject to things than being a hero of your own life). 7

7. So…what have we learned? Well, I think it’s a safe bet that the novel will be about the narrator’s awakening to their own position in the world. The text itself seems to be an avenue of discovery and might even serve as mechanism for the narrator to wrest the hero mantle back from….whoever has it. Whatever happens in the plot, the most important developments will be internal, and it may well be that the reader will have to decide for themselves who the hero of the story is.