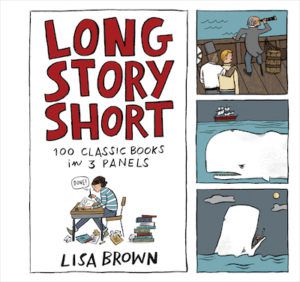 Literature is long. Comics are short. Bestselling illustrator Lisa Brown did her homework. Long Story Short offers 100 pithy and skewering three-panel literary summaries, from curriculum classics like Don Quixote, Lord of the Flies, and Jane Eyre to modern favorites like Beloved, The Brief Wondrous Life of Oscar Wao, and Twilight. Lisa Brown’s Long Story Short is the perfect way to turn a traipse through what your English teacher called “the canon” into a frolic—or to happily cram for the next occasion that requires you to appear bookish and well-read. 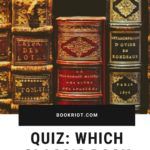 What is a classic book? For a long time, I just thought it meant “old.” Because we read a lot of classics in school, and I thought most of them were pretty bad, so I assumed they were just making us read them simply because of their age.

As I am now much older—though not classic-old—I realize that the books we consider classics are called classics because they have staying power. These are the ones society threw on the wall of the literary canon like book spaghetti, and they stuck. I even admit that I have gone back and reread some of the books I read in school and enjoyed them a lot more. As we know, so much of reading is subjective. Plus, I didn’t have to write a report about them after I was finished reading them.

I wish there was a way to know which books of our time will be considered classics in a century or two. (Although a future where we still have civilization is a silly assumption for someone to make when one of their favorite books is A Canticle for Leibowitz, but yeah, I still said it.) I think I can guess a few of them, like Beloved by Toni Morrison and The Known World by Edward P. Jones. Those are certainly books I would have wanted to read in school. Instead we spent two months talking about A Separate Peace by John Knowles until I wanted to fall out of a tree.

But back to the classics of today. This is a fun and silly quiz to tell you what classic book you are! Maybe someday I’ll do an in-depth one, like “Which Item in Miss Havisham’s House Are You?” or “Which Animal From Animal Farm Are You?” but for now, I have kept it pretty simple. Which is exactly what we need right now.