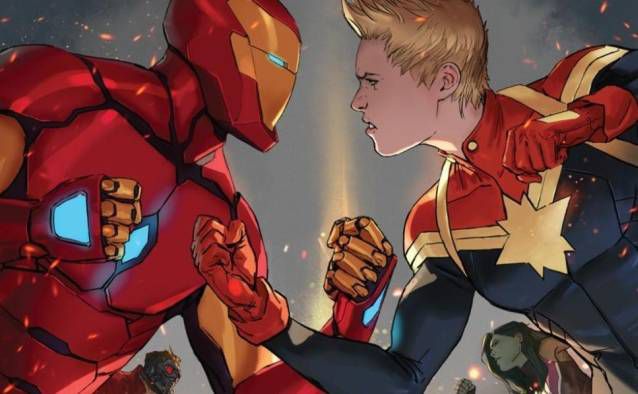 As I write this, smoke billows around my town from wildfires in the area. They’ve been raging all week, partly due to clueless tourists and largely thanks to an arsonist. No matter what the cause, thousands of acres are now burning and we all have to deal with the smoke. I don’t think I’m going to thank the universe for the perfect metaphor though, as shit is literally burning to the ground around here.

Maybe instead of using my ash-ridden town for this article, I’ll look to comics instead.

Hey, Marvel! It looks like your Civil War 2 extravaganza is depressingly apt for what’s happening in our country right now. A lot of us have been complaining about the big event for, oh, months. You know, how it seems to have gone on forever, how it’s invaded almost everything, how some of our favorite characters are basically unrecognizable, and how it seems like no one will ever come to an agreement again.

I mean, isn’t it a bummer when someone you thought you trusted and respected, who you thought stood for justice, becomes blinded by her own self-righteous intent? Or perhaps, you know, one of your favorites has joined the wrong side out of misguided loyalty to an idea; they may MEAN well, but their actions are actively hurting people, so you know, its not actually DOING any good (its doing a lot of harm, to be honest). And then there’s the people who sit back and do nothing-who don’t fight for either side, but wait for everything to shake out in the end, and by their very inaction, throw people under the bus.

I mean, I thought I knew Captain Marvel. She was one of my favorites. I loved that she went higher and believed in something. I believed in her. But this Captain Marvel? I don’t recognize her. Maybe she is speaking or acting from a place of fear or grief, but that doesn’t make it okay. Her actions are hurting innocent people. You can mean well all you want, but its your actions that matter.

Did I actually know her at all? Maybe I was just never on the other side.

Then there’s this younger generation of superheroes: the generation that says “I am so tired of fighting with you guys; I don’t agree with your methods here. We want to HELP the people who are hurting. We will be their champions.”

Maybe the younger generation will be smarter than the older one. Maybe they see how their world can be different, and Ms. Marvel and Spider-Man can push towards a brighter future where they can actually help the people who are hurting-the ones who got ignored for so long-because not everyone was actually listening to what those people have been saying for quite some time now (I’m guessing that may be because a lot of the older superheroes are white, but well, you know).

And yeah, maybe what is done cannot be undone. Maybe they’re stuck in a new reality, but man if Kamala Khan and Co aren’t going to forge a new alliance that is predicated on putting out some of the flames (See what I did there? You thought that wildfire thing was just me whining about possible smoke inhalation side effects).

From where I sit, it feels like the fires are raging and I just have this one stinking bucket and no actual superpowers. A lot of people are afraid of their homes burning, either from ignorance or hatred or inaction, and its about time for me to stop meaning well and start doing something good. Yeah, one bucket probably won’t stop anything because what we’re fighting feels pretty giant. But you know, maybe a couple working together might help.

Some pretty good places to start:

How To Respond to Everyday Bigotry

Here’s a super great list of places to donate

Give. Read. Get Involved. Listen.