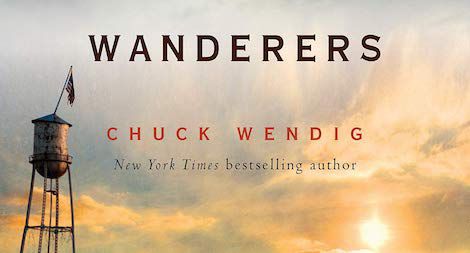 It's a book with a lot of articulated turns and twists and whoadang revelations to it, and I want those precious storybabies to be protected. So: just a head's up — good article, but if you find it, go in knowing it'll spoil a couple-few things for you.

Sleepwalkers that explode if they’re impeded. A comet discovered by a scientist who dies soon after. The threat of a global pandemic—survival rate: none. A self-aware AI that can see into the future. A religious radio show host who’s stirring up the masses, but who isn’t what he outwardly seems. A disgraced epidemiologist looking for redemption. A rich antipolitician running for president whose challenge to the establishment involves rallying the support of white supremacists and rural militias. A woman president who is reviled for her efficiancy. A rock star who just wants to rage his way into obscurity with some authenticity.

Interested in any of these factors, or any combination of them? You’ll want to put Chuck Wendig’s Wanderers on your summer reading list. 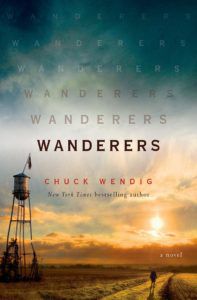 The novel clocks in at almost 800 pages, meaning that it warrants words like “tome” and “epic” that usually keep me far, far away. But it’s also plotted like a disaster movie—world-ending diseases and political implosions and all—so I picked it up at Midwinter ALA as a “maybe” (but a “probably not”). And I promptly devoured it. And I really think that you should, too.

These 800 pages pass in a whir thanks to the consistent introduction of unexpected and enthralling factors—like a fungus winding, white and pale, from a corpse found in a bayou, and a dangerous talk radio host who operates like Alex Jones, and an enraged swarm of bats who collapse a dimwitted 1 percenter during what was supposed to be his moment of triumph. Not to mention that political commentary rages through the book. I loathe Trump—in fact, I’ve been reading science fiction in great part to avoid the dank reality of his presidency; it’s pretty stinking clear that Wendig isn’t a fan, either, and the novel takes 45’s doppelganger’s villainy to its logical extremes.  For that catharsis alone—let’s call a villain a villain, already!—the book is satisfying.

But the pandemic aspects are equally gripping, and the internal relationship dynamics are excellent, soapy fun. So are the sleepwalkers: where are they going? What activated them? And, given that they’re facing trigger-happy militias on their walk around the country: will they make it to their unknown destination?

Here’s what I’m proposing: Approach Wanderers like it’s a primetime television series, along the lines of The Passage (which I’m watching, not reading, because Zack Morris) or—maybe more accurately, given its occasional shark-jumping—Lost. Break it up into 70-page segments that you can devour like candy for an hour each evening. Let it unfold across your summer. Revel in its weirdness. Start related unsolicited conversations on topics like the dangers of empowering AI or the biological consequences of climate change that will only interest those similarly steeped in the weird and apocalyptic. Don’t ask it to be artful; do anticipate its excellent, pulpy fun, and enjoy every moment, every dark development, and every loaded warning that Wendig flourishes upon you.

This novel is like Outbreak meets I, Robot meets anything Jack Ryan, in the best, oddest way. A recommendation cliche I hate, but that is apropros here: it’d make an excellent beach read! But it’s also suited to those late night hours that you usually give over to engrossing, guilty-pleasure television shows, without the nasty digital aftertaste that too much TV leaves you with. What did you do last night? You read late.  No one but you needs to know how fun it was.

Between its political and class commentary, its taking on of religious hypocrisy and faith, its treatment of mental health issues, its nanotechnology and approaches to AI, its criticism of environmental degradation, and its inclusive internal romances, there’s a lot going on in this book. And at the end of its long stretch, some questions remain—did the comet mean nothing? did 45’s evil twin survive? WTH with that last reveal?—but all leaps and readjustments end up being worth it for the continual thrills. Make Wanderers a summer reading priority; you won’t regret it.