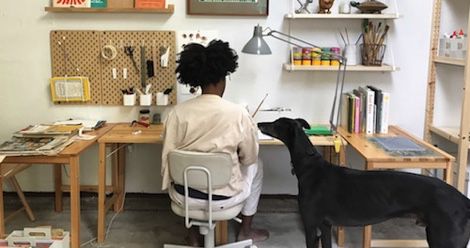 Christian Robinson is an award-winning children’s book illustrator who is a 2016 Caldecott Honoree and also received a Coretta Scott King Illustrator Honor for his art in Last Stop on Market Street. His career began in animation and his career path turned to children’s books seven years ago. He has a distinctive style that is simple and bold, using a variety of media and always in ways where you can see the real-ness to the work — you can see each brushstroke in his work, and the dimension in his collages. I love the emotion and joy that he brings to the books that he illustrates. He is one of my favourite children’s books illustrators (I’ve written about his work before here, here, and here).

More recently, he created the pictures for When’s My Birthday (words by Julie Fogliano). But the best news I have is that Robinson has a new book out! Another is his debut as an author/illustrator and a book I am so excited for. Another was published in March 2019 and like his other work, is a delight to look at and take in. This book is about imagination, adventure, seeing yourself in the books that you read, and wondering what happens if you find another you. I was lucky enough to be able to interview Robinson and ask him a few questions I was mightily curious about.

Jen Sherman: What did you want to be when you grew up?

Christian Robinson: I wanted to be a paleontologist. After watching Jurassic Park, ten-year-old me thought it would be possible to hang out with dinosaurs one day.

JS: How did you become a children’s book illustrator?

CR: Long story short, I graduated from animation school and was doing a lot of odd jobs to pay the bills. I kept a blog where I shared personal art projects. One day, I received an email from a children’s book agent asking if I had any interest in making books for kids. My answer was an enthusiastic yes, and I’ve been doing that for the last seven years. It has been the most fulfilling, life-changing adventure and I am so grateful to Steven Malk for sending that email.

JS: What was your favourite children’s book that you read in the past month?

CR: My Heart by Corinna Luyken.

JS: What about favourite adult book that you read in the past month?

CR: I am about 80% finished with Becoming by Michelle Obama.

JS: You’ve illustrated quite a few books by now. Is there any particular page or scene that you’ve done that stands out as one you really, really loved? (I’m refraining from asking which page of yours is your favourite because I imagine that’s like asking a parent who their favourite child is, but what I’m really trying to get at is this — is there anything particularly special that stands out in your memory?)

CR: It is difficult to answer this question in the way that you would probably like me to. I’m struggling to choose a favorite spread from all of my books. However, I can say that my favorite part of illustrating any book I work on is designing the jacket, bookcase, and end pages. There’s such an opportunity to set the scene and invite readers into the world of the story. It’s the most challenging but also the most rewarding part, because it is what gives readers a first impression, as we all know we totally judge books by their covers. 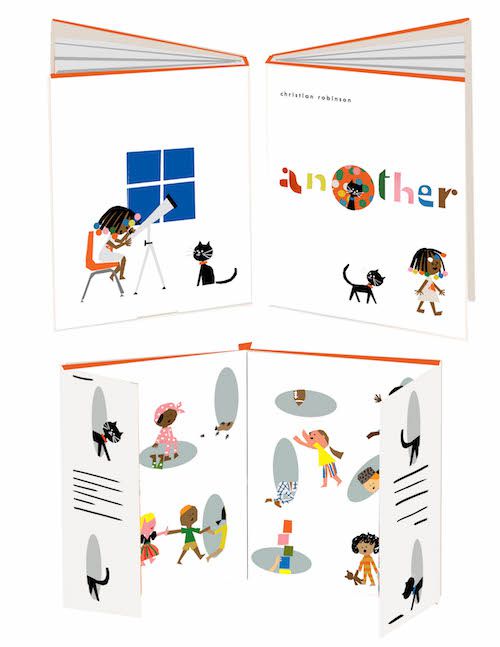 Book jacket designs for ANOTHER.

JS: What does a typical working day look like for you? Or an atypical one, if you don’t have a ‘typical’ working day.

CR: I’m usually woken up around 6:00am by my boyfriend John’s alarm. He is an elementary school teacher and is out of the house by 6:30 each morning. Since I can’t go back to sleep at this point, I usually roll out of bed around 7:00, make myself a tea composed of hot water, lemon, cayenne, and a dash of honey. Next, I do some morning stretches and take my dog Baldwin for a walk. I spend the rest of the day in my studio, which is our garage that I converted into a workspace. I can’t put a number on how many hours I spend there each day as time seems to disappear when I’m working. 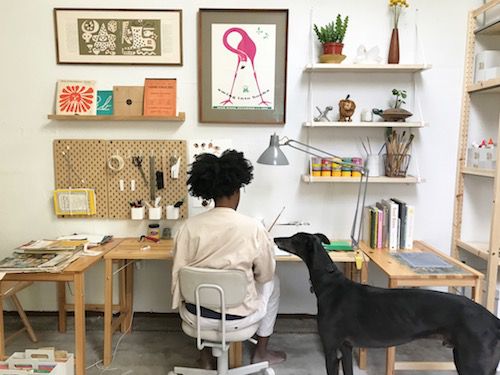 Christian Robinson in his studio. 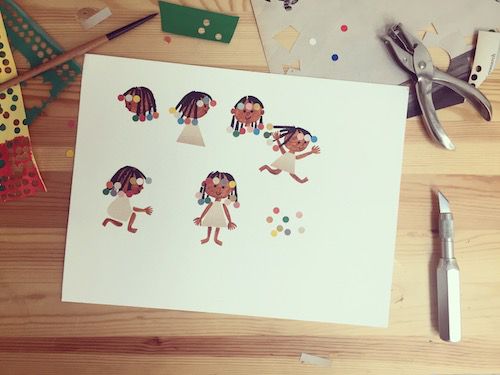 The process of creating ANOTHER — using mixed media. 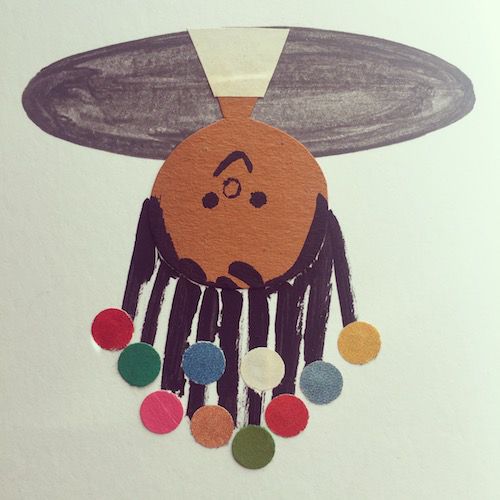 JS: What projects are you working on now or have been recently working on (I imagine you might be busy with promotional work for Another now)? I read elsewhere that you were working with a textile company; you did your own animations; you worked with magazines, newspapers, and greeting card companies. Do you have any other creative projects in the works now?

CR: After Another, I have two books that I worked on coming out in Fall 2019. The first is Just in Case You Want to Fly, written by Julie Fogliano. I also was able to contribute (along with many other illustrators) to Sunny Day: A Celebration of Sesame Street, a picture book based on the Sesame Street theme song written by Joe Raposo. I was able to design a fabric collection called SPECTACLE through Cotton + Steel. It’s available in fabric stores and online. 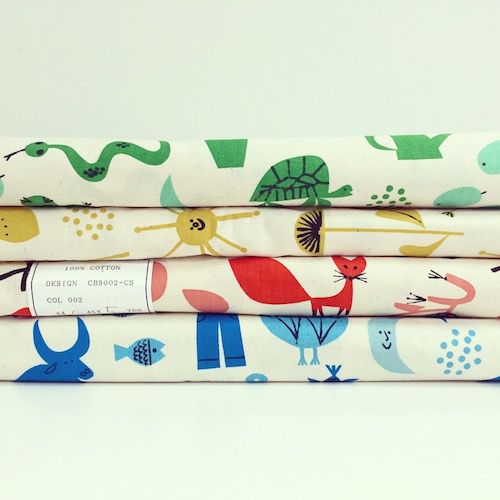 JS: What was the process like in creating Another? How was it different from other books you have worked on? I imagine it would be different to be the author and the illustrator.

CR: Typically, I’m given a manuscript and I begin to visualize and imagine what someone else’s words could look like in pictures. When creating Another, it began as pictures in my brain. Since this is my first solo book, I had to find my own voice as a storyteller.

JS: What sparked the idea for the book?

CR: Children seeing themselves reflected on the page was the spark that motivated the story. The thought that followed was well, what if a child literally saw themselves in a story? Perhaps a version of themselves from some parallel universe. As a child, I loved stories in which characters go on some magical adventure to a world where anything is possible. Often, those characters didn’t look like me or come from a community that reflected my own. I want kids today to have a different experience. 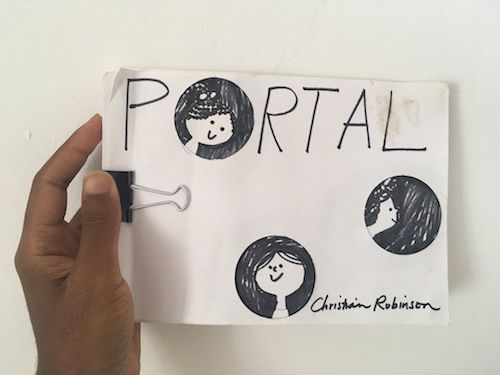 CR: As a visual storyteller, the book came to me in pictures. As I began to sketch things out, I found myself trying to find the right words to describe what was already being suggested in the pictures. As I struggled with this task and kept hitting roadblocks, I began to ask myself if words added anything to this particular story. The answer was no. Next, I created a little mockup book that I filmed myself flipping through, so that I could show publishers how I hoped a reader might engage with this book. This was important, since Another encourages the viewer to play around with the orientation of the book itself.

JS: Do you have any artist bucket-list type goals? Any authors you really want to work with, or places you want to depict? (Your work seems to be pretty influenced by cities, which makes sense given you were raised in and currently live in big cities, and I’m wondering what kind of art you would create if you spent a year on a farm or a small town somewhere!)

CR: So, lately I’ve been feeling like I already hit the lottery in being able to do what I love for a living and I’m not allowed to ask the universe for much else. My hope is that I get to continue making books, possibly even a graphic novel one day. I still have the greatest respect for animation and I would love to return to that and make short films and music videos.