Do you have a young person who read (or didn’t read) about Narnia and is looking for other Christian themed stories? If so, here is a selection of Christian fiction and nonfiction for teens and tweens to start with.

There are books for those in middle school, high school, college, and beyond. Most of the books below have an explicit Christian theme. In others, Christianity isn’t necessarily the main theme but it is clear that the characters are Christians and that their religion is important them. I haven’t read most of these titles yet. In some cases I have read books by an author listed below but not the specific book listed here. That being said, I look forward to sharing these Christian books for teens with the young people in my life and hearing what they think.

FICTION FOR THE MIDDLE SCHOOL YEARS

The New Recruit by Jill Williamson

I have two words for you, or rather for your young reader: Christian spies. Spencer is a given a choice between going to military school or joining a secret Christian intelligence organization. Although he does not consider himself to be religious (at least not as the story begins), Spencer opts for the latter, because, well, spies. This is the first book in The Mission League series so if your tween or younger teen likes this there are more.

As a dreamtreader, fourteen-year-old Archer Keaton enters dream world where he protects humanity. When the dream world starts seeping into the waking world, Archer must team up with other dreamtreaders and stop the Nightmare Lord before it’s too late. Dreamtreaders is the first in a Christian fantasy series for tweens and younger teens.

Project: Girl Power is the first book in the Girls of 622 Harbor View series and is aimed at tweens. It centers on four girls who live in a trailer park. They work to make the world a little nicer by doing things like banning together to deal with bullies and cleaning up their neighborhood.

The Sword of Six Worlds by Matt Mikalatos

Validus Smith is an ordinary girl in an ordinary town who discovers she has a destiny to save the world from a creeping darkness known as the Blight. This Christian fantasy story for tweens has been described as Christian allegory similar to C.S. Lewis’ Narnia series. 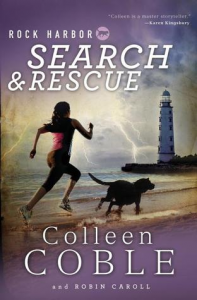 Rock Harbor Search and Rescue is the first in a middle grade mystery series based on Christian author Colleen Coble’s adult series, Rock Harbor. Kids solve mysteries alongside their search and rescue pets.

Daughters of the Faith series by Wendy Lawton

The Mean Girl Makeover series is a trilogy aimed at tweens that looks at bullying from the point of view of the victim, the bully, and the bystander through a series of stories. The books use scripture to find solutions to bullying problems.

FICTION FOR THE HIGH SCHOOL YEARS

Season of Wonder, Season of Fire, Season of Glory (The Remnants Trilogy) by Lisa Tawn Bergren

In this young adult, dystopian trilogy teenagers go on a mission to save the world from darkness.

When her Hollywood life falls apart, 15-year-old Divine is sent to live with her uncle, a pastor in Georgia, where she learns about faith and the power of forgiveness. This is the first in the young adult series, Divine and Friends.

In The God Box, high school senior Paul explores what it means to be both gay and Christian. In addition to this young adult title, Lambda Literary Award winner Alex Sanchez has written several other young adult titles including Rainbow Boys and Boyfriends with Girlfriends.

Caught in the Crossfire, Searching for Grace, Taking the Stand (Crossfire Trilogy) by Julian Rich

In this young adult romance, two boys meet at Bible camp and fall for one another.

Chop, Chop is the first in a young adult series about three friends – Laci, David, and Grey – and their faith journeys. Laci and Greg are always trying to help people in one way or another, like by growing their hair out so they can cut it off and donate it (hence, the title). Their attempts to help others usually seem to inconvenience or upset David in some way. Still over the years David finds himself having growing closer his friends and to God.

Four teenagers are chosen to go on a quest to prove their character. They must find the seven lost books of history, books with power over the past, present, and future. Chosen is the first of six books in the young adult fantasy series, The Lost Books.

Joanna Gordon is the daughter of a popular radio evangelical preacher who loves Jesus. She is also an out and proud lesbian. In her senior year of high school her father decides to move the family from Atlanta to the more conservative Rome, Georgia and he asks his daughter to hide her sexual identity during her last year of high school. She agrees but when she meets a girl that makes her heart flutter, things get complicated. This young adult title was not marketed as Christian fiction but the Joanna’s faith plays a role in the story.

Prolific authors fascinate me, which is why I had to include the Christy Miller collection. The collection is a set of four related series published between 1989 and 2017. The first series begins with a 14-year old Christy leaving her Wisconsin farm to visit her aunt and uncle in southern California. There she meets a boy who makes here think seriously about what it means to be a Christian. Over the course of twenty-two books Christy finishes high school, goes to college, gets married, and becomes a parent. Because this series takes places over several years and life changes, there are books in the series for tweens, teens, and adults.

FICTION FOR THE COLLEGE YEARS AND BEYOND

Attie Reed survived a car accident that killed her mother and best friend. She moves to Oklahoma, hoping to leave her nightmares behind and start over. Lucky for her, Riley Bennet is happy to help Attie anyway he can. This is a young adult Christian romance where faith and healing play a strong role.

Sushi for One? by Camy Tang

Lex has used her Bible study class to compile a list of traits for the perfect man but the one man she keeps running into doesn’t seem to possess a single one of those traits. It’s only when Lex starts to let God take over that she is able to truly let love into her life. Perfect for college students and other adults, Sushi for One is the first in a Christian romance series about four cousins looking for love and learning to let God’s plan for each of them unfold.

A Rebel in Jericho by Mimi Milan

Deputy Matthew Martin is escorting Catalina to her grandparents’ home in Mexico when they are ambushed. Catalina is abducted and sold. Both Matthew and Catalina find they need their faith as they struggle to survive and make their way back to one another. A Rebel in Jericho is the first in the historical romance series, The Jericho Resistance. A portion of the proceeds generated by the series will be used to help fight modern day slavery, according to the blurb in the book.

Long Way Gone is a modern retelling of the prodigal son story.

That Church Life by Teresa B. Howell

Meet Natalia, Michelle, and Missy, the three best friends who make up the “Church Gal Crew.” Follow them as they deal with spiritual downfalls, relationship crises, addictions, and career issues.

Submerged is the first in Dani Pettrey’s Alaskan Courage series, which centers on a family of adult siblings who live in Alaska and who continuingly stumble upon murder mysteries or other criminal misadventures. (One of the siblings does happen to be in law enforcement.) In this first entry of this romantic suspense series, Bailey teams up with her high school ex-boyfriend to catch a murderer. Redemption and religion play big roles throughout the series.

Leaving is the first of Karen Kingsbury’s four-book Bailey Flanigan series. In Leaving Bailey leaves Bloomington, Indiana to pursue her dreams of stardom on Broadway.

These two books teach young readers about the inspiring lives of young women and men who became saints.

Grace, God and Glory: My Leap of Faith by Gabrielle Douglas

In this personal autobiography, Gabby tells her story of faith, perseverance, and determination, demonstrating you can reach your dreams if you let yourself soar.

Blessed Are the Bored in Spirit: A Young Catholic’s Search for Meaning by Mark Hart

Aimed at Catholics looking for meaning in their faith, Blessed Are the Bored in Spirit explores why Catholics believe what they believe.

Your College Faith: Own It! by Matt Swaim and Colleen Swaim

This serves as a “field guide” to faith for students transitioning to college.

This is an inside look at the young, diverse, progressive Christians who are transforming the evangelical movement.

Rescuing the Gospel from the Cowboys: A Native American Expression of the Jesus Way by Richard Twiss

Richard Twiss gives voice to the stories of Native followers of Jesus, with perspectives on theology and spirituality plus concrete models for intercultural ministry.

In Bulletproof Faith Candace Chellew-Hodge shows readers a way through the minefield of condemnation and persecution faced by gay, lesbian, bisexual, and transgender Christians. It offers insights and spiritual practices to deflect attacks and enhance and strengthen faith.

Devotionals for Tweens and Teens

What Christian books for teens and tweens do you recommend? Check out even more books about Christianity here.