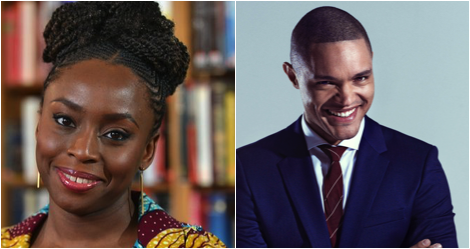 Over the course of one hour, Noah and Adichie recalled what it was like coming to America from Africa. Noah writes about growing up under South African apartheid in his 2016 memoir Born a Crime. In her 2013 novel Americanah, based on her own experiences, Adichie tells the story of a young Nigerian woman who lives in America for several years before moving back home. Americanah was selected for the first-ever One Book, One New York campaign.

“I don’t think of myself as an immigrant in the U.S., I think of myself as a Nigerian who lives in America,” Adichie said when Jackson opened with a question about the 2016 election. Both panelists wrote pieces after the election, Adichie in the New Yorker and Noah in the New York Times Magazine. Their two pieces take on different tones, representing the differing views people across the world have on the current American administration.

On May 3, Adichie recalled growing up under the military dictatorship of General Buhari. As a child, her parents had a party at their house where Adichie witnessed them talking about the government with the doors closed. “I remember thinking, why are they whispering?” she says. The event stuck in her mind as an example of what it means to grow up in a dictatorship.

“In coming here, I particularly realized that American democracy has never really been tested,” she added. “And I think because of that, there’s a kind of complacency that can result.” Adichie noted how, after the election, there was a rush by many to see the bright side and label President Trump’s “unhinged rantings” as “strategy.” That impulse, Adichie said, comes from “this incredible American discomfort with discomfort. Americans don’t like to be uncomfortable.”

“I think democracy is a very fragile thing,” she went on. “There are a number of things that people said would never happen in this country, but they are in fact happening.” For instance, her friend now carries her green card with her everywhere, which speaks to the way her friend views the new America. “There’s very little cause for optimism,” Adichie said.

Noah disagrees. In his piece, he talks about growing up under the oppression of apartheid as a person with a mixed ethnicity. Being both white and black forced him to straddle lines of division with nuance. America, however, doesn’t like nuance. “I think where I differ slightly from Chimamanda is, I agree with [American] aspiration,” Noah said. “I don’t think that negates the ability of a people to take multiple steps backward.”

“When I looked at the U.S. post the election, I struggled to hold on to the narrative that there shouldn’t be optimism,” he said. “Because I look at numbers. I still have to look at more Americans voting for Hillary. I can’t ignore the fact that three million people voted for the other person.”

Rather than seeing the new president as a reason to despair, Noah prefers to see him as a galvanizing force for a strong resistance movement. “Donald Trump is the stress test of American democracy. Sometimes you don’t know where your roof is leaking until the storm comes,” he said. Noah recounted all of the marches, protests, and activism he’s witnessed over the last several months that made him hopeful in America’s future. “I saw Americans protecting Muslims in an airport while they prayed. That’s something I thought I’d never see in my entire life, after 9/11.”

After the election, the discussion turned to the experiences both panelists had in recognizing their blackness when they came to the United States.

“I discovered I was black when I came to the U.S,” Adichie said. “I went through this process of wanting to run away from that label, of blackness. I would say, ‘I’m not black, I’m Nigerian.’ I did that for maybe a year. And I realized even that, my reaction, was an indictment of American racism. Because obviously I’m black, but because I realized that America’s understanding of black was so loaded with negativity, I thought, no, I don’t want [that].”

Reading is what made Adichie realize the “massive, unending injustice of blackness in this country.” Now, she does identify as black, which she calls a political choice. “I’m very happily black,” she says.

Similarly, Noah, who has traveled widely, was faced with the realities of his ethnicity when he came to America in ways he hadn’t been before. “When I left South Africa to come to the U.S., I had experienced blackness in all its forms. Black didn’t mean just one thing to me.” But Noah said that blackness was perceived a certain way in America, and he didn’t always fit that expectation.

Noah told a story about starting stand-up comedy in L.A., where a friend introduced him at a comedy night of black performers. The host played up Noah’s African heritage, but “When I came on stage, they all looked at me like I was going to introduce the guy from South Africa!” he laughed.

At first, Noah didn’t understand, until another friend told him, “‘Be careful that some people may perceive you as not wanting to associate with black because of how you speak, how you dress. The way you use your words, that’s not seen for some people as a ‘black’ thing.'”

“That’s when I came to realize that a lot of negative stereotypes have unfortunately absorbed some of the negative elements that have been associated with blackness because of its oppression,” Noah said. But he refuses to take on those stereotypes. “When people say, ‘Stop acting white,’ I go, ‘What are you saying?’ Why are you giving that to white people if it’s a positive thing? They don’t own it.”

You can find the full video of the event here.