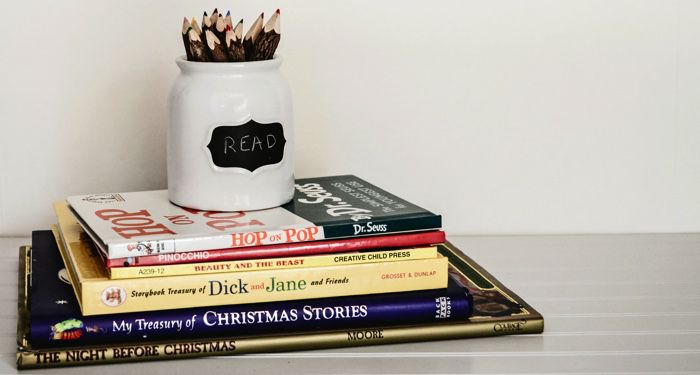 My therapist’s suggestion made evident my problem: I needed to learn about acceptance. When my therapist recommended radical acceptance to me, I gave her a look she’s probably come to expect: askance, and only slightly open because, you know, it’s therapy, and I’m supposed to be open. Her objective was that in embracing radical acceptance, I would experience less suffering over things that I can’t control. Because, as I learned from Psychology Today, “Suffering is optional; pain is not.” 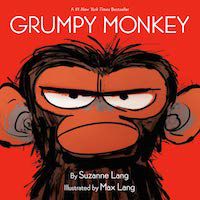 Polite girls aren’t moody or ragey or morose. They’re certainly not grumpy, and if they are, they hide it away and don’t burden other people with it. (Sounds fun, right?) But here’s the thing: anger is so, so normal. And by fighting it, hiding it, silencing it, it doesn’t go away; it gets angrier.

Enter Grumpy Monkey, a delightful picture book about Jim, a chimpanzee who wakes up to find nothing feels quite right. His friends and neighbors ask him why he’s grumpy and offer possible solutions to it, which brings him to his boiling point: he is NOT grumpy.

Except that he is. And it’s in learning to accept that feeling of grumpiness that he finds some freedom. Maybe he is grumpy. Maybe he just needs to be grumpy for a bit. Even that small admission—that acceptance—makes him feel just a bit better.

It’s the same for anger. By admitting “I’m angry,” and letting that feeling be, it doesn’t grow into a rage monster (or turn me into one); it can run its course. 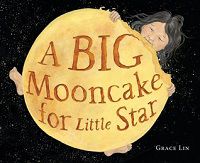 A Big Mooncake for Little Star by Grace Lin

I’m a planner. I like to plan. But once I had my son, I realized just how many of my plans would be challenged, thrown off course, or halted entirely. For small reasons: a refusal to nap, a quick grab by a tiny hand, a dirty diaper.

In A Big Mooncake for Little Star, Little Star and her mom make a big mooncake and hang it in the sky to cool. Little Star goes to bed, but she sneaks out, night after night, to sneak bites of her mooncake, bit by bit, until a whole month passes. And as she’s nibbling away, she creates the phases of the moon. When her mother follows a trail of mooncake crumbs to Little Star’s bed, she isn’t angry. In fact, she says they’ll just have to make another one.

I used to feel guilty because I don’t have that kind of flexibility or patience. I’d be so frustrated that we did all this work and Little Star ate it. But the thing is, I’m not making a magical mooncake, and I don’t live in the sky among the stars.

But while I can’t control the things that derail my plans—life or toddler—I can control how I react. Would there be any point to Little Star’s mom being super angry? No. Do they need another mooncake? Well, yes, they (we) certainly do. The fun is in making it, not in making it perfect. A Big Mooncake for Little Star taught me about letting go. (A little.) 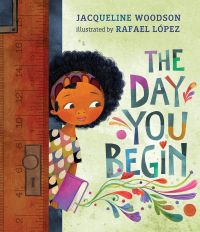 According to Psychology Today, some of the biggest hurdles to radical acceptance have to do with fear: fear of letting people off the hook, fear of seeming indulgent of ourselves, fear of being hurt.

In The Day You Begin, Jacqueline Woodson gives us a beautiful, lyrical look at the fear of beginning: of walking into a room and finding there’s no one else like you; a fear of being teased, or being misunderstood. A fear of being different.

But the twist is that in such small ways—someone having a similar, familiar experience, or language, a memory or a like or dislike—we connect. I love this bit:

“This is the day you begin // to find the places inside / your laughter and your lunches / your books, your travel and your stories, // where every new friend has something / a little like you—and something else / so fabulously not quite like you / at all.”

The fear doesn’t go away, but it’s in accepting the fear, in looking past it, that we see people and we find our place. The place that we contain, but also the places that can contain us. 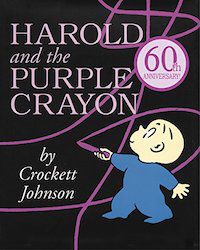 I worried my son would hate this book. He was used to bold, bright picture books. But the first time I read Harold and the Purple Crayon to him, he was mesmerized. And I was too, but for different reasons:  this kid, Harold, was the visualization of my brain.

Call it monkey mind. Call it distraction. That leaping energy, one thought to the next, one avenue of research to another. I felt so seen. My wandering thoughts, sometimes so out of control, weren’t bad; they were a resource. Harold wasn’t bad or disorganized or messy for quickly changing course and going from a picnic to a boat to a city of buildings.

And the beautiful thing, the thing that made my heart clench like a fist: at the end, those wandering thoughts? They take him home.

And that’s the key, isn’t it? To make within myself a little place I can call home. Where my behavior doesn’t need correcting, where I know I’m basically polite despite my occasional bad moods, where anger is as natural as fear, and on the other side of it, I can stop editing myself. I can rest, I can accept, and I can drop the crayon.

For more from Book Riot about self-help and emotions, check out 23 Children’s Books About Emotions for Kids With Big Feelings; 5 Self-Help Books That Actually Helped Me; Funny Self-Help Books to Rock Your World