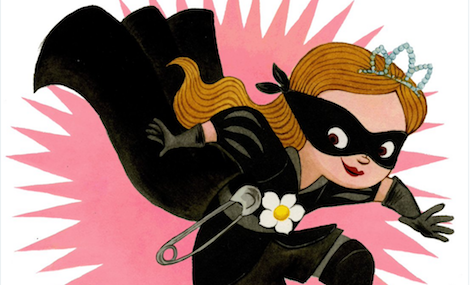 As the news sinks in that Donald Freaking Trump is going to be our next POTUS, those of us who work with kids or have our own at home have been wondering how best to explain the outcome of this election. Many kids have picked up on the stress associated with the campaign and many are all too aware of Trump’s hateful campaign rhetoric. Inspired by the larger safety pin movement, which  began with protesters against Brexit and has spread to the US with protesters against Donald Trump, children’s book author and illustrator Jarrett J. Krosoczka proposed that Kidlit authors share images of their characters wearing a safety pin. Wearing a safety pin is meant to show that the wearer is an ally against anyone who feels targeted by hate as a result of the current political climate.  Kidlit authors jumped at Krosoczka’s idea and immediately started sharing images of their characters, accompanied by words of hope. Here are some of our favorite:

BE A FRIEND to all. Reach out. Reach in. And love. #kidlitsafetypins pic.twitter.com/ZyQSMnBGYm

Cut to 24 hours later. Author Jarrett Krosoczka tweeted in response to the backlash against safety pins. He wrote:

Please read & spread the word. We should reset and pivot away from #kidlitsafetypins & consider #hugsfromkidlit pic.twitter.com/nPuuvnG7zQ

While I understand his point and the larger point of those critical of  #safetypinusa, I still feel it’s a damn shame to quash the heartfelt artwork and positive messages that were created.  Yes, wearing a safety pin is a simple gesture, probably too simple. But young children are only just beginning to learn how to respond to the world, particularly a world that is sending them horribly mixed messages about racism and bullies. The most common question I’ve heard from kids about Donald Trump is usually something along the lines of “But how did he win if he’s so mean to people?”

The #kidlitsafetypins tweets produced some beautiful, hopeful and heartfelt artwork that kids will respond to in a positive way.  Krosoczka has suggested we keep it going with the same sentiment, but a different hashtag: #hugsfromkidlit. Several illustrators have already come through:

These images are also heartening, but I can’t help but feel that something is lost without the safety pin, which was a new expression against something specific: the election of a racist bully to the highest office in this country. Safety pin or no safety pin, the impulse to let kids know that they are safe is the same. Let’s keep that going.