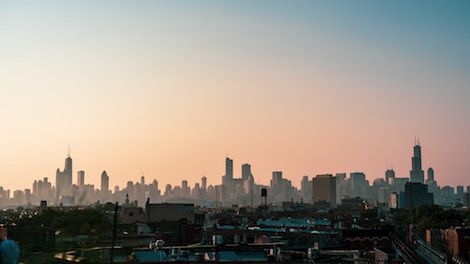 Chicago is my home and I am proud of it. Regular readers of my work know that I don’t hide it at all as evidenced by my posts about 5 Chicago Women Artists. So I’ve put together a list of places and events that are worthy of your tourism. There are many places not mentioned because they have been mentioned in prior Literary Tourist articles at Book Riot, linked at the bottom of the piece.

I’ll start with the great Chicago born or Chicago based authors. Fair warning, these are just the public locations associated with authors. They do not have houses set aside for these people…yet. These places include houses, bars, parks and much more that these authors have lived in. 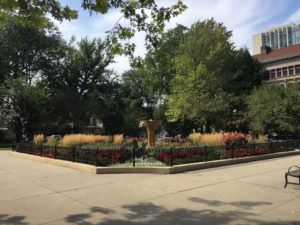 I love love love Studs Terkel. He was the quintessential Chicagoan who was an oral historian, radio host, writer, and so much more. Studs Terkel interviewed everyone on a variety of topics for his books and his show. The “Good War”: An Oral History of WWII changed my life as it made me understand that history was far more than Great White Men History and there was room for many voices. He and his wife’s ashes are said to be scattered at Washington Square Park (901 N Clark St.). The park is also known as Bughouse Square for the history of soapbox speeches. Nearby is the amazing Newberry Library.

This divey bar (1150 N Damen Ave) was a hangout of Nelson Algren back in the day. It still retains its diveyness with its red stools, dim decor, and filled with hipsters. Nelson Algren is best known for his love poem to Chicago Chicago: City on the Make. He is known for showing other side of Chicago: the people down on their luck, the addicts, the gamblers.

I’m very passionate about Jane Addams. The Hull House (800 S Halsted St.) has been converted into a little museum of her life. Jane Addams famously wrote about her resident house in 20 Years at Hull House. The museum also has interesting programming with a significant social justice bent.

Shel Silverstein was one of my childhood favorites. He’s known for books of poetry like Where the Sidewalk Ends and A Light in the Attic. And if you are a Johnny Cash fan and are familiar with the song “A Boy Named Sue”…that was penned by Shel Silverstein. The poet has ties with Logan Square and Humboldt Park during his childhood. illustrator Phil Thompson created an extensive Google map of locations.

Gwendolyn Brooks is another classic Chicago poet and author. She wrote A Street in Bronzeville, won a Pulitzer for Annie Allen, and so much more. Also I have to make a special shout out to one of her most famous poems: “We Real Cool”. Her home on 7428 S. Evans Avenue was where she lived from 1953 to 1994. For more info, check out this article about her life and coming to Chicago.

There are many wonderful libraries in Chicago that are worthy of visiting.

This is the mothership of libraries for the Chicago Public Library system. It’s a huge building with an incredible roof in downtown Chicago (400 S State St.). There are floors upon floors of books including fiction, business, music, and much more. There’s also a lot of other features to the building including music practice rooms, a makerspace with daily classes, an auditorium, rotating special exhibitions, and much more.

While Art Institute (111 S. Michigan) is world renowned, the Ryerson & Burnham Libraries doesn’t get enough credit. It’s not a circulating library but it is worth checking out. They have works on “architecture of the 18th through 20th centuries and 19th century painting, prints, drawings, and decorative arts. Special collections include the Percier and Fontaine Collection of 17th-19th century architectural books, the Mary Reynolds Collection on Dada and Surrealism, the George R. Collins Archive of Catalan Art and Architecture, and the Mrs. James Ward Thorne Collection of illustrated books” (AIC website). They also have some lovely exhibitions in the Reading Room as well. You do have to buy a ticket or be a member to use the library, however. 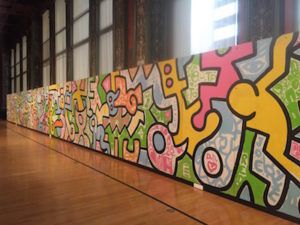 The Chicago Cultural Center (78 E Washington St.) is on the list because it was central public library starting in 1897 and became a cultural center in 1991. The building has wondrous public exhibitions that change multiple times per year that are worth checking out. Past exhibitions include a giant mural painted by Keith Haring and Chicago school children, Theo Jansen’s Strandbeests, and paintings by Archibald Motley. But the building itself is also astonishing with what is claimed to be the largest Tiffany dome, mosaic ceilings with literary quotations. They also have great events including musical performances.

I would be remiss if I didn’t include some wonderful bookshops.

Have a need for books, coffee, and booze? Then kibbitznest is the place to go! It’s not a huge bookstore but that’s okay. I love the concept of bringing the best things to life in one place. Located in Lincoln Park (2212 N Clybourn Ave).

This Logan Square based bookshop (2523 N Kedzie Blvd.) is a real delight. They have an excellent selection of books, several book clubs including one for graphic novels/comics, and even a rewards system.

This mostly used bookshop is also based in Logan Square (2620 N Milwaukee Ave). They also take works on consignment from local authors, which is also great. There’s a bookstore fluffy dog, so that’s always a plus!

I’ve written about the awesomeness of Quimby’s before but it bears repeating. Books, comics and zines? This is the place to go in Wicker Park (1854 W North Ave)! They will take works on consignment, which is amazing, and provide free event space for creators. I highly recommend checking out this amazing institution.

This wonderful bookshop in Pilsen (1102 W 18th St.) has a wonderful mission: “In addition to selling new and used books we are here to support Pilsen’s schools. The first step toward promoting literacy in our neighborhood is to provide each student with books. Every dollar that you spend directly supports this mission.” They host cool events as well.

Finally, I would be remiss if I didn’t mention some cool literary events around town. Some of these happen once a year whereas others happen on a monthly basis or so.

Chicago Alternative Comics Expo is a wondrous annual event, usually held in the beginning of June. Alternative and indie Comic book writers and artists from all over come to Boystown neighborhood to talk, trade, and sell comics. It’s a wide variety of creators from newly arrived creators to big names like Audrey Niffenegger and the Hernandez Brothers.

Held in the amazing The Plumbers Union Hall, (1340 W Washington) every May, self-publishers from Chicago and elsewhere gather to celebrate zines and much more. People come to talk about publishing, trade zines, and have a good time. There are also great workshops as well.

It’s like Fight Club…but with writing. It’s tagline is “Literature as blood sport.” This Chicago classic has been going on for several years and run by the wondrously sarcastic Ian Belknap at the Hideout (1354 W Wabansia Ave, Chicago, IL ) on the Third Tuesday of each month. There are three rounds in each competition. Each round has two writers go up against each with the weapon of a single word…Like “Giving. V. “Taking” or “Naughty” v. “Nice.” Each writer has 7 minutes to make a case for their word. The audience votes on the winner and the winner receives the Trophy of MotherFucking Glory.