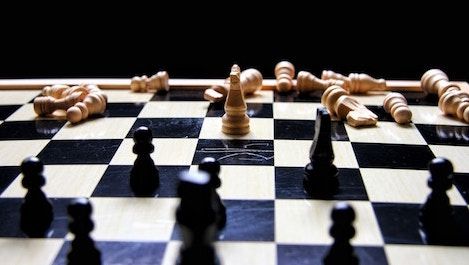 In one of the less-visited rooms of the British Museum, you come across the Lewis Chessmen. Small medieval chess pieces, they were made from walrus ivory in Norway, probably in the thirteenth century, before being transported from Scandinavia to Scotland, stashed for safekeeping, lost or forgotten, and then recovered some six centuries later by a fortunate passerby.

By the Lewis Chessmen’s time, chess had already grown into a common pastime in aristocratic circles. Having entered the continent in the early Middle Ages, probably through al-Andalus, it swept quite rapidly through the tapestry of kingdoms, republics, princedoms, and dukedoms that constituted Medieval Europe. Some of these polities took to chess more energetically than others — one town in central Germany exhibited such enthusiasm for the new game that it became known as Schachdorf, or “chess-town,” and was later awarded a state chessboard in recognition of this enthusiasm (to this day the town’s coat of arms is a chessboard).

Chess soon became the writer’s game. The literate classes from England to Italy indulged in chess literature and criticism, with many writers seeing in chess a handy metaphor. Some turned to the game for romantic purposes: one of the earliest poems to mention chess, the Catalan Scachs d’amour (“Chess of Love”), recounts, move by move, a game played between Mars and Venus, whose respective warlike and amorous qualities are examined through the chessboard. Another popular poem of the time — Les Échecs Amoureux, written by an anonymous enthusiast — explores similar themes and generated a good deal of critical discourse. Even in The Tempest we find Miranda and Ferdinand’s burgeoning romance quietly consummated in a chess match.

True to the medieval spirit, “romantic” chess — a style of chess in which players relied more on intuition and impulse than forethought and stratagem — dominated the chess scene for centuries, but it began to wane in the nineteenth and twentieth centuries along with the medieval view of chess as an innately flirty game, one that mimics the back and forths of seduction. As chess players moved away from romance and impulse to something markedly more sober, so too did their literary counterparts.

Chess in literature began to adopt new forms, with writers from Nabokov to Vonnegut to Borges to Beckett mining the game for metaphor, exploring themes ranging from sex to infinity. Of these authors, Nabokov was the one in whose work chess featured most prominently. Nabokov nurtured (or suffered from) a lifelong devotion to chess, particularly the problem solving side. In his sort-of memoir Speak, Memory he lamented “the possessive haunting of my mind” that led from this devotion and “swallowed so much time.” Chess permeates The Luzhin Defence, an earlier novel that follows the life of the fictional chess prodigy Alexsandr Luzhin who, like his creator, suffers from “a possessive haunting,” though a haunting with far stronger powers of possession, and far more tragic consequences. It also appears intermittently in later novels such as Lolita, Pnin and Pale Fire.

Other pieces of prose and poetry from Nabokov’s early years feature chess as metaphor, but when he switched to English chess began to dissolve into the novels’ scenery, lurking more in the subtext rather than standing as thematic centrepiece. In Pnin, Nabokov’s tragicomic novel about the awkward émigré Timofey Pnin, chess appears inconspicuously throughout the narrative, usually in brief flashes and often in dreamlike circumstances (as when Pnin — or Pnin’s author — recalls his hazy past). In Lolita, too, chess appears intermittently. In one of the novel’s memorable scenes, Humbert recalls the games of chess he regularly played with his neighbour Gaston Godin (whose chess proficiency didn’t quite match Humbert’s):

“Wheezing he would meditate for ten minutes — then make a losing move. Or the good man, after even more thought, might utter: au roi! with a slow old-dog woof that had a gargling sound at the back of it that made his jowls wabble; and then he would lift his circumflex eyebrows with a deep sigh as I pointed out to him that he was in check himself.”

In Speak, Memory Nabokov wrote that one of the chief attractions of chess for the artistically inclined is that it demands of its devotees “the same virtues that characterize all worthwhile art: originality, invention, conciseness, harmony, complexity and splendid insincerity.” Chess encourages artifice and for this emphasis on creative deception Nabokov considered it the writer’s game — even if it does tend to distract from their “linguistic adventures.”

Jorge Luis Borges was another writer who dealt with chess in literature. He was famously occupied by infinity in the form of labyrinths, immortality, circles, gods and endless libraries and in in his poem “Ajedrez” (“Chess”) we find similar preoccupations superimposed on the chessboard. From the pawns the poem moves back so the reader sees the guiding hands of the players, before retreating further so we see the guiding hand of God, before lapsing into an infinitely regressive lineage of divinities (“God moves the player, and he the piece / But what God behind him starts the scheme?”)

Chess in literature appears elsewhere— Lewis Carroll’s Through the Looking Glass, Samuel Beckett’s Murphy, which features a bizarre but hypnotic chess match between the protagonist and an asylum inmate — but we find few constants amid this sundry use of chess as metaphor. Depictions of queens tend to be uniformly sinister: the queen in Borges’s poem is encarnizada — vicious, cruel, bloodthirsty (this compared to the “feeble” king) — the Red Queen in Through the Looking Glass is “the cause of all the mischief,” and in Lolita Humbert relays with relish how he subjected his dozy nemesis to “the awful stabs of my formidable queen.” In many fictional chess matches there also seems to be a perverse, intoxicating satisfaction to be had in victory — and crushing tragedy in loss (“I like the moment when I break a man’s ego,” Bobby Fischer is supposed to have said).

For its seemingly endless potential as metaphor, chess in literature has enjoyed a long and rich history. Writers from the Middle Ages onwards have been drawn inexorably to the game, presenting through chess themes of romance, politics, theism, sanity and dozens more — a trend that is unlikely to end with contemporary literature.