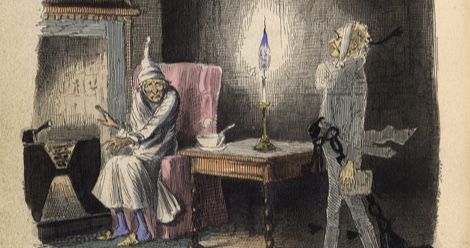 This fall, it seemed like summer outstayed its welcome. It was like that tactless guest at a party who sits on the couch drinking a beer after every other guest has left and the host is trying to find room for left over hors d’oeuvres in the refrigerator. Coffee shops pushed their pumpkin spice lattes, store windows hawked down jackets and leather boots, while I still sweated in my sandals and sundresses. Overnight, it was as if the summer heat performed an Irish goodbye—one day it was there and then next morning, it was gone.

With the abrupt exit of the sweltering heat and humidity, I put my beach reads away and took out some books more suited to corduroy and hot tea. Most years, I welcome the cooler temperatures by reading a Victorian novel. During the summer, I have no patience for lengthy sentences, caches of characters, and unknown family relationships. But, once the weather cools, bring on the sentimentality, the orphans, and the 19th century social commentary.

This year, I checked A Christmas Carol and Other Christmas Books by Charles Dickens out from the library. I have not read A Christmas Carol since I took a Dickens seminar my senior year in college. Even though these are “Christmas” books, I decided to revisit them in October.

By the bye, I realized that three of these books are actually the perfect books to read at this time of year! Listen to these titles: A Christmas Carol being A Ghost Story of Christmas, The Chimes: A Goblin Story, and The Haunted Man and The Ghost’s Bargain. These tales have more supernatural characters than Scary Stories to Tell in the Dark.

I present to you some quotes from these books that are better suited for Halloween than Christmas: 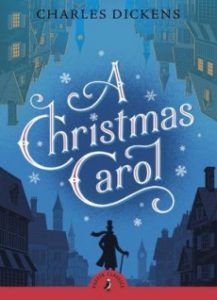 From A Christmas Carol

“Marley’s face…It was not angry or ferocious, but looked at Scrooge as Marley use to look: with ghostly spectacles turned up on its ghostly forehead.”

“The bells ceased as they had begun, together. They were succeeded by a clanking noise, deep down below; as if some person were dragging a heavy chain over the casks in the wine-merchant’s cellar. Scrooge then remembered to have heard that ghosts in haunted houses were described as dragging chains.”

“Though he looked the phantom through and through, and saw it standing before him; though he felt the chilling influence of its death-cold eyes…he was still incredulous.”

“The truth is, that he tried to be smart, as a means of distracting his own attention, and keeping down his terror; for the spectre’s voice disturbed the very marrow in his bones.”

“But how much greater was his horror, when the phantom taking off the bandage round its head, as if it were too warm to wear in-doors, its lower jaw dropped upon its breast!”

“Again, the spectre raised a cry, and shook its chains and wrung its shadowy hands.”

“Scrooge looked about him for the Ghost, and saw it not…He remembered the prediction of old Jacob Marley, and lifting up his eyes, beheld a solemn Phantom, draped and hooded, coming, like a mist along the ground, towards him.” 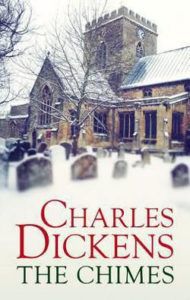 “He saw the tower, whither his charmed footsteps had brought him, swarming with dwarf phantoms, spirits, elfin creatures of the Bells.”

“Mysterious and awful figures! Resting on nothing…shadowy and dark, although he saw them by some light belonging to themselves – none else was there – each with its muffled hand upon its goblin mouth.”

“Again, again, the dread and terror of the lonely place, and of the wild and fearful night that reigned there, touched him like a spectral hand.”

“A blast of air – how cold and shrill! – came moaning through the tower. As it died away, the great Bell, or the Goblin of the Great Bell, spoke.” 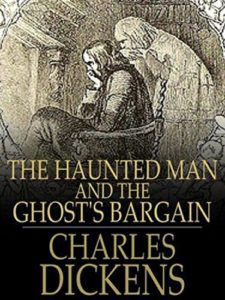 From The Haunted Man and The Ghost’s Bargain

“When little readers of story-books, by the firelight, trembled to think of Cassim Baba cut into quarters, hanging in the Robbers’ cave.”

“When twilight everywhere released the shadows, prisoned up all day, that now closed in and gathered like mustering swarms of ghosts.”

“Ghastly and cold, colourless in its leaden face and hands, but his features, and his bright eyes, and his grizzled hair, and dressed in the gloomy shadow of his dress, it came into his terrible appearance of existence, motionless, without a sound.”

“But, now, the haunted man turned, suddenly, and stared upon the Ghost. The Ghost, as sudden in its motion, passed to before the chair, and stared on him.”

“The Phantom, which had held its bloodless hand above him while it spoke…and which had gradually advanced its eyes so close to his, that he could see how they did not participate in the terrible smile upon its face, but were a fixed, unalterable, steady horror; melted before him and was gone.”

“[I]t was a ghostly place when all this life was faded out of it, and stared upon him like an emblem of Death.”