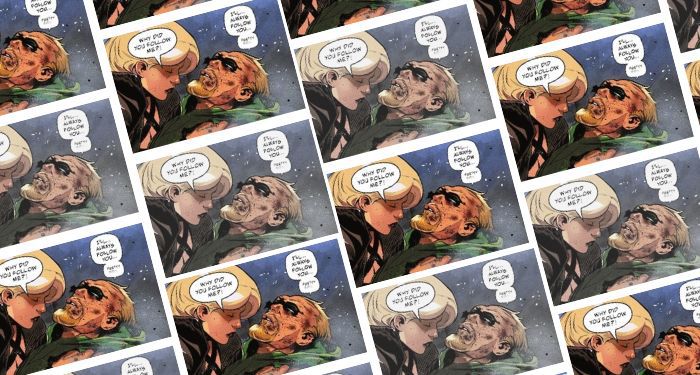 [Spoilers for Justice League #75 below. And also, like. On the cover of the issue.]

Justice League #75 by Joshua Williamson and Rafa Sandoval, which came out this April, ended fairly predictably. After all, the story was called “Death of the Justice League,” and DC’s marketing had made it clear for months that this issue kicked off their 2022 summer event, Dark Crisis, by killing off the current Justice League lineup and leaving the protection of the universe in the hands of the League’s children and successors.

It also ended with me chortling in glee.

Not because this issue was all that amazing, because it was mostly just a means to an end: everyone punches everyone else for 22 pages, and then everyone dies. (Though at least Sandoval’s art made them all look gorgeous while they did it.)

But this is the kind of character death I love.

Character death is a somewhat divisive topic in comics fandom. On the one hand, there are readers who want stories to be big and serious and have a seismic impact, always chasing that 1993 Death of Superman high. On the other hand, there are readers who are tired of bleak stories and constant events, and don’t like seeing their favorite superheroes routinely killed off.

“Death of the Justice League” is pretty much designed to annoy both sets of readers — the latter group because it unceremoniously slaughters 10 A-listers, and the former because it feels so completely ephemeral. I don’t think there’s a single comics fan who believes for even a second that these characters are going to stay dead past the summer. Hell, half of them are currently continuing to star in other comics!

The obviously temporary nature of this story means I don’t have to worry that I won’t ever get to read Clark Kent or Oliver Queen in a new comic again. They will clearly be back, and soon, which means I don’t have to be sad for me. Instead, I can enjoy being sad for the other characters, enjoying the safe catharsis of fictional grief with an underlying assurance that everything’s eventually going to be okay. To wit: the best thing in Justice League #75 by a country mile was a weeping Black Canary cradling a dying Green Arrow. That’s it! That’s the good stuff!

And now we get months of this. Lois Lane and Jon Kent grieving Clark! The Green Lantern Corps mourning John! Batman’s countless emotionally stunted children spiraling into self-destruction because they’re incapable of feeling their feelings! It is like candy to me.

And then…we get the heroes coming back. And that’s a whole ‘nother potential round of extremely satisfying crying as various characters (hopefully) exchange shocked, weepy hugs as if this hasn’t already happened many times over.

Many of my favorite stories hinge on character returns like this. “Quiver,” the story where Oliver Queen returns from the dead, is my favorite Green Arrow story of all time. I railed against the death of Damian Wayne in 2013, and I still think killing a 10-year-old on page is cheap, shlocky writing, but oh boy if the page of a resurrected Damian throwing himself into Bruce’s arms doesn’t get me every time. And over on the Marvel side of things, one of my very favorite Daredevil stories is “The Devil in Cell Block D,” which goes one further by having Daredevil believe his best friend Foggy Nelson has been murdered, while the reader knows perfectly well that Foggy is fine and can just enjoy Matt careening through vengeance and despair. This is also part of why I enjoy reading long runs of comics years after they were published, when I’ve been thoroughly spoiled and don’t have to worry if a character is gone for good.

Now, this doesn’t mean I love all character deaths in comics. Like I said, I found Damian’s to be a cheap, lazy attempt to shock, and pretty much all child deaths fall into this category (Lian Harper, Aquababy). And to be honest, there are so many problematic tropes involving the deaths of women, characters of color, and queer characters that a writer has to tread verrrrry carefully to make those work for me, especially since those characters are more likely to stay dead, at least for a good long while. I have to be confident that the character will come back, which straight white dudes created between 1939 and, oh, 1969ish invariably will.

Also, the return has to be satisfying. I have been eagerly awaiting the return of Roy “Arsenal” Harper (created 1941, a guaranteed resurrectee) since he was killed off in 2018’s Heroes in Crisis, and it’s been a huge swing and a miss. He’s been back for a year and a half now and hasn’t bothered to look for his missing daughter or tell his family or best friend that he’s alive, and his reunion with the Teen Titans happened off-panel! No one has cried! It’s like, why even bother? Kill him again and get it right this time!

But “Death of the Justice League” has ten chances to get it right. Surely at least some of them will have those good good tears.

I know some people get frustrated with the revolving door of death in comics, but I’ve made my peace with it. Back when I started reading comics 20 years ago, it was a truism that “no one stays dead in comics besides Jason Todd and Bucky Barnes,” which is absolutely hilarious when you consider how very alive and extremely popular those two angsty smokestacks are today. (Part of that popularity is because of how very good their resurrection stories were. Again, you’ve got to nail that…not dismount. Remount?)

Now the truism is that absolutely no one stays dead, and if that’s the case, let’s just have fun with it, you know? I don’t want a death I believe in. I don’t want a death that Changes Everything Forever. I want characters to die for…oh, let’s say between one issue and a year, and then I want them to come back to a cascade of joyful tears.

Additional bonus: the constant cycle of death and resurrection makes comics continuity even more bonkers than usual. Out of the 10 Leaguers who died in April, at least seven of them have died before, possibly eight — I don’t know Zatanna’s continuity well enough to say. Aquaman has died three times already! Wonder Woman only came back from the dead last year! Hawkgirl is literally famous for dying repeatedly! This is endlessly funny to me, and every time I get to use this reaction image is quite frankly a win:

In conclusion, I am fully prepared to embrace comics’ tendency to kill and resurrect heroes every summer if they are prepared to steer into all the over-the-top cathartic emotion and absolutely zany continuity snarls that should engender. This is a binding agreement, okay, DC and Marvel? We are making a pact here.

Now, bring on the tears.