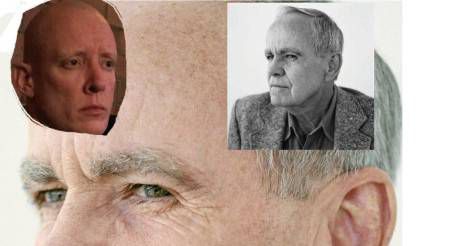 I’ve written about my obsession with Cormac McCarthy’s novel Blood Meridian on this site before, so I’ll spare you that lengthy preamble in this post, although scanning it will give you a good foundation for this post.

This is a story about a signed copy of that book, which is not easy to come by, since Cormac refuses to go anywhere, sign books, or really do any promotion besides the three interviews he has granted in something like three decades.

About six weeks ago I woke up to a text from my future (I’m getting married in October) mother-in-law Cindy Lovell, who is the Executive Director at the Mark Twain House in Hartford. “Just wanted you to know that I’m touring Cormac McCarthy’s sister and nephew through the house today! I’m going to tell her all about you!”

That brought my nerves to a boil, but I didn’t want to make too much of it. Then that night she called to tell us that she had indeed told Cormac’s sister about me, my obsession, my own book, etc, and apparently she kept saying, “Oh, he’ll love hearing this!” Again, I put it out of my head as quickly as I could and fought the urge to go tell everyone that I was en route to being best friends with him.

Three weeks passed and I wake up to another text from Cindy. “Do you have five minutes for good news?” I called and she said she’d just gotten a phone call from Cormac’s sister. She was going to see her brother at the McCarthy family reunion a couple of weeks later and wanted to know if I would like an inscribed copy of Blood Meridian. She also asked if I would send a copy of my book to her brother.

I started trembling for a few seconds and couldn’t feel my feet. I pictured their reunion being very much like one of the campfire scenes in Blood Meridian, and Cormac giving speeches like The Judge. The fantasy passed. They probably just sat around and ate S’mores like most people.

So, I said yes. I signed a book for him and mailed it to his sister. I also included a letter with a story that I’ll include at the end of this post. Then I tried not to think about it.

I’ll believe it when I see it.

Two weeks ago I was in Moab at my own family reunion, and out of cell range. When I got back into service I had two texts from Angela, my fiancee. Pictures of a package from Cormac’s sister! I quickly cut my vacation short, abandoning my family and driving home eight hours earlier than I’d planned on the next day.

It had really happened. Cormac McCarthy had signed a book to me. BLOOD MERIDIAN.

Things got fabulously out of hand on the drive. I figured I’d open the book and a plane ticket would fall out. “Josh, we’ve only got so much time left for collaboration. Please fly out and let’s be pals.”

When I got home I ran inside and saw the package. I have Tourette Syndrome, which makes me extremely twitchy, so I asked Angela to open it, rather than risk me experiencing a glitch and tearing a page out. And there it was: 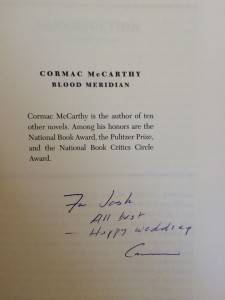 I have a lot of signed books, which I adore. I’ve been lucky enough to able to meet many of my favorite authors, and luckier still that they all turned out out to be great people in person. I got invited to play a show with the Rock Bottom Remainders. I spent a day as Stephen King’s bodyguard.

Wonderful experiences, all. But this was singular to me.

I had this book, an inscribed copy of the only real obsession I’ve ever had, because of a chain of the most random quirks and accidents. It suddenly felt like maybe the universe had a plan after all, and whoever was steering had decided that it was time for me to receive this gift.

I put my treasure in a fire proof safe. Then I considered going and buying a gun safe just to put the fire proof safe in. Then putting it in a bank vault. Then burying the bank.

Wrapping up, here’s the letter I sent to him, and it’s a story I hope he’s gotten a kick out of:

I wanted to tell you a quick story about the book in your hands.

In the spring of 2015 I was invited to give a talk about the value of life at a charter school in Utah. The school had experienced a tragic series of suicides and the students were in a desperate sort of healing mode.

After I was done, one of the teachers came up to me and said, “Hey, can we talk for a sec?”

He told me that two days earlier, he had walked into a Barnes and Noble in Salt Lake City and announced to a bookseller, “I just finished reading Blood Meridian and I need the opposite.” To hear him tell it, the bookseller immediately hand-sold him a copy of my book, The World’s Strongest Librarian.

He had no idea why Angela and I started laughing. I laughed so hard that it felt like I might never be able to stop, so I reeled it in before things got any more peculiar.

I loved writing my book and appreciated the bookseller’s support, but at that point I’d probably read Blood Meridian at least fifty times. I’ve never been able to stay away from it. It’s been a torment and a treasure, both my favorite and least favorite book. Every time I finish it I say “Never again.” I’d guess that not a day has gone by in the last 15 years where I didn’t read at least a page of it. Why? I’m not sure, and that’s the real fascination for me. I was an English major. I read a lot. I can explain why I like or hate just about anything literary, but if I’d ever had a real obsession that utterly defies my powers of explanation, it’s Blood Meridian.

(I’ve also got a whisky flask that says “Drink man, for tonight thy soul may be required of thee.”)

Anyway, I told him all of this at a rapid-fire tempo in full-blown evangelist mode, probably with the whites of my eyes showing and him backing away, sorry he’d said anything to begin with.

I’m not sure what it says about me, or you, but you’re my kind of guy, Cormac McCarthy.

Thanks for being you.

Oh, I also made this best friend collage, but I’m not going to send it to him. 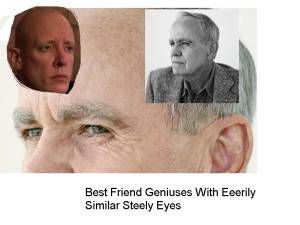