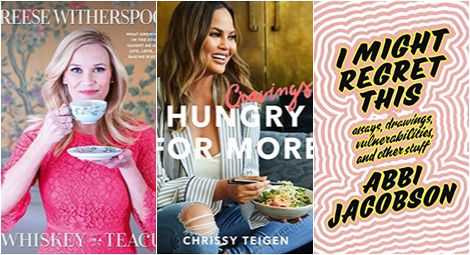 Celebrities are often these untouchable people. We see the characters they portray on the big screen and then we see their real lives on social media. In either of these respects, I find myself wanting to deeply know these people. I want to be their friends and I want them to give me life advice that helped them succeed or fail at whatever they’re doing.

So of course I want to read these memoirs and see the world through the celebrity’s eyes. What was it like growing up? How did you become the figure you are? What were the naysayers saying?

With that, here’s eight memoirs coming out in Fall 2018 that I hope you add to your reading lists. 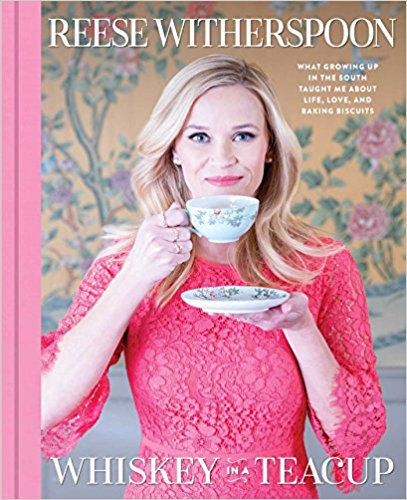 Whiskey in a Teacup: What Growing Up in the South Taught Me About Life, Love & Baking Biscuits by Reese Witherspoon

Reese Witherspoon’s grandmother Dorothea always said that a combination of beauty and strength made southern women “whiskey in a teacup.” We may be delicate and ornamental on the outside, she said, but inside we’re strong and fiery.

Reese’s southern heritage informs her whole life, and she loves sharing the joys of southern living with practically everyone she meets. She takes the South wherever she goes with bluegrass, big holiday parties, and plenty of Dorothea’s fried chicken. It’s reflected in how she entertains, decorates her home, and makes holidays special for her kids—not to mention how she talks, dances, and does her hair (in these pages, you will learn Reese’s fail-proof, only slightly insane hot-roller technique). Reese loves sharing Dorothea’s most delicious recipes as well as her favorite southern traditions, from midnight barn parties to backyard bridal showers, magical Christmas mornings to rollicking honky-tonks.

It’s easy to bring a little bit of Reese’s world into your home, no matter where you live. After all, there’s a southern side to every place in the world, right?

This Will Only Hurt a Little by Busy Philipps

A memoir by the beloved comedic actress known for her roles on Freaks and Geeks, Dawson’s Creek, and Cougartown who has become ‘the breakout star on Instagram stories…imagine I Love Lucy mixed with a modern lifestyle guru’ (The New Yorker).

Busy Philipps’s autobiographical book offers the same unfiltered and candid storytelling that her Instagram followers have come to know and love, from growing up in Scottsdale, Arizona and her painful and painfully funny teen years, to her life as a working actress, mother, and famous best friend.

Busy is the rare entertainer whose impressive arsenal of talents as an actress is equally matched by her storytelling ability, sense of humor, and sharp observations about life, love, and motherhood. Her conversational writing reminds us what we love about her on screens large and small. From film to television to Instagram, Busy delightfully showcases her wry humor and her willingness to bare it all.

“I’ve been waiting my whole life to write this book. I’m just so grateful someone asked. Otherwise, what was the point of any of it??” 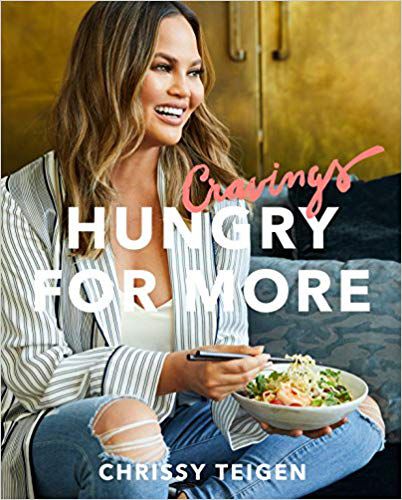 Cravings: Hungry for More takes us further into Chrissy’s kitchen…and life. It’s a life of pancakes that remind you of blueberry pie, eating onion dip with your glam squad, banana bread that breaks the internet, and a little something called Pad Thai Carbonara. After two years of parenthood, falling in love with different flavors, and relearning the healing power of comfort food, this book is like Chrissy’s new edible diary: recipes for quick-as-a-snap meals; recipes for lighter, brighter, healthier-ish living; and recipes that, well, are gonna put you to bed, holding your belly. And it will have you hungry for more.

In a life filled with meaning and accomplishment, Michelle Obama has emerged as one of the most iconic and compelling women of our era. As First Lady of the United States of America—the first African American to serve in that role—she helped create the most welcoming and inclusive White House in history, while also establishing herself as a powerful advocate for women and girls in the U.S. and around the world, dramatically changing the ways that families pursue healthier and more active lives, and standing with her husband as he led America through some of its most harrowing moments. Along the way, she showed us a few dance moves, crushed Carpool Karaoke, and raised two down-to-earth daughters under an unforgiving media glare.

In her memoir, a work of deep reflection and mesmerizing storytelling, Michelle Obama invites readers into her world, chronicling the experiences that have shaped her—from her childhood on the South Side of Chicago to her years as an executive balancing the demands of motherhood and work, to her time spent at the world’s most famous address. With unerring honesty and lively wit, she describes her triumphs and her disappointments, both public and private, telling her full story as she has lived it—in her own words and on her own terms. Warm, wise, and revelatory, Becoming is the deeply personal reckoning of a woman of soul and substance who has steadily defied expectations—and whose story inspires us to do the same. 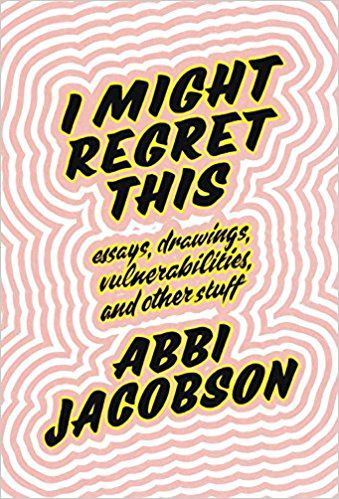 I Might Regret This: Essays, Drawings, Vulnerabilities, and Other Stuff by Abbi Jacobson

When Abbi Jacobson announced to friends and acquaintances that she planned to drive across the country alone, she was met with lots of questions and opinions: Why wasn’t she going with friends? Wouldn’t it be incredibly lonely? The North route is better! Was it safe for a woman? The Southern route is the way to go! You should bring mace! And a common one…why? But Abbi had always found comfort in solitude, and needed space to step back and hit the reset button. As she spent time in each city and town on her way to Los Angeles, she mulled over the big questions—What do I really want? What is the worst possible scenario in which I could run into my ex? How has the decision to wear my shirts tucked in been pivotal in my adulthood? In this collection of anecdotes, observations and reflections—all told in the sharp, wildly funny, and relatable voice that has endeared Abbi to critics and fans alike—readers will feel like they’re in the passenger seat on a fun and, ultimately, inspiring journey. With some original illustrations by the author.

There comes a time in every sitcom actress’s life when she is faced with the prospect of writing a book. When Ellie Kemper’s number was up, she was ready. Contagiously cheerful, predictably wholesome, and mostly inspiring except for one essay about her husband’s feet, My Squirrel Days is a funny, free-wheeling tour of Ellie’s life—from growing up in suburban St. Louis with a vivid imagination and a crush on David Letterman to moving to Los Angeles and accidentally falling on Doris Kearns Goodwin.

But those are not the only famous names dropped in this synopsis. Ellie will also share stories of inadvertently insulting Ricky Gervais at the Emmy Awards, telling Tina Fey that she has “great hair—really strong and thick,” and offering a maxi pad to Steve Carell. She will take you back to her childhood as a nature lover determined to commune with squirrels, to her college career as a bench-warming field hockey player with no assigned position, and to her young professional days writing radio commercials for McDonald’s but never getting paid. Ellie will guide you along her journey through adulthood, from unorganized bride to impatient wife to anxious mother who—as recently observed by a sassy hairstylist—“dresses like a mom.” Well, sassy hairstylist, Ellie Kemper is a mom. And she has been dressing like it since she was four. 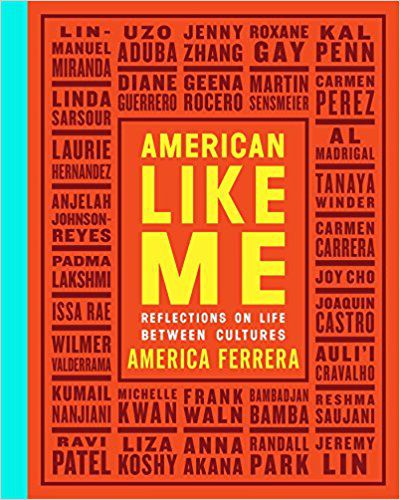 American Like Me: Reflections on Life Between Cultures by America Ferrera

America Ferrera has always felt wholly American, and yet, her identity is inextricably linked to her parents’ homeland and Honduran culture. Speaking Spanish at home, having Saturday-morning-salsa-dance-parties in the kitchen, and eating tamales alongside apple pie at Christmas never seemed at odds with her American identity.

Still, she yearned to see that identity reflected in the larger American narrative.

Now, in American Like Me, America invites thirty-one of her friends, peers, and heroes to share their stories about life between cultures. We know them as actors, comedians, athletes, politicians, artists, and writers. However, they are also immigrants, children or grandchildren of immigrants, indigenous people, or people who otherwise grew up with deep and personal connections to more than one culture. Each of them struggled to establish a sense of self, find belonging, and feel seen. And they call themselves American enthusiastically, reluctantly, or not at all.

Ranging from the heartfelt to the hilarious, their stories shine a light on a quintessentially American experience and will appeal to anyone with a complicated relationship to family, culture, and growing up.

One of the most celebrated, beloved, and enduring actors of our time, Sally Field has an infectious charm that has captivated the nation for more than five decades, beginning with her first TV role at the age of seventeen. From Gidget’s sweet-faced “girl next door” to the dazzling complexity of Sybil to the Academy Award-worthy ferocity and depth of Norma Rae and Mary Todd Lincoln, Field has stunned audiences time and time again with her artistic range and emotional acuity. Yet there is one character who always remained hidden: the shy and anxious little girl within.

With raw honesty and the fresh, pitch-perfect prose of a natural-born writer, and with all the humility and authenticity her fans have come to expect, Field brings readers behind-the-scenes for not only the highs and lows of her star-studded early career in Hollywood, but deep into the truth of her lifelong relationships—including her complicated love for her own mother. Powerful and unforgettable, In Pieces is an inspiring and important account of life as a woman in the second half of the twentieth century.

What memoirs are you excited about?