HBO is adapting Ray Bradbury’s iconic dystopia Fahrenheit 451 as a film. For fans of the original, there are reasons to be nervous—as well as reasons to be ecstatic. For one thing, especially after seeing him act in Black Panther, I can’t wait to see Michael B. Jordan as fireman-turned-rebel Guy Montag (with Michael Shannon playing Captain Beatty).

Fahrenheit 451 is a dystopia that we should be thinking about right now, and this is the perfect time for this adaptation. It is a book about the ability to think freely in a society that burns books. In the novel itself, they tell us enough about the past to realize how slow this turn was, a turn towards technology and away from giving people the time to think, because thinking allowed them to rebel, argue, debate. Fahrenheit 451 is the temperature at which paper burns. The firemen’s flame throwers do it quickly, but we can think, too, about the slow turning up of the temperature. At what point does a society reach the point of burning books?

I’ve read that many readers are skeptical about adapting an anti-technology book to be on a screen itself, but on reread of the text, I find that a misinterpretation of Bradbury’s work. Faber tells Montag, “It’s not books you need, it’s some of the things that once were in books…The same infinite detail and awareness could be projected through the radios and televisors, but are not.” The never-ending noise and distraction of Montag’s world, where you even go to sleep buried in a televisor’s world, is one, rather, that doesn’t allow you to think, that gives you useless and mindless media that seems to mean nothing but that gives you no time alone. It makes us think about the kind of media we consume.

In Bradbury’s short story “The Pedestrian,” a man is arrested for walking by himself late at night, simply because the police do not understand why he is doing it. That thread carries over to Fahrenheit. The true error of this world is that people cannot think, let alone think freely or dissent. Books are meant to keep us humble, to encourage our skepticism, to show us the rest of the world. Without them or time to think, the mind can’t remember. The society can’t remember its past. Montag can’t remember where he first met his wife. People don’t remember that, in fact, there was a time when houses weren’t fireproof, and firemen put out fires instead of starting them.

That inability to think doesn’t just prevent dissent. It encourages apathy. And the speed at which things happen encourages people not to slow down, not to think—not to pause, or wonder. Mildred attempts suicide and doesn’t remember it the next morning—the men who come to attend to her made dozens of such calls each night, and aren’t even doctors. People drive upwards of 100 mph and regularly run people down, sometimes for fun. There have been two nuclear wars so far since 2022, but people don’t mind—the soldiers come and go so quickly, and the planes are just more noise in the sky. On reread, this is also a feminist dystopia, a horror of the 1950s housewife—women don’t work, they stay at home with nothing to do but bury themselves in noise. Mildred is an empty shell, with no time to think—Clarisse, the teenager who Montag meets who introduces him to the small joys of nature and thought, is her foil. 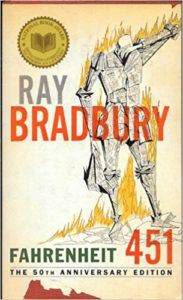 I think that this adaptation has a lot of potential in reflecting on today’s society, and on warning us—as the news we get each day becomes more clearly biased, as the information we’re fed becomes more mainstream and more uniform, as the White House press secretary tells us one version of what happened—to question, and to not allow that media to take over from our abilities to think for ourselves. It’s a mistake to remember Fahrenheit 451 as solely a defense of books. It’s about defending thinking, and dissent, and the ability to escape mainstream media when you need or want to; it’s about space for nonconformity, and about not letting a whitewashed media or history erase your knowledge of the past.

My only worry about this adaptation, as the worry of all readers seeing a book adapted, is that they’ll feel the need to change things. That the ending won’t be exciting enough for them (it’s one of my all-time favorite book endings), that the pace of the beginning will seem too slow, or that they won’t recognize the dystopian nature of what’s happening to the women in it. But that’s always the worry with adaptations, and this is the perfect time for a film adaptation of this book. I can only hope that the same gritty darkness of the trailer will prove to carry through to a solid and careful adaptation.