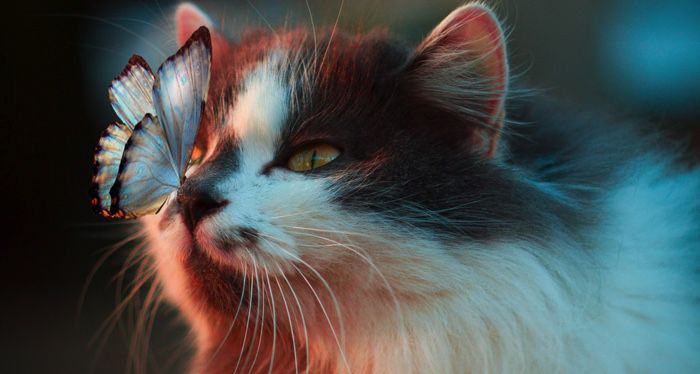 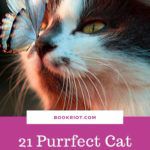 I don’t know what came first: my love of cats or my love of books. I suspect they were intertwined, as I grew up fascinated by the majestic felines I saw in picture books and read about in my early readers. Books and cats are just the perfect pairing! And I’m clearly not alone, as you’ll see in this list of the best cat books for kids. These 21 cat books for kids feature felines in all their glory, mischief, and magic. 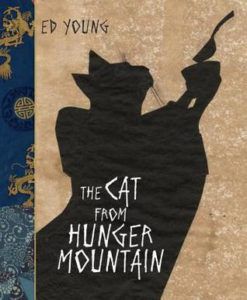 The Cat from Hunger Mountain by Ed Young

From Caldecott Medalist Ed Young, The Cat from Hunger Mountain is a compelling fable about greed and humility. A lord cat lives high on a mountain, living a gluttonous life that reflects his wealth. However, when a drought sweeps through the region, the lord’s lifestyle is sorely tested. An encounter with a monk helps put things in perspective. 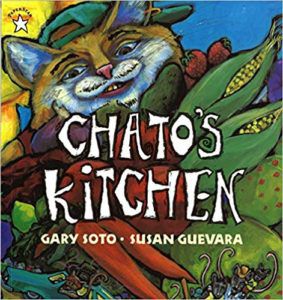 Get ready to work up an appetite in this sensory cat picture book! A trickster at heart, Chato is delighted when a family of plump mice moves into his East Los Angeles barrio. Chato and a buddy cook up a scheme to invite the mice over for a scrumptious dinner and then feast on them as desert, but it doesn’t quite work out that way when the mice bring their big, tough dog friend along. This picture book is a great way to introduce kids to Latin cuisine and a new language, as the text blends Spanish and English and includes a glossary. 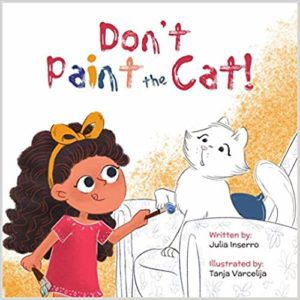 Don’t Paint the Cat! by Julie Inserro and Tanja Varcelija

Everybody makes mistakes, but it’s how we forgive others and especially ourselves that counts. That’s the special lesson you’ll find in Don’t Paint the Cat! Nyla just loves painting but gets a bit carried away and paints her white cat. In the heat of the moment, her mother bans painting, but then realizes maybe “never” isn’t the best approach. This diverse picture book about cats is a must-have for children learning forgiveness and emotional regulation.

This poignant, educational picture book introduces children (and their parents!) to “fishing cats,” a special kind of wild cat native to South and Southeast Asia. The Little Lost Fishing Cat follows a family who take in Felena, a fishing cat, but then abandon her in a heavily forested area. Felena draws on her courage, grit, and resilience to learn the ways of the wild and finds a new home. The Little Lost Fishing Cat is ripe for discussion, with themes of environmentalism, conservation, global cultures, and so much more. 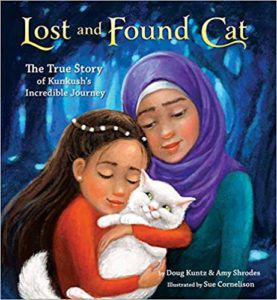 This timely tale spotlights the incredible true story of Kunkush, the beloved pet cat of an Iraqi refugee family. Kunkush’s humans couldn’t bear to leave him behind, so they hid him away on their trip, but he becomes separated from them on their journey to Greece. Many communities band together to help reunite the family and their furry friend in this heartwarming cat book for kids. 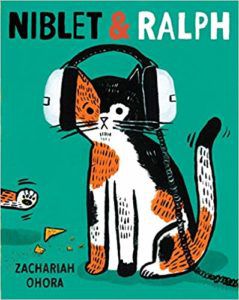 Niblet and Ralph by Zachariah OHora

The artwork in this picture book about cats pops with life. Niblet and Ralph are two cats who live in apartments across from each other. They have a great friendship and wave to each other from their windows. But when they decide to meet, an unexpected switch takes place! 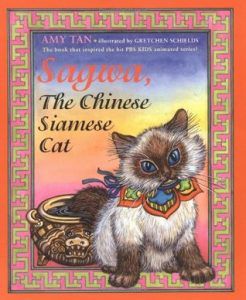 Legendary author Amy Tan braids Chinese culture and history of the 1900 Qing Dynasty in this delightful picture book folktale about Sagwa, a Siamese cat. Sagwa’s charming story is presented as the origins of the distinct markings on Siamese cats. This picture book was adapted for an animated PBS kid’s show in the aughts. 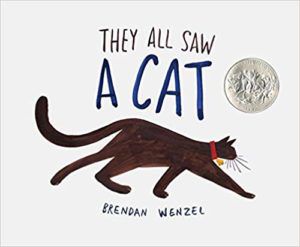 They All Saw a Cat by Brendan Wenzel

This groundbreaking, surrealistic picture book shows a cat moving through its environment from the perspective of different creatures observing it: a mouse, a bird, and so on. A message of tolerance comes through: we should all accept that our viewpoints are personal, and not necessarily more or less correct than anyone else’s. 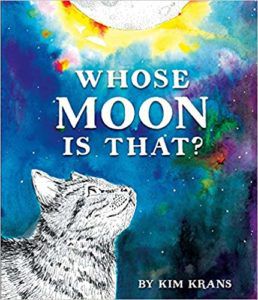 Whose Moon Is That? by Kim Krans

“Sublime” is the word I’d use to describe this picture book by Kim Krans, a notable oracle and tarot deck author-illustrator. In Whose Moon Is That?, a cat witnesses a stunning full moon. Against a watercolor landscape, a whole set of other creatures witness the moon with their own unique perspective. This cat book for kids shows how we can all hold separate opinions and celebrates individuality. 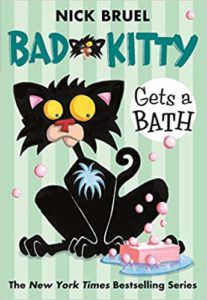 Bad Kitty Gets a Bath by Nick Bruel

Nick Bruel’s long-running chapter book series follows the adventures of Bad Kitty, a sassy, grumpy cat who gets into all sorts of mischief. Each book is packed with interesting fonts, fun illustrations, offbeat humor, and an engaging story that will keep new readers turning the pages. Start with one of the earliest books, Bad Kitty Gets a Bath, which teaches kids how to care for a pet with compassion and grace. 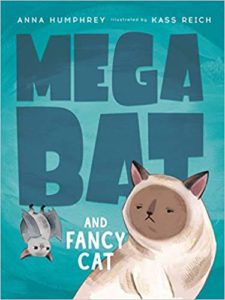 Megabat and Fancy Cat by Anna Humphrey and Kass Reich

The second installment in the chapter book series Megabat features a new nemesis for the quirky bat from Borneo who makes a new life in Canada. When his human Daniel receives Priscilla, a beautiful but snobby cat, for Christmas, Megabat’s home dynamics shift a bit too much for his liking. Megabat and Fancy Cat is a great pick for kids adjusting to a new sibling or other changes in their home structure. 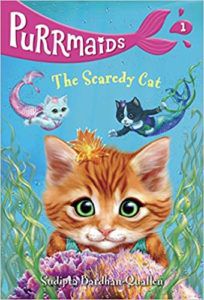 Mermaids and kittens…could there be a better combination? This adorable chapter book series about cats who also have mermaid abilities is one to marathon read. In The Scaredy Cat, we meet three purrmaid friends: Coral, Shelley, and Angel. While Shelley and Angel are eager to go discover a treasure, Coral is nervous about leaving home. Bardhan-Quallan’s cat chapter book offers lessons on finding the courage to leave our comfort zones. 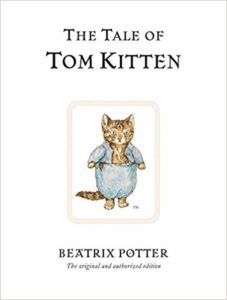 The Tale of Tom Kitten by Beatrix Potter

Still charming after all these years, The Tale of Tom Kitten is a wonderful early reader for children just learning to read. Tom Kitten gets himself into a right mess with his siblings in this quick little tale. Anyone who loves stories about cat mischief will enjoy this light-hearted cat book for kids. Potter’s book is the eighth in her series and features familiar faces. 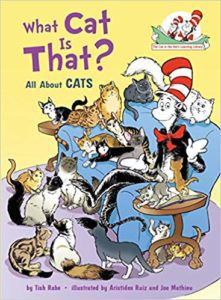 What Cat Is That? by Tish Rabe, Aristedes Ruiz, and Jon Mathieu

Dr. Seuss’s classic kitty tale continues with this cat chapter book, the third in The Cat in the Hat’s Learning Library series. What Cat Is That? incorporates cat facts and figures into the story, making this a good educational pick for kids seeking more information about felines. 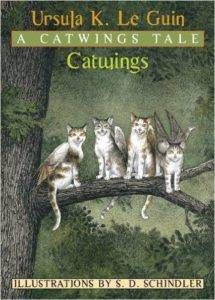 You might know fantasy master Ursula K. Le Guin from her adult fantasy, but did you know she’s also penned a delightful cat story for kids? In Catwings, Le Guin follows a group of winged kittens who are able to fly as they search for a new home. The series, composed of four books, is bursting with magical elements and adorable cats. Catwings is a good choice for younger middle grade readers and kids wanting to ease into fantastical tales. 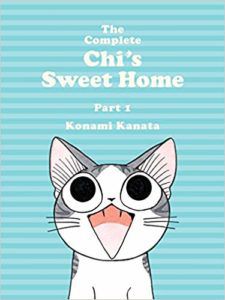 Looking to introduce your child to graphic novels? Trying to inspire some fun in reading? Definitely check out The Complete Chi’s Sweet Home by Konami Kanata. This bestselling manga series from Japan has become an international sensation, and it’s not hard to see why. Chi the cat’s exciting adventures in domesticity are hilarious and bursting with energy. Part 1 is an omnibus edition collecting the earliest comics and is the best place to start. 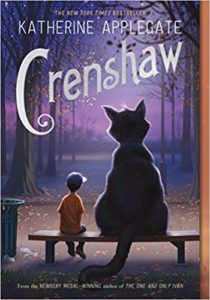 If it’s a Katherine Applegate novel, you know it’ll be totally absorbing and shot through with the feels. And in Crenshaw, Applegate delivers. This gritty yet lyrical tale tells the story of Jackson, a boy whose family is down on their luck and headed towards homelessness. Jackson strikes up an unexpected friendship with Crenshaw, a giant cat who offers him kindness, comfort, and a listening ear. But is spending time with an imaginary friend an escape from reality or a way to process it? 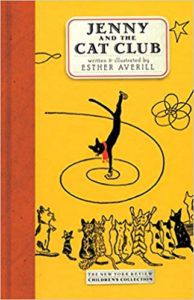 Jenny and the Cat Club by Esther Averill

Esther Averill’s midcentury Jenny’s Cat Club series is an enduring classic. In the first book, Jenny and the Cat Club, shy Jenny must learn to overcome her anxiety and find the self-confidence she needs to try out for the exclusive Cat Club made up of Greenwich Village kitties. Jenny and the Cat Club is a winning story about conquering nerves, celebrating our unique gifts and talents, and navigating social situations. 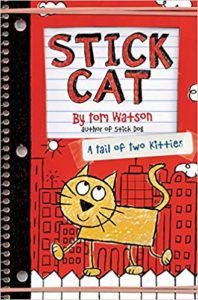 Stick Cat: A Tail of Two Kitties by Tom Watson

Stick Cat: A Tail of Two Kitties kicks off a humorous middle grade series about a kitty named Stick Cat. Watson’s funny writing and stick-figure illustrations make this an entertaining book perfect for reluctant readers and fans of Diary of a Wimpy Kid, Big Nate, and Dork Diaries. 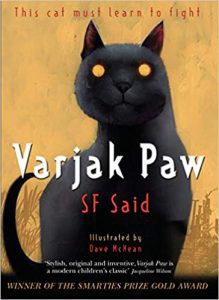 S.F. Said weaves a compelling cat tale in Varjak Paw. The titular character, Varjak Paw, is forced to venture Outside, farther than he’s ever gone before, when an evil man moves in with his two cats and causes trouble. Varjak adjusts to life beyond his comfort zone and even uncovers a secret in the city.

For more cat books for kids and kid lit features here on Book Riot, be sure to check out: