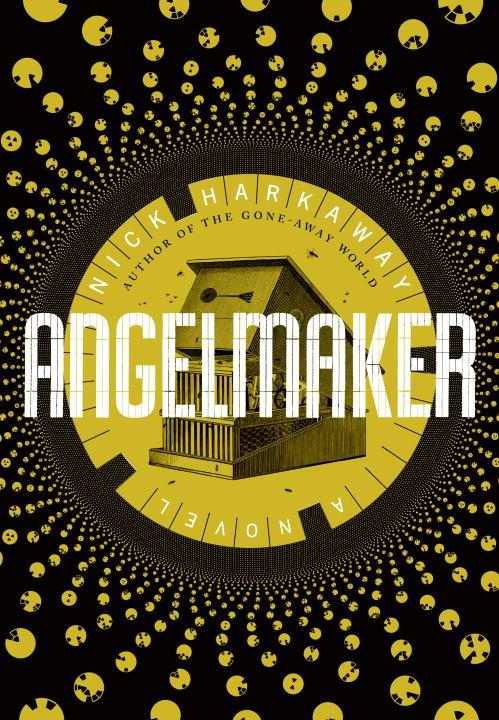 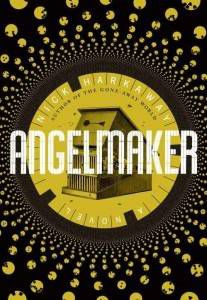 Nick Harkaway’s nostalgic-noir novel Angelmaker has been known to inspire rhapsodies among many of the Book Riot contributors, and several of us have had the movie playing in our heads since we first picked it up. Which should help explain the below transcript of an actual conversation that took place the other night over pierogies in Brooklyn, between contributors Jenn Northington and Ali Colluccio. If you haven’t read Angelmaker yet, go now! Go quickly! There are no spoilers below, but it probably won’t make much sense. Also, if you read it first, you can come back and argue with our casting choices in the comments.

AC: All day in my head I’ve been casting the Angelmaker movie.
JN: Tell me!
AC: Ok. So I think that even though she’s not quite old enough, Helen Mirren should be older Edie. And Emily Blunt for younger Edie. You know, the mean secretary from The Devil Wears Prada? And I kind of want Idris Elba to be Joe Spork. But I’m not sure that works. But I want him in it!
JN: Not as Joe Spork. He could be Shem Shem Tsien though.
AC: Ooh, he could! And I think Tom Hiddleston should be Vaughn Parry. Not Loki-Hiddleston, normal Hiddleston.
Jenn: Maybe. And who would be Polly Cradle? 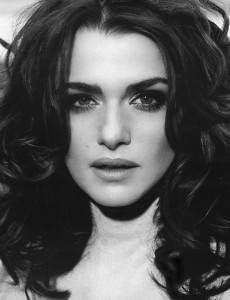 AC: I am thinking Rachel Weisz.
JN: Yes! She’s the right look and the right amount of bad-ass.
AC: And if Clive Owen is Joe Spork, Rachel Weisz is totally Polly.
JN: Clive Owen!? Not Clive Owen. First of all he’s too old. Second of all he’s not doofy enough.
AC: But he’s the right amount of tall.
JN: Yes, but not the other things. Who would be Mercer Cradle?
AC: Jude Law.
JN: NO!
AC: Yes! He’s all the suave.
JN: But too pretty, waaaay too pretty to be Mercer Cradle. Mercer has to be suave, but not pretty-suave. What if it was someone like Matt Smith? Or Chris Eccleston?
AC: Oh my god, I take back Tom Hiddleston, Eccleston should totally be Vaughn Perry.
JN: And then Hiddleston is Mercer? I don’t know, still too pretty. What about Benedict Cumberbatch?
AC: No, I don’t want him to be in this movie. The Sherlock mania is just too much! Although, ok, he actually might be a good Mercer. Because he’s kind of awkward-looking, but he can be, like, “BOOM! I know shit!” Also, I keep picturing Simon Pegg and Nick Frost as Titwhistle and Cummerbund, ‘cause they already have that comic duo thing going, and the visual is about right, but I think they might be too silly.
JN: [lost in visions of this for a moment] Ok, back to Joe Spork.
AC: Matt Smith? No, too young.
JN: And too skinny, Joe is a big guy. Too bad Gerard Butler is the wrong age.
AC: Sadly, yes. And Kevin McKidd is too Scottish. Although I guess Joe could be Scottish.
JN: Or he could do a different accent! But no, not quite right.
AC: And by the way, Marion Cotillard is Frankie.
JN: Ooooh, yes. What about Cousin Matthew for Joe?
AC: Huh, maybe…. what about Andrew Lincoln, the sign guy from Love Actually?
JN: Oh man, you know what? Chiwetal Ejiofor would make an awesome Joe Spork.
AC: No, because he’s always … the dude that’s hunting River. He’s so bad-ass though, I do love him. But anyway! Jason Statham is Billy Friend. Also, Guy Ritchie is directing this.
JN: Can Guy Ritchie do steampunk?
AC: He totally can. The Sherlock movies had a bit of that.
JN: That’s fair. You know who else would be good, is Guillermo Del Toro. He did Hellboy and that labyrinthy movie.
AC: Oh, true, he’d be good at the Lovelace and stuff. Maybe both of them — I mean, it turns into a Guy Ritchie movie at the end.
JN: What about one of the Weasley brothers for Joe Spork?! 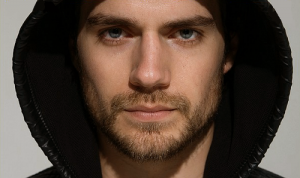 AC: No, I know! The dude that’s playing Superman!
JN: Who?
AC: He was in The Tudors.
JN: Henry Cavill?
AC: Yes! Superman is Joe Spork! Yes yes yes. But that means no Rachel Weisz, too much of an age difference. It also knocks Kate Winslet out.
JN: Aaahhhh who is Polly?! This is going to drive me nuts.
AC: There’s the actress who played the crazy lady on Luther…
JN: OH MY GOD WHAT ABOUT KAT DENNING?
AC: No, she’s not British.
JN: She could pretend to be British!
AC: No, she’s not polished enough.
JN: She could pretend to be polished! And she’s so tiny and sassy and curvy! And she’d look really adorable next to Henry Cavill.
AC: By that reasoning, I could be Polly
JN: [glares] AC: I love Kat Denning, but not in the same ways that I love Polly.
JN: You’re just being difficult. But the crazy lady from Luther would be ok. She could do not-crazy. And she could smolder.
AC: She could totally smolder. Kat Denning can’t smolder. Except watch, this is where five guys post pictures of her in the comments, from GQ, smoldering.
JN: [snort] AC: SYBIL.
JN: Sybil! Wait, what?
AC: Sybil! From Downton Abbey! Sybil! We gotta look up that chick’s name. 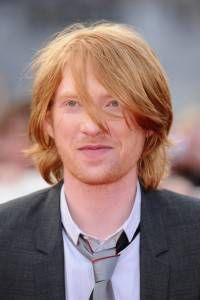