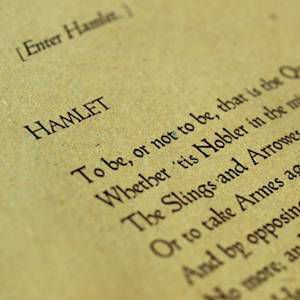 When the Tonys ended a couple weeks ago, I found myself adding a couple new plays to my mental list.  This was in part because I wasn’t near a computer, and in part because not all of the plays that were mentioned at the popular awards show have been published.  Some of them are based on source material that I plan on reading the heck out of soon, and some will probably not ever go into mass-production. If they do, I will be sure to pick them up, because I love reading plays.

There’s a lot that happens in a very small amount of time, and they’re quick to read and process–it shouldn’t take you more than a couple hours to read a play. You employ a large amount of your imagination because you have to do more inference instead of reading lots of description and internal monologue. You create your own setting, because only the most detailed playwrights include lengthy descriptions in the stage directions. Plays are, in short, a challenge to the inner eye and make you do a lot of work for the very short amount of time you are engaging them.

A lot of my friends–even the readers–look at me funny when I they see me reading a play.

The act of reading plays is something most people think should be abandoned once you’ve earned your Liberal Arts degree. Plays are published, the consensus is, to be performed. You shouldn’t read a play; you should go see it. They’re the complete opposite of any giant movie franchise based on a book or series.

They wouldn’t have cut out S.P.E.W. if Harry Potter had been a play. (We’ll skip the part about almost every film adaptation of a Shakespeare play ever having at least one line cut.)

You can’t figure out what the character is really thinking if you’re not watching an actor portray them on stage.

Reading a play before seeing it takes away the shock and surprise when you see it performed later.

But what about those of us who don’t live in sprawling metropolises filled with theater, allowing us to see everything from Twelfth Night to War Horse? Who only come across a new play in a library or bookstore (or while watching the Tonys)? What about those of us interested in random shows that haven’t been staged in years?

Of COURSE I want to read obscure plays. Blame the liberal arts degree. Tom Stoppard translating Pirandello? Yes, please! Oh, you found a used copy of Equus? I would rather enjoy that particular experience without a naked Harry Potter galloping across the stage, thanks. Is Tennessee Williams better without Marlon Brando screaming? Let’s find out.

And then there are those that lose something when you’re not looking at them in their written format. For Colored Girls…is technically a “choreopoem”, verse presented in recitation. The movie…sort of just got turned into another movie.

You will almost always get more from seeing a play performed than only reading it. The complete joy The Monster experiences as he gradually learns to move, then crawl, then stumble, then run, is probably not so well presented in stage directions as it is by either Jonny Lee Miller or Benedict Cumberbatch. The utter betrayal felt by the Prince of Danes in Hamlet or the slapstick physical comedy by everyone in Shakespeare in Hollywood are well expressed in words, but better expressed by people.  And sure, the steadfast intensity of Ruth Younger is going to be more palpably felt through any of the differing characterizations of Ruby Dee, Audra MacDonald or Sophie Okonedo than they might when you are picking them up on paper.

Some of them will leave you utterly confused without someone performing them in front of you.  (I’m looking at you, Martin McDonagh).

But something has to be said for reading plays, to understanding the text, to having those words performed in your own head, in your own voice, before you hear them in someone else’s.

And that can make all the difference in any experience.