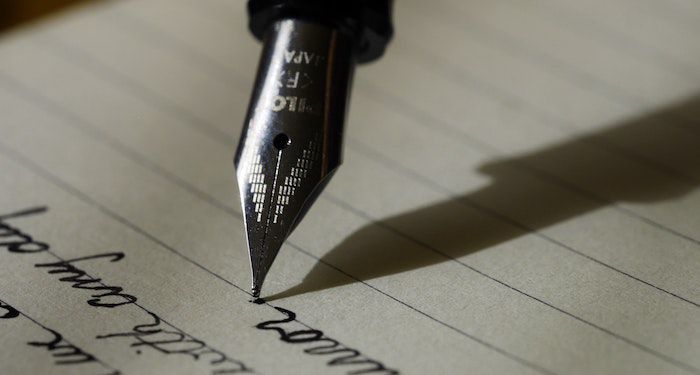 I’ve always loved reading letters. Whether they are addressed to me or to somebody else, whether they are real or fictitious, there is something special about being privy to a person’s thoughts and emotions through their own hand. By their very nature, letters are social objects; and yet, they are also intimate to a degree that precious few genres can achieve. Emily Dickinson’s words on this topic continue to reign supreme: “A letter always seemed to me like immortality because it is the mind alone without corporeal friend”.

Of course, I don’t mean to suggest that we should go back a century and give up emails and texts. Contemporary communication, with its ease and immediacy, is a gift that those who came before us – those whose loved ones moved across the world, or who moved away from the people they loved themselves– would have treasured. But I do hope to make a case for breaking out the pen, or quill and ink if you really want to go all out, and writing more letters. After all, writing letters has many, many advantages. Due to space constraints, I’m only going to focus on two here. But I hope they are enough to kindle a spark, and that you will find yourself writing (with a pen, not a keyboard) “Dear friend” very soon.

To Connect With Others

Okay, okay, I hear you. Can’t we do that through email and social media? The answer is yes, but with a caveat. Social media has character limits. And email, to me at least, has always felt impersonal. A wall of text, all identical letters and perfectly grammatical writing. Or almost perfect – we are, in fact, still human.

On the contrary, a letter that you can hold in your hands will inevitably carry a little bit of the writer in it. It’s in the slightly slanted writing, in the smudges of ink from where their hand brushed the paper, in the accidental anacoluthon from when their mind shifts gears and leaves a sentence unfinished before starting a new one. This is all part of the connection, the knowing that there is somebody on the other side who bent over the sheet of paper and dedicated a block of time to communicate with you.

The act of writing to somebody is therapeutic. In The Color Purple, Celie deals with her life by writing letters to God. I find it interesting and very telling that she chooses to write letters instead of a journal: Celie, in the midst of her loneliness and grief, surrounded by abusers, wants to connect with another living being. Because there’s nobody in her life she can turn to, she writes her letters to God. As she puts it: “long as I can spell G-o-d I got somebody along”. Later, when her belief in God fades, she writes to Nettie.

Nettie herself, even while amongst people who like and respect her, continues to write to her sister long after she accepts that Celie is not reading them. Again: the sisters could have been writing journals. They didn’t because telling themselves that somebody was on the other side reading them was part of what kept them going. And in fact, it was by finding Nettie’s letters that Celie could finally let the rage she’d been bottling up through a lifetime of abuse overflow.

To Process Your Thoughts and Feelings

The view on letter-writing tends to be practical: people write to get messages across. While this is true, it’s not the whole story. Pouring one’s thoughts and emotions onto paper often acts like a valve: it can take the poison out of it. We can infer that this was the case for Mr. Darcy in Pride and Prejudice: at the close of the novel, when he and Elizabeth are discussing the letter he wrote after that trainwreck of a first proposal, they have a telling exchange.

“When I wrote that letter,” replied Darcy, “I believed myself perfectly calm and cool, but I am since convinced that it was written in a dreadful bitterness of spirits.”

“The letter, perhaps, began in bitterness, but it did not end so. The adieu is charity itself.”

I believe that it was the act of writing this letter that filtered the anger out of Darcy. By going through his thoughts and feelings on paper, his resentment vanished. Good thing for him, too – I don’t see Elizabeth accepting even a second proposal otherwise.

In The Color Purple, Nettie writes:

“I remember one time you said your life made you feel so ashamed you couldn’t even talk about it to God, you had to write it, bad as you thought your writing was.”

Celie could have talked to God, silently or out loud, but she didn’t. She chose to write. Putting quill to paper, she found the courage to let herself feel her sorrow. As Nettie’s letter continues, she states that she can now relate:

“Well, now I know what you meant. (…) When I don’t write to you, I feel as bad as I do when I don’t pray, locked up in myself and choking on my own heart.”

Nothing good has ever come from choking down on your feelings. Writing their letters helped both Celie and Nettie come to terms with theirs.

Let’s Get To Writing Letters

I’m not the only one who loves reading letters. Look at some popular books of the last couple of decades: The Guernsey Literary and Potato Peel Pie Society, The Downstairs Girl, and Dear Mrs. Bird are only some of the (at least partly) epistolary novels that have captured the public’s imagination recently. Why not channel the spirit of their characters and get to writing letters ourselves?