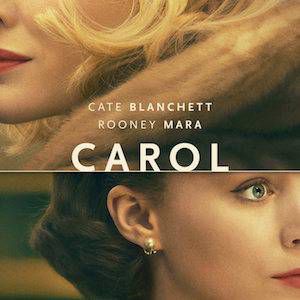 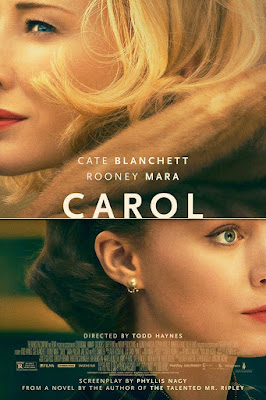 Patricia Highsmith’s 1953 novel The Price of Salt did something no other lesbian or gay novel had done: it gave its protagonists a happy ending. Highsmith (who understandably published under a pseudonym) wrote years later:

Prior to this book, homosexuals male and female in American novels had had to pay for their deviation by cutting their wrists, drowning themselves in a swimming pool, or by switching to heterosexuality (so it was stated), or by collapsing—alone and miserable and shunned—into a depression equal to hell.

Highsmith struck back at this cultural narrative at a time when the idea of two same-sex persons having any kind of normal life together seemed at best highly unrealistic. Her book is optimistic while remaining grounded in the realities of the day. Carol, who is getting a divorce and fighting for custody of her child, struggles between maintaining her true identity, and not being forced from her daughter’s life. Therese, the girl she falls in love with, seems to be following a conventional pattern of life with an average job and an average boyfriend, until she meets Carol, and she is suddenly faced with a world of decisions.

Highsmith’s novel depends on the much younger and much less worldly Therese’s perspective, which keeps Carol at a distance as a cold and beautiful goddess who seems to enjoy having Therese around, but never truly allows her intimate knowledge of herself. The film version, starring Cate Blanchett and Rooney Mara as Carol and Therese, does a beautiful job of balancing both the women’s points of view, allowing them their own space to grow and have their own story, while keeping them connected — not because they have to be, but because they choose to be. More than most relationships, two women in love in the 1950s had to make a deliberate choice to be together, and director Todd Haynes makes it clear that both Carol and Therese enter the relationship with their eyes wide open.

Because Carol is older and much wealthier than Therese, their relationships could so easily feel one one-sided, unfair, or exploitative but instead it is meticulously balanced. I won’t say when or how, because that is a beautiful thing to watch unfold throughout the film, but these are two people who by the final frame know each other, and love each other despite and because of it all.

The Price of Salt was a spot of brightness in what was otherwise a decades-long soul-wearying landscape for LGBT people in America. Its publication wasn’t a tide-turning event — look to 1961’s The Children’s Hour for another tale of despairing same-sex love that leads to suicide, look to Cat On a Hot Tin Roof, look to Brokeback Mountain even, a book and film heralded for showing a romance between men in any kind of sympathetic light, but which still ends tragically. Look through the past few decades and even to our own time when the LGBT community shows no surprise but only disappointment when a television show or movie decides to kill off one of its very few queer characters. Over and over, LGBT readers and viewers are told, “You are an anomaly, and we have no place for you.”

Carol shows there is a place, and it is kind and it is beautiful.