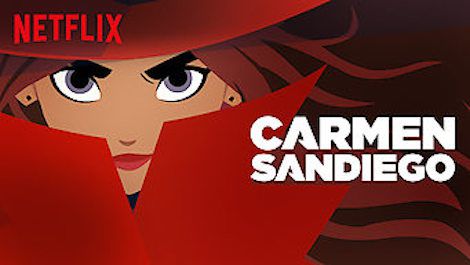 Netflix had continued its round of good cartoons. We got Carmen Sandiego this month, which promises adventure and moral ambiguity.

Based on the franchise — which includes game shows, computer games, a previous animated series and several novels — we get a flipped perspective where Carmen is a protagonist rather than an elusive antagonist. She still eludes the authorities, trolls them, and doesn’t go for the simple solution of allying with Interpol or any local authorities. Obviously Carmen enjoys the thrill of the chase, but while Interpol may not know her, V.I.L.E. certainly does.

Since we are going to discuss the first two episodes, with nine available for season one, mind the disclaimer below:

Carmen as the protagonist changes our objective as an audience. In the games, we would chase down Carmen and her crooks to catch them. She strings us along in Treasures of Knowledge for mysterious purposes.

In the pilot, Carmen robs a private apartment in Poitiers, France, and boards a train to France. Interpol agents fail to nab her despite her caution in turning off all the alarms. Then a V.I.L.E. agent called Gray corners her on the train and interrogates her, planning to take her in once they reach Paris. Carmen sits down calmly, having switched from her trademark coat to a sweatshirt, and talks with Gray about her past. She then reveals that she was hoping to convince him to join her, because they used to be best friends. Gray unfortunately isn’t playing along, and we could figure that out since his firing on an innocent man led to Carmen leaving V.I.L.E. and planning to take it down from the outside.

On the surface, we get a straightforward origins story. This Carmen is younger and more idealistic, believing stealing should not involve a moral hazard or “stealing lives” in her words. Rather than founding V.I.L.E. and sending out her underlings, V.I.L.E. found and trained her, hoping to recruit her.

Carmen in this iteration cares about moral hazard. As she tells her former friend and classmate Gray, who has cornered her on a train, she was given a charmed life as V.I.L.E. Island’s ward and adopted child “Black Sheep”. Her teachers told her they found her as an abandoned baby in Argentina, with a set of Russian nesting dolls. None of the adults could hurt her, and Coach Brunt spoiled her rotten. V.I.L.E. conveniently left out of Carmen’s childhood the fact that thieves must use lethal force and leave no witnesses. Carmen is quite shocked and embittered when she finds out as a teenager, after sneaking out to join the graduating students. She says that her whole life was a lie, learning the E in V.I.L.E. actually stood for “evil”.

The interesting fact is that no one on V.I.L.E. is truly evil, despite the name. It would have been easy for the writers to make everyone an abusive guardian towards Carmen. Instead, we get the opposite; Coach Brunt is like a doting mother to Carmen and protects her from any punishment. Dr. Saira Bellum asks why Carmen didn’t turn in a stolen phone for extra credit, while Cookie Booker with all her data forgives Carmen for numerous water balloon pranks. Shadow-san, the teacher in stealth, is the hardest on Carmen for her impulsiveness but accurately pinpoints that her rash actions will endanger her in the field.

Love and compassion ironically become opposing forces; a cruel person can love, as we see with Coach Brunt. The woman forgives Carmen for sneaking out and gives her a bone-crushing hug. Carmen knows that Coach Brunt truly loved her. That’s what made Carmen’s defection much harder and more relatable to a modern viewer. It especially is tough and ironic when Cookie gives her sincere advice on how to be a better thief, and Carmen pickpockets her hard drive. She’s the thief version of an exvangelical, or a person who leaves organized religion on seeing the injustices and extremism involved.

Ultimately, V.I.L.E. loves Carmen but wants to own her. Her teachers expect her to feel gratitude for being adopted and spoiled, but not allowed to objectively question the system that gives her privilege. They gave her the code moniker “Black Sheep” because a real name would mean she has attachments to the outside, which she doesn’t. Carmen questions the story of her being abandoned in Argentina, and what else V.I.L.E. hid from her. She also wants her freedom, to see the countries and continents she studied as a toddler and as a kid. V.I.L.E. would only let her leave if she graduated as a thief, and Shadow-san denies her that by failing her final exam.

Finding out that V.I.L.E. will resort to murder convinces Carmen to plot another escape off the island, this one permanent. She severs ties with all of V.I.L.E., steals Cookie Booker’s coat to impersonate her briefly, and adopts the name Carmen Sandiego from Cookie’s hat. When Gray says either “Black Sheep” can accept a pardon from V.I.L.E. or he’ll knock her out and take her in as a prisoner, she reminds that she is Carmen now and kicks him in the face. Once she has the name, and owns it, she won’t be a sheep that returns to the fold.

We can’t say the same for Chase Devineaux. I’m not sure why they went the route of changing him drastically from his show counterpart. Chase in the games is, for lack of a better word, cool. We know he and Carmen used to be partners because in the games she used to be an ACME agent who went rogue. In Word Detective he guides you to find the keys you need to win the game. Carmen in the games views him with respect, even as she mocks the captured agents.

Netflix Chase is French, funny, and impulsive. He prefers to pursue Carmen on her own, without calling for backup. This leads to him and his wiser protege Julia Argent missing Carmen every time.  We get some hilarious scenes of his impulsiveness backfiring, but it makes a person confused if they know the older canon. Carmen can only respect that Chase never gives up, while he falls from rooftops and regains his footing. It makes me roll my eyes because come on, man, you can do better.

Julia in contrast gets less characterization. Here we can see why; in her games, she was Carmen’s former partner at ACME and couldn’t understand why Carmen had gone rogue. In the show, she has no such history and instead uses her knowledge on history and archaeology to pinpoint Carmen’s motives. Julia can only offer advice to Chase on how to navigate the trains, and what the apartment’s valuables reveal about its owner. There’s hope that Julia can ground Chase.

I am excited. Super excited.  Carmen is still a thief, if a nobler one, and she likes trolling the people who chase her. Moral ambiguity will always win me over, as well as the troublesome ties that love can bring.

Carmen, keep stealing. You’re doing amazing. I can’t wait to see the rest of your adventures. But I will be showing more Word Detectiveso that we can see the cool Chase from earlier times.