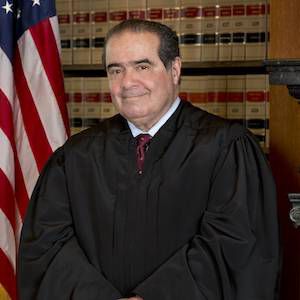 Unless extraterrestrials land on the Washington Mall and begin probing politicians live on TV, Twitter, and Twitch, the biggest American political news story this month will have been the death of Supreme Court Justice Antonin Scalia at the age of 79. A strict conservative, Justice Scalia was the longest serving Supreme Court Justice in the history of the United States of America; adored by those on the right, loathed by those on the left, the New Jersey-born father of nine was a touchstone of fascination on all points of the political spectrum. His death effectively leaves the Supreme Court tied 4-4 on pretty much all matters until his replacement is appointed, which, in the current political climate, will be a Tolkienesque battle the likes of which haven’t been seen since [REDACTED].

1) [Thunder] Alas, the storm is come again! My best way is to creep under his gaberdine; there is no other shelter hereabout: misery acquaints a man with strange bedfellows. I will here shroud till the dregs of the storm be past.

Justice Scalia was firm in his beliefs, but he delighted at times in meeting and spending leisure time with people opposed (seemingly or actually) to his stances. He hired campaign finance reformer Lawrence Lessig as a clerk, considered Justice Ruth Bader Ginsberg a personal friend (and likewise, she did he), went hunting with Obama appointee Justice Elena Kagan, and:

2) (I wouldn’t believe this if it wasn’t backed up with quotes and published journalism) Justice Scalia had a presumably very-high vocabulary lunch with postmodern author and bandana aficionado David Foster Wallace. Footnotes for dessert?

3)Reading about all these moments and relationships that make little sense considering his virulent opposition to most post-18th century changes to America, however, it was not unlike the post-election actions of another Republican: Abraham Lincoln. While most of his unofficial team of rivals did not support his side, and he theirs, it has to be stated for the record that Justice Scalia did not exist wholly in an echo chamber. Perhaps we all need a poke next time we block someone on Twitter who casually disagrees with us.

4 )Undoubtedly many lawyers, plaintiffs, defendants, and affected parties dealing with Justice Scalia felt at times like they were characters in Catch-22 (or The Handmaid’s Tale, when it came to his perennial foes, women and control over their bodies), wounded and wrapped up by words that Justice Scalia wielded like weapons in his battle to protect what he viewed as the original intent and scope of the Constitution..

“A law can be both economic folly and constitutional.”

In many cases, he was an Army of One; last year, a biography of Justice Scalia was published titled, appropriately, SCALIA: A COURT OF ONE.

5) In 2008, Justice Scalia published the book MAKING YOUR CASE: THE ART OF PERSUADING JUDGES. This is remarkable in that, when it came to his own cases, he could and often was as immovable as a boulder at the bottom of the sea. But: this book is excellent preparation not only for appearing before a court, but also gives valuable writing advice, including the following succinct sentence that some writers need to remember:

Regardless of political persuasions, I think we can all give Justice Scalia an Amen on that point.

6) Justice Scalia considered it a disgrace that more Americans haven’t read The Federalist Papers, a collection of published letters written by John Jay (first Chief Justice of the Supreme Court), James Madison (fourth President of the United States), and Alexander Hamilton (Ten-Dollar Founding Father without a father), during the Constitutional ratification process of 1787 – 1788. The Federalist Papers can be read the same way the notebooks of other authors can be read: debate, uncertainty, ideas rejected and reclaimed and polished and turned after time into final form.

Hamilton in Federalist 70 wrote about the importance of a strong Executive branch. I know that the current Congress would rather not have that debate. They may know little of loyalty, smell like new money, dress like fake royalty, but they are bound by the Constitution that Justice Scalia revered, and Federalist 70 is of great importance at this time.

7) In 2010, American politics as we know it was reborn. In the majority, Justice Scalia agreed with the plaintiff corporations and unions that “independent expenditures” constituted free speech. To wit: the First Amendment protects speech by individuals, money used for political purposes is speech, and restrictions upon money equal restrictions upon speech, and since corporations and unions are individuals, which as the First Amendment clearly states-

To explain the asininity of this ruling and its impact upon America, I suggest reading Zephyr Teachout’s CORRUPTION IN AMERICA: FROM BENJAMIN FRANKLIN’S SNUFFBOX TO CITIZENS UNITED. Considering the Democratic Party just ended then-candidate Barack Obama’s ban on contributions from federal lobbyists, this is a very, very timely read.

8) A devout Catholic, Justice Scalia was one of the Supreme Court’s most virulent opponents to marriage equality for same-sex couples. Instead of repeating his biases, accusations, fears, and hatred yet again, it would be better to remember the intense, years-long legal battle for equality. Many books have been written on the fight, but a recent and excellent text is THEN COMES MARRIAGE: UNITED STATES V WINDSOR AND THE DEFEAT OF DOMA, written by Attorney Roberta Kaplan who won the Defense Of Marriage Act-killing case of USA v Windsor, with a foreword by the plaintiff Edie Windsor. 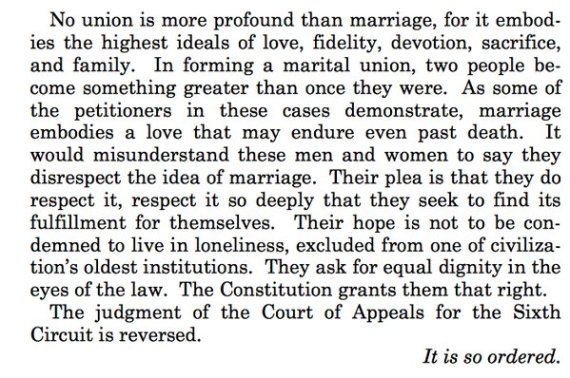 An honorable mention: The Bhagavad Gita

There will be a fierce election year battle to replace Justice Scalia, with Senate Republicans determined to stall the process until the news President of the United States is inaugurated (in violation of the precedent set by Ronald Reagan’s nominee Justice Kennedy’s appointment to the Supreme Court in 1988, which was as much a Presidential election year as 2016), and President Barack Obama determined to fulfill his duty to have nine Justices of the Supreme Court.

On the short list that has been floating around for a few years is Judge Sri Srinivasan, a Judge on the D.C. Court of Appeals. In much the same way Representative Keith Ellison’s swearing-in on (President Thomas Jefferson’s personal copy of) The Qu’ran created a stir in 2010, expect a kerfuffle to occur if Judge Srinivasan is chosen, as he swears his oaths upon a copy of the Hindu holy text The Bhagavad Gita.