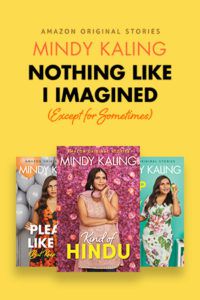 From New York Times bestselling author Mindy Kaling comes Nothing Like I Imagined, a new collection of six hilarious and personal essays. Mindy gives the inside scoop on her new role as a single mom, the perks of being her own husband, and how she deals with social anxiety even at the most glamorous A-list parties. In between, the beloved actor, writer, producer and Hollywood power-bruncher gets Kanye West’d at her best friend’s birthday, thwarts an “only in LA” crime, and learns what it means to have it all. Prime members read or listen for free.

at Bitch Media: 9 YA Books Feminists Should Read in November

at Bustle: 10 Books Like The Queen’s Gambit That Prove Chess Is Far From Boring

at BuzzFeed: 5 Comfort Books We Love And 5 Books We’re Highly Anticipating This November

at Crime Reads: 6 Books Featuring Dark Anti-Heroines Who Test the Limits of Morality

at Electric Lit: Our Favorite Essays and Stories About Comforting Things

at Epic Reads: 41 Books to Help You Escape the Madness of the Election For a Bit

at POPSUGAR: Every Captivating Thriller and Mystery You’ll Want to Read in November

at Riveted Lit: Books to Read If You Need an Escape

at Shondaland: The 5 Best Books for November 2020