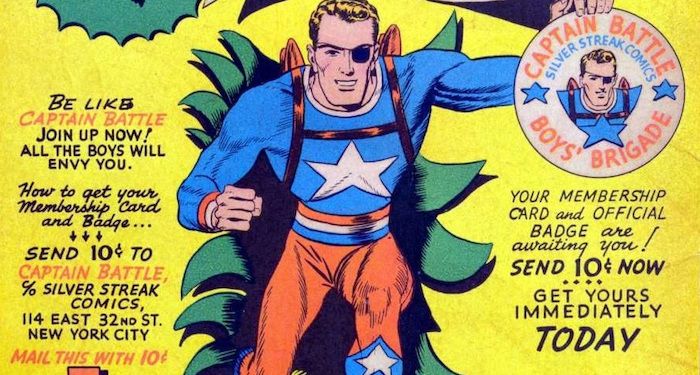 Patriotic superheroes were ridiculously popular during World War II. Captain America may be the best-known example, but he had to fight his way through a very broad field to become the icon he is today. One competitor who couldn’t quite hack it was Captain Battle.

I learned about Captain Battle when researching this article about patriot-heroes. Immediately, I knew I had to give the guy an article of his own. To say that his adventures are off the rails would be an understatement, as I don’t believe they ever made it onto the rails in the first place.

Captain Battle debuted in 1941 in Silver Streak Comics #10, published by Lev Gleason Publications. He was co-created by Jack Binder and Carl Fromes. I could find very little information on Fromes, but Binder is apparently the guy who coined the phrase “zero gravity,” so that’s neat. You’d think that would make him the star of the family, but his younger brother Otto co-created Supergirl for DC. Otto took over writing duties from Fromes in later issues of Silver Streak Comics.

Unlike today’s superheroes, who are perhaps overly obsessed with origin stories, ’30s and ’40s heroes tended to jump right in with both feet. You can see that with Superman’s origin, and you can see it with Captain Battle, who crams his entire life story into a single paragraph in the first panel.

What is that story, you ask? Battle lost an eye as the youngest American combatant in World War I. In 1941, he is an accomplished inventor with a litany of frankly horrifying patents to his name. That includes a “curvoscope,” which he can use to spy on anyone anywhere in the world. He uses it now to see that the fleet of an unnamed nation (it’s probably England, since he describes the nation as “our cousin”) is under attack by a supervillain named Black Dragon.

I am in insta-love with Battle’s secretary, Jane Lorrain. These are her first two panels and she is already fed up with his nonsense.

Captain Battle’s first few adventures pit him against the Black Dragon’s giant man-bird mutant lackeys, called Deaglos. I cannot even begin to guess at the pronunciation of that. Even worse is their appearance, which is…um…

It’s the “your cluckness” that gets me.

Captain Battle fights the Deaglos (and future baddies) with Dissolvo, another one of his inventions. It has the power to melt his opponents like jelly. Um, wow???

The good news is that he uses this weapon very sparingly. The bad news is that he has a gun that turns people into custard. Why would you even think of something like that? And if you did think of it, why in the name of Alfred Bird would you build it?!

It isn’t long before Battle finds a way to revert the Deaglos to their normal human state. One of them is a young boy named Nathan Hale. (It’s patriotic, get it?!) Battle immediately sets about tracking down the boy’s parents to take him home. Ha, ha, I kid. He rechristens the child Hale Battle and makes him his “boy pal.” That does not seem legal.

I’m sure this had nothing to do with the fact that Captain America, a less upsetting character, already had a plucky kid sidekick. If nothing else, it does tell us that “Battle” is his real name, not a nom de guerre. Now I wonder if “Captain” is a title or if his parents really named him that.

This is so sad it’s hilarious. They want him to be Steve Rogers so bad. They even gave him a skull-themed villain: Herr Skull and his band of skull-masked saboteurs.

I literally just now realized the points on their heads are probably meant to evoke the World War I pickelhaube helmets and not, as I originally assumed, to demonstrate their love of unicorns.

Many of Captain Battle’s foes embraced a supernatural theme, pretending to be zombies or mummies or suchlike as a front for their sabotage activities. Only rarely is actual magic involved. It’s like if Scooby-Doo and the gang spent their careers hunting generic, unmemorable Nazis.

Issue 1: Has a very different tone from previous comics. Features Battle roaming the world solo to protect other countries from Nazi and Japanese aggression. Jack and Otto Binder are not involved in the production and the art is trash.

Issue 2: The Binders return, and so does Battle’s sidekick, Hale. We get a multi-part story about a supposed Middle Eastern princess who looks exactly like Jane Lorrain and her super expensive diamond.

Issue 3: This one was not published by Lev Gleason Publications like every other Captain Battle story. Instead, over a year after Issue 2, Chesler swoops in and gives us Issue Three, which is just a recolored reprint of Silver Streak Comics #20. Hale is renamed Kane for some reason.

Issue 4: Does not seem to exist.

Issue 5: Last issue. (I hope???) Is a reprint of Captain Battle Comics #1. I found a couple of websites attributing this issue to Picture Scoop, Inc. However, the company address on the first page of the issue is the same as the address on the Lev Gleason comics, so I’m pretty sure it’s them again.

Confused yet? I sure am! In any case, it’s obvious that no one was falling over themselves to make Captain Battle a success, despite their halfhearted attempts to turn him into Captain America.

There was also a spinoff of sorts, Captain Battle Jr., about the adventures of Battle’s ace pilot son. They don’t get into detail about who the kid’s mother is, the circumstances of his birth, or why Battle Sr. has never bothered to mention him. But his existence sure does shine a new light on this exchange with Hale, where Battle tells him “there’s no other boy on Earth I’d rather have along than you!“

Silver Streak Comics was effectively cancelled after Issue 21, leaving Captain Battle permanently hanging in the middle of a multi-part story. I doubt this move was targeted specifically at Captain Battle; it seems like Lev Gleason had gone off superheroes a bit. Silver Streak Comics was renamed Crime Does Not Pay and turned into the first-ever crime comic. (Crime comics focused on “real-life” criminals rather than fictional crime-fighters.) Captain Battle Jr. is a war comic. Notably, during Battle Sr.’s brief appearance in Captain Battle Jr. #1, he does not wear his costume. (His eye patch is also on the wrong eye, but that’s a different problem.)

Not exactly a glorious end to his career. And this was the end: by the time Captain Battle Jr. debuted, Silver Streak Comics was defunct and Captain Battle Comics may as well have been. The last we saw of the original Captain Battle, Junior managed to rescue his dad from a Nazi prison in Berlin.

Captain Battle has been largely forgotten since then, with two exceptions. In 2009, he appeared in Image Comics’ Next Issue Project, which revives public domain characters in one-shot stories. In 2012, Battle made his film debut in the no-budget shlockbuster Captain Battle: Legacy War. That’s about all he deserves, as far as I’m concerned. However, if Captain Battle seems like your kind of superhero, efforts are currently underway to restore Lev Gleason Publications’ catalog, especially the superheroes. So perhaps the Battle is not quite over yet…