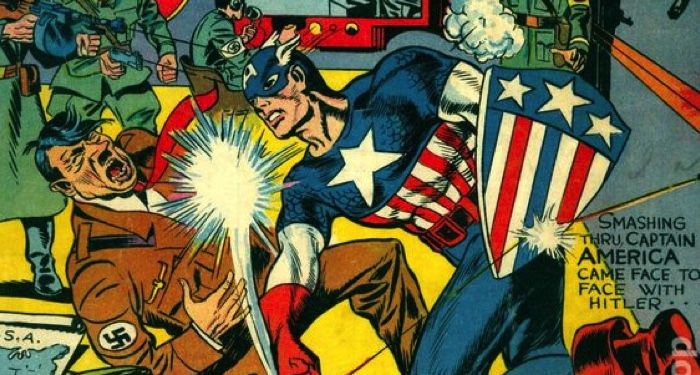 Superheroes have been around a long time, and most of the characters and genre conventions are pretty well established. But did every character always look and act the way we expect them to today? In this series, I’ll be looking at the first appearances of iconic superheroes to see what’s familiar, what’s fallen by the wayside, and what’s goofy as heck. Today: Captain America!

Captain America debuted in Captain America Comics #1 (March 1941), making this year his 80th anniversary. He was created by Joe Simon and Jack Kirby, and quickly became Timely Comics’s (which would eventually become Marvel) most popular character during World War II, for fairly obvious reasons. And though, like so many Americans, I’ve been feeling some kind of way about my country lately, it is just after July 4th (Cap’s canonical birthday), so let’s take a look at the first appearance of this most patriotic of heroes.

Now that’s a cover! Much ink has been spilled, some of it by me, about what a bold statement this cover was. Captain America Comics #1 hit stands in December 1940, a full year before Pearl Harbor (I know it says March 1941 up there; comics used to be cover dated a few months out to keep them looking fresh longer). Many Americans were still isolationist at the time, and others actively supported the Axis — and honestly, can you picture a major comic book company publishing a comic with a superhero punching a head of state today? Because I can’t! Showing Cap socking ol’ Adolf in the jaw got Simon and Kirby hate mail and death threats and the Timely offices required police protection for a while, but these two Jewish boys had a point to make and they weren’t afraid to make it.

Design-wise, the costume is still basically the same, although nowadays Steve has brown tactical pouches at his waist to add some verisimilitude to, you know, the striped girdle and little wings on his head. You’ll notice that he doesn’t have his iconic round shield yet; that would come with issue #2, after MLJ Comics (the predecessor to Archie Comics) complained that Cap was a ripoff of their patriotic superhero, the Shield.

It’s clear that Marvel was all in on Cap from the start; not only is the book named after him, he stars in four comics stories and one prose tale in this issue. So let’s see how he does!

The first story, “Case No. 1,” explains that as “the ruthless war-mongers of Europe” start looking west toward the U.S., American youth are enlisting in droves to defend their country — which is good, because we were apparently riddled with Nazi spies and saboteurs. Luckily, FDR and the head of the FBI, the hilariously named “J. Arthur Grover,” have a plan. Grover takes a couple of military officers to a curio shop in a seedy neighborhood, and then to a hidden lab inside it, where a scrawny young man is injected with a serum that miraculously turns him into a strapping, bare-chested he-man.

Suddenly, however, one of the awestruck onlookers reveals himself to be a Nazi spy, and shoots the scientist who created the serum. The newly christened Captain America punches him a few times until the saboteur accidentally electrocutes himself, but the serum is destroyed, ending the hope of a super soldier program. (The phrase “super soldier” does not appear anywhere in this comic.)

Honestly, what’s most remarkable about this scene is how closely 2011’s Captain America: The First Avenger follows it. The curio shop, the old lady who lets them in, the viewing booth and the sudden attack…The main differences are: 1) the seemingly American doctor is called “Professor Reinstein,” though he would in later issues become the more familiar German Jewish Dr. Erskine (Reinstein being revealed to be an alias to hide him from the Nazis); 2) the requisite beautiful girl is only referred to as “Agent X-13,” though in the ’60s she would be retconned into Peggy Carter; and 3) this Steve Rogers doesn’t have nipples.

It’s only on the story’s last page that we learn the real name of Captain America: Private Steve Rogers. We also meet “the regiment’s mascot,” Bucky Barnes, because I guess they not only let a random kid hang around the army base, they gave him his own tiny uniform? Bucky stumbles upon Steve’s secret, so Steve decides the only solution is to let this actual child help him fight Nazis. Steve, no.

Finally, we learn how to send Marvel ten cents and become an official agent tasked with rooting out Nazis spies in our midst! I bet that made a lot of kids real annoying in 1941. Hey, do you think Marvel would still honor this if I sent them a dime?

“Case No. 2” is…okay, so the problem with comics about soldiers who aren’t actually at war is that they’re kind of just hanging around a lot of the time? Which is why this story is about Steve and Bucky going to see a supposed fortune teller who keeps predicting accidents on military bases:

Our heroes suspect that the “fortune tellers” are actually behind the accidents, and they’re right — or at least half right, because Omar is a pawn. They are quickly captured, along with secret agent Betty Ross, Cap’s first love interest (later renamed “Betsy” and not to be confused with the Hulk’s love interest Betty), who from what I can tell shows up randomly in the story at this point because Jack Kirby felt he’d gone long enough without drawing a pretty girl:

The villains are knocked out and Cap gives Betty a gun and tells her to cover them until the FBI arrives, which is very Golden Age — every love interest was also a hardboiled dame with a revolver in her purse, and I love that for them. And off our mystery men go! Bye, Bett(s)y!

“Case No. 3” has amazing visuals, though tragically the dapper top-hatted chess-playing skeleton does not actually appear in the story. Also, I’m not sure anyone at Timely knew how chess works.

The story begins with an admiral being murdered and our heroes searching for the culprit.

Apparently, Bucky is young enough that Steve needs to hold his hand in a crowd, but old enough to…chase a murderer on his own??? STEVEN GRANT ROGERS, WHAT IS WRONG WITH YOU? Sure enough, Bucky is almost killed until Steve rescues him, but the killer gets away.

Soon after, a general is slain, and little Bucky is lured into a trap. This is pretty easy to do, because his codename is just…his name. I’m so mad at Steve right now, I can’t even tell you.

Luckily, Bucky had the foresight to leave a note for Cap, who promptly rescues him. The spies are arrested, and there’s never any explanation of what the chessboard had to do with any of it. But that opening page looked awesome, so who cares?

And speaking of striking opening pages…

Our final story, “Case No. 4,” introduces the Red Skull, who can apparently kill by forcing you to gaze into his eyes. Bucky is extra impossibly tiny in this story, with a jaunty little cape, which may be why Steve finally realizes that bringing a child with him to fight Nazi spies is, you know, bad:

An indignant Bucky goes looking for the Red Skull on his own, is captured, and is rescued by Cap. This is only the first issue and this has happened 73 times already. No wonder the Winter Soldier has issues.

The next day, a Mister Maxon of the Maxon Aircraft Company shows up at the base to demonstrate his new plane, but when it crashes due to sabotage, he doesn’t seem all that upset, making Steve suspicious. That night, another general is murdered by the Red Skull, and we meet the issue’s greatest character, his wife:

This lady’s so mad she drops the gun to kill the Red Skull with her bare hands. She’s my hero.

Damn, Steve. That’s cold. But he was a Nazi, so fair enough, I guess.

(If you’re wondering how the Red Skull could be Captain America’s most famous enemy if he dies in the first issue, the answer is that the Red Skull we’re familiar with appears in issue #7, revealing that this chump was just one of his pawns.)

And that’s it for Captain America in Captain America #1! The rest of the issue gives us stories about 1) Hurricane, “son of Thor, god of thunder, and the last descendent of the ancient Greek immortals,” who “returns to Earth to fight his ancestral enemy, Pluto, the devil,” a mishmash of mythologies that gave me a severe headache; and 2) TUK CAVEBOY. You can see why these guys didn’t get movies.

So is this the Captain America we know today? I would say yes, if we’re looking specifically at World War II–era Cap. All the key elements are there in this first issue, with the exception of, you know, the U.S. actually being at war. But we’ve got Bucky, Betsy Ross, the Red Skull, and that familiar two-fisted do-gooderism. We’ve also got that mentality of “I’m not out to kill anyone, but if he dies he dies,” which was a hallmark of the pre–Comics Code Authority era and which Steve would eventually return to, assisted by the movies and their early focus on war.

Of course, there are other key aspects of Steve’s personality that aren’t present here: namely, the sense of being a man out of time, and his conflicted relationship with his country. But those of necessity wouldn’t emerge until after he was defrosted in 1964, so we can hardly expect to see them in 1941. Also, nowadays Bucky is rarely depicted as quite so young even early in his career, largely thanks to the movies but also because STEVEN GRANT ROGERS WHAT THE HELL WERE YOU THINKING?! Stucky fans, feel free to disregard this issue and continue to do your thing, even if tiny, sassy, be-caped Bucky is the second best character in this comic after that one general’s wife.

In conclusion, happy birthday, Cap, and congratulations on making it to eighty years! That one random Nazi was right: that Yank is loaded with dynamite!