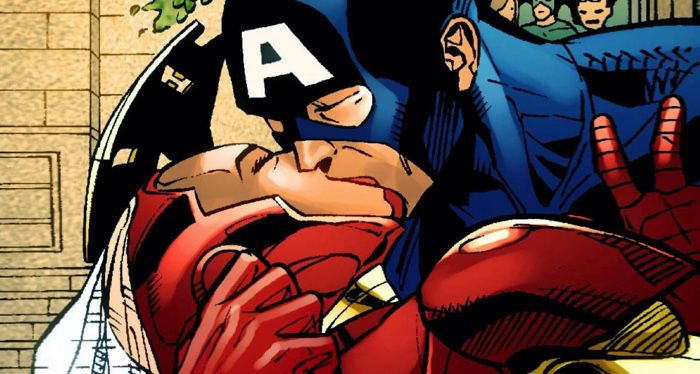 Captain America and Iron Man’s relationship can best be described as unpredictable. After decades of cultivating a close friendship, they started hitting bigger and bigger potholes. In the ’80s, Iron Man’s alcoholism drove a wedge between them. In the ’90s, their differing approaches to Operation Galactic Storm caused another rift. But they always managed to patch things up and go back to kicking butt together. That’s what friends do, and that’s what Steve Rogers and Tony Stark are, despite everything.

Then came the Civil War, which ended in the (temporary) death of Captain America. This seems to have set a bad precedent: now it seems like Cap and Iron Man can’t go more than a few years without getting into some earth-shattering conflict. Surely there is a better way to deal with differing opinions? Mr. Fantastic thought so, too.

In Dark Reign: Fantastic Four, Reed Richards, feeling guilty over recent events (for good reason, it must be said), builds a machine that allows him to peer into other universes. This, he hopes, will illuminate what went wrong in his own universe and allow him to fix things. And in one universe — designated Earth-3490 — he finds this.

In this universe, Civil War was averted because Cap and Iron Woman — bafflingly named Natasha Stark — were too busy being married to go around whaling on each other in public.

As a shipper myself, I can’t begin to tell you the impact this single panel had on the fandom. Everyone was delighted to see this pseudo-confirmation of the ship (designated either Stony or Superhusbands, whichever you prefer). On the other hand, it was frustrating that Marvel wouldn’t let their two flagship characters get together — not even for one panel in an alternate universe — unless they could do so heterosexually.

The rest of Dark Reign: Fantastic Four has nothing to do with this universe or even with Steve and Tony. Like I said, it’s really about Reed Richards going on a virtual tour of the multiverse (while his children face Norman Osborn alone and the rest of the Fantastic Four is shunted between alternate universes, but anyway). This panel was never supposed to go anywhere, and it hasn’t, really…with one exception.

In one of the stories printed in Secret Wars: Secret Love, we visit an interdimensional charity auction. (Squirrel Girl wins a date with Thor. It’s adorable.) The crowd scenes are a shipper’s dream, including cameos from fan-favorite pairings like Captain Marvel/Spider-Woman, Magneto/Xavier, Hawkeye/coffee, and our old pals from Earth-3490, Steve Rogers and Natasha Stark.

So, as of 2015, Cap and Iron Woman were still out there, living their best lives and not killing each other.

Earth-3490 helped convince Reed Richards that he should work unilaterally to “improve” the world rather than relying on inferiors like Iron Man, et. al. It has convinced me of something completely different. Clearly, the only way to end the constant cycle of “Iron Man vs. Captain America” events is to marry them off. Tony can even wear that stupid veil if he wants. I’m not picky.