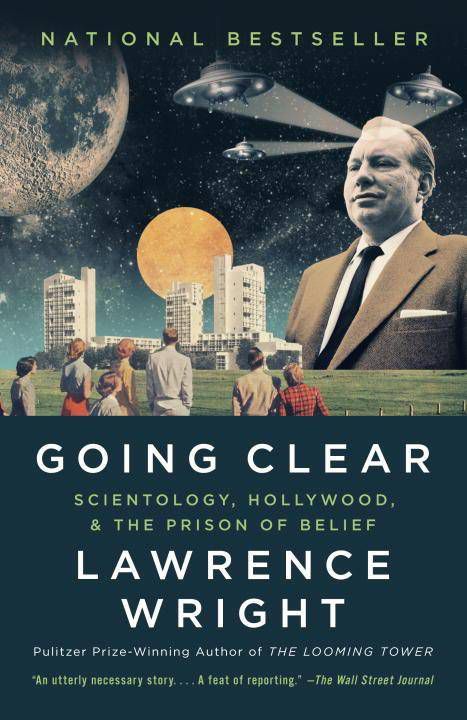 At the tail end of last year, I read Going Clear: Scientology, Hollywood, and the Prison of Belief by Lawrence Wright and it was a SLOG. An impeccably-written, page-turning slog, but a slog never the less because the central character, L. Ron Hubbard, is one of the most selfish and destructive people I’ve ever spent page-time with. Taking hundreds of thousands of dollars from his followers and forcing them to sign “billion-year contracts,” leading his hangers-on in a round-the-world treasure hunt where he’d apparently “buried treasure” in his past lives, being a really shitty husband and dad, the insanity and assholishness was unrelenting.  Bottom line, it was really hard for me to spend time with this man.

What made it that much harder was knowing all too well that he was a real person and, trusting that Wright got all his facts straight (and I do believe this Pulitzer Prize-winning writer got his facts straight) this all really happened. This would all be a lot to take if it was fiction. The Master was a bitch of a film for me to get through. But knowing all this really happened, that one man destroyed so many lives for seemingly such petty reasons, it’s almost unbearable for me. I’ve come to a reading realization. I can’t deal with sociopaths or psychopaths (or probably any kind of path) in non-fiction. I mean I technically CAN, it’s just really, really, really hard for me, so I have to choose these reads very, very, very carefully.

On the fiction side, I’ve got a little bit of a thicker skin when it comes to morally questionable (or just plain morally terrible) characters. Case in point, this past summer’s scandal-read Tampa by Alissa Nutting, which follows beautiful middle school educator/pedophile Celeste Price and her carefully plotted seduction of one of her male junior high school students. Celeste is a monster, to be sure, but she is a monster that, through the prism of fiction, I could look at and feel, well not SAFE, but certainly SAFER than I would have felt had this book been narrative fiction, or GASP SHRIEK A MEMOIR!!

I hope I’m not coming across as too much of a corseted 19th century lady in desperate need of a reclining sofa and smelling salts. I want to read about complex people in complex situations- that’s one of my favorite things about reading! But I have very thin skin when it comes to consuming media. I gasp while watching movies. I get so angry at certain television characters I’ll wake up the next morning still upset about an injustice that happened on an episode the previous night (Good Wife, you are my favorite show and at the same time, you haunt my nights). I have returned more than one tearstained book to the library…and by more than one, I mean, like, maybe 8. Media affects me deeply. And when I read about a human that is unthinkably cruel to other humans, and I know that all those humans existed, that these events happened, it’s just a lot for me. Sometimes it’s almost too much, and sometimes it actually is too much.

How do you guys feel about sociopaths/psychopaths/whateverpaths in your reading lives? Does it make a difference whether these people are fictional or real? Are you cool no matter what or can you just not deal no matter what or are you somewhere in between?