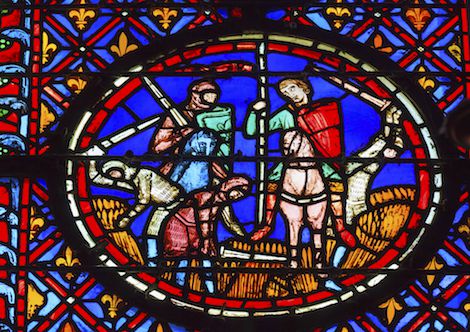 But can you understand it?

The below lines come from a poem composed in the 1380s in “Middle English.” This is English after the Norman Conquest of 1066 but before Shakespeare. English with a big enough injection of French vocabulary and Scandinavian grammar to look very familiar but still old German enough to make you think twice.

It’s also a poem that also reveals plenty about the history of English. The transformation is both dramatic and sneaky. It tells us all about the limits and freedoms offered by the world’s Lingua Franca.

But first, let’s prep you for your test.

Spelling wasn’t properly codified in the middle ages, so try playing around with similar sounds in your head (only once Caxton’s printing press arrives in 1476 do we start getting any uniformity in spelling).

Word order is more flexible (so the writer isn’t beholden to the “subject/verb/objec” rule.)

Some verb endings are different (put is putte, has is hath).

There are, finally, a few words you just won’t recognise, though some serious lateral thinking may help you. For example, “witen” for “to know” has fallen out of the language, though we still have “unwitting”—as in “unwitting fool”—for “unknowing.” (German speakers will, moreover, recognise a close relative of “wissen”.)

Now get your mind in the gutter and start translating!

And at the window out she putte hir hole,

And Absolon, him fil not bet ne wers,

But with his mouth he kiste hir naked ers

Ful savourly, er he was war of this.

He felte a thing al rough and long y-herd,

And at the window out she put her hole

And Absolon, it happened to him neither better nor worse,

But with his mouth he kissed her naked arse

With great relish, before he was aware of this.

Backwards he jumped, and thought it was amiss,

For well he knew that woman has no beard;

He felt a thing all rough and long haired,

Yes, a man has been duped into kissing a woman’s bottom and yes, the “rough and long haired” thing he feels is her vulva. What is this smut?

Only one of the greatest works of English literature. The above lines are taken from the rollicksome “Miller’s Tale” in Geoffrey Chaucer’s classic prose-poem, The Canterbury Tales. If you haven’t read the father of English letters, aka “the poet of the dawn [of English],” Sir Geoffrey Chaucer, then you really should. Other than classic themes, wit, and wonderful characters, there’s more filth in his fourteenth century oeuvre than on the underside of an old house rug.

What does all this tell us about the English, other than that it’s always been good for telling a dirty joke?

A lot. In fact, an important linguistic transformation is occurring in front of our very eyes.

The Transformation of English

Let’s take the sentence “[H]im fil not bet ne wers,” literally “him befell not better nor worse.” This sounds wrong in modern English. Why?

“Him” is the object of the sentence but it comes at the front, where we would expect the subject to go. Nowadays we would have to say “it befell him neither better nor worse.”

So how does Chaucer get away with it?

It has to do with English’s shift from a synthetic language, or one that packed a lot of information into a single word, to an analytic one, which relies on the logic of word order to convey meaning.

In synthetic languages, words change their form depending on their function in a sentence, otherwise known as “inflection.” It makes sense if you think of the meaning of “synthesis,” the combination of different elements to create a new whole.

A modern example of inflection is the change from “he” (subject) to “him” (object) or the adding of an s to form a plural. Old English (c 500 to 1066), Middle English’s predecessor, was a very synthetic language, so even nouns changed their form depending on their role in a sentence.

Nowadays this noun-change only happens with plurals (dog, dogs). But in Old English nouns (and their articles) took a dizzying array of endings. Imagine that instead of saying “The man gave the dog a bone” you had to say “The man gave tham dogen aun bonee” (*all endings made up).

A benefit of synthetic languages is that, although you need to remember a lot of rules for what to add to words to change their form and function, you enjoy greater freedom the order in which you construct your sentences. Information about gender, plural, who is doing what, etc., is packed into a single word, so you can put that word wherever you want.

Over time, however, English has become “rather analytic,” using separate words (like all our prepositions!) and word order to convey meaning. “The dog gave the man a bone” is different than “the man gave the dog a bone.”

But Chaucer could play around more with sentence structure and it was still clear who was doing what to whom (incidentally, “whom” is an inflected form of who, which is perhaps why we don’t much use it anymore…)

So you see “ers”-kissing really is edifying.