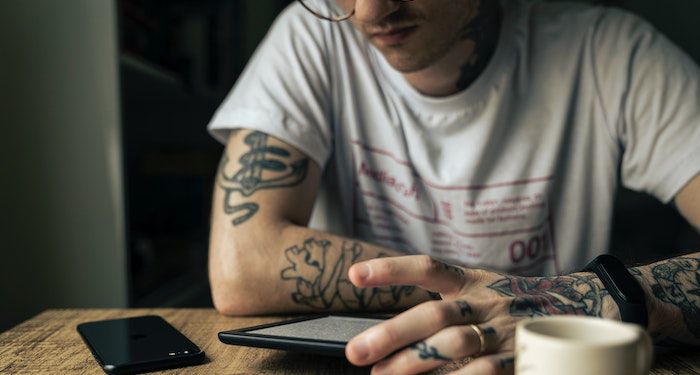 If you’re an avid manga reader, you may have noticed that there’s a wide variety of manga titles available on Kindle Unlimited—including Attack on Titan, Battle Angel Alita, and Fairy Tail, among other series—but what does that mean for you? Can you read manga on a Kindle or is it just going to be a hassle? Fear not, manga fans, because downloading and reading your favorite Japanese comics on an ereader has never been easier to manage!

Book nerds know the struggle of finding the perfect bag to hold their essentials—and yes, that definitely includes your current reading shortlist—but manga readers have it especially tough. Those little volumes may be small, but they’re also quick to read—so quick, in fact, that you may need three or four to get you through the wait time at your next doctor’s appointment! That may be less of a problem in Japan, where manga is so cheap that volumes can even be considered disposable, but western fans probably don’t want to discard their brand-new $10 books at the drop of a hat. That means you need to be able to transport multiple series installments everywhere you go—no easy feat when you have limited bag space.

Enter the Kindle. If there’s one way that ebooks and ereaders have fundamentally changed book nerds’ lives, it’s by allowing us each to carry a virtual library wherever we go. Although it was originally designed with traditional texts in mind, the Kindle has turned out to be a great way to transport your manga collection for reading on the go.

Reading manga on a Kindle device used to be a real pain in the rear, with ereader owners forced to download separate apps in order to enjoy .CBZ files—or just make their e-ink model Kindle display manga pages properly. Thanks to a few innovations in programming and manufacturing, however, reading manga on a Kindle is easier now than ever!

Keep scrolling to find out how you can read manga on your Kindle, hassle free, and read on for some great suggestions on where to download your new favorite manga.

Can You Read Manga on a Kindle? Here’s How To Get Your Manga Fix

The truth is that the majority of manga series available on the Kindle store are compatible with most Kindle models. This means that determining which Kindle model is right for you will come down to two basic elements: the style of manga you like to read, and where you get your digital manga volumes.

If you’re looking to read old-school, black-and-white manga on your Kindle, you can’t go wrong with a Kindle Paperwhite or Oasis. Since 2018, these e-ink readers have come to U.S. book lovers with a specially integrated technology made just for reading manga. A few years after the Kindle Paperwhite Manga Edition landed in Japan, those same manga-friendly improvements became standard on all Paperwhites—from Generation 6 onward—Voyagers, and Oases sold in the U.S.

You Can Read Colorized Manga on a Kindle Fire Tablet

If you like reading colorized manga, you’ll probably want to lean toward a Kindle Fire. Reading full-color comics and graphic novels on a Fire tablet is both aesthetically pleasing and buttery smooth. Unlike the e-ink model Kindles, the Fire can read manga you’ve downloaded in .PDF format—say from Humble Bundle or another outfit—giving you hi-res pages that you can manipulate to enjoy every last detail.

We’ve already discussed two places you can buy digital manga volumes—Humble Bundle and the Kindle store—but those aren’t the only shopping options—shoptions?—out there for manga fans with ereaders. Here are two more fantastic, Kindle-friendly apps you can use to download manga on your ereader today.

Although comiXology is technically an Amazon company—and therefore has a lot of overlap between its collection and the Kindle store’s—it’s still worth mentioning for one reason: comiXology Unlimited (CU). For $5.99 per month, readers can access more than 25,000 comics, graphic novels, and manga series. You can also purchase individual volumes that aren’t part of the CU library from comiXology’s full collection, which has upwards of 100,000 items ready to read. What’s more, if you’re also a fan of western comics, comiXology allows you to sync up with your DC Comics and Marvel accounts, so you can read your entire library of digital comics from one convenient location.

Compatible with Kindle Fire devices, Hoopla is a digital-lending service you may be able to access through your local library. This handy app lets you check out music albums, ebooks, eaudiobooks, and digital graphic novels—including both western comics and manga series—with your library card information.

Unfortunately, Hoopla is not compatible with e-ink Kindle devices, so many apologies to Paperwhite and Oasis owners, but you’re out of luck here. For readers with a Kindle Fire and a library card, though, Hoopla is hard to beat. Check to see if your library card comes with Hoopla access, and use the app to download the next installment of your favorite manga series.

There you have it, folks—You can read manga on a Kindle, and you no longer have to jump through hoops to do so! If you already have a Kindle on-hand, then you should be able to find manga volumes in the Kindle store to download and enjoy today. If you’re working with a really old Kindle, however, or you’re still shopping around for your first ereader, there’s no need to worry. There are plenty of apps you can use to download manga on your Android or iOS device! And if you prefer South Korean comics, be sure to check out these great places to read manhwa online.