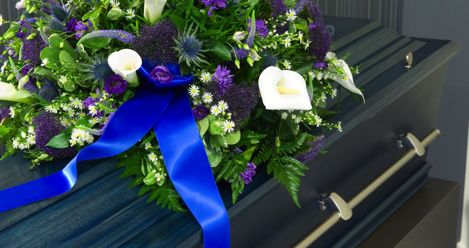 I was one of those kids who obsessed about dying. If my parents were one second late to pick me up from school, I knew—just knew!—that they were crushed in a tangle of metal and rubber on the side of the freeway. I’d start bawling, leaving my younger sister to console me with “they’re not dead, they’re just late.” And I can’t even count how many times my mother had to wake up to the sound of me sniffling late at night because I was scared I was going to die the next day. Not for any specific reason. I was just filled with doom and dread. I would never have imagined that one day I would let a book by Caitlin Doughty convince me to pick out my own casket. 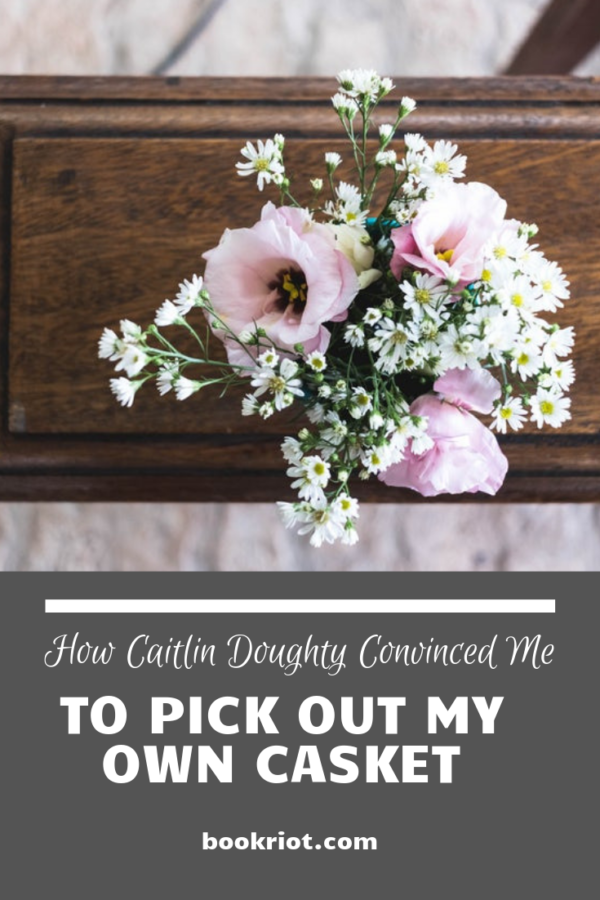 Even as this trembly, fearful kid, I devoured the stories with tragic endings in Chicken Soup for the Grieving Soul. I was both traumatized and fascinated with the whole idea of dying. I haven’t changed much, I guess, because even though I’m still terrified of dying—mostly because I don’t want to leave my son behind—I recently read Caitlin Doughty’s 2014 book, Smoke Gets in Your Eyes & Other Lessons from the Crematory.

Doughty treats death with grit and a touch of humor. In one memorable scene, she meets a corpse that’s been hanging around for a while and therefore looks otherworldly: “Grotesque as (the corpse) appeared in my amateur’s eyes,” Doughty writes, “I couldn’t shrink away from her body like a wobbly fawn. [The manager] had made it clear that I was not being paid to be freaked out by dead bodies” (12).

Unlike Doughty, I am most definitely the wobbly fawn type. I started college on a pre-health profession track, where I became known as the only one in my whole anatomy lab who learned from plastic body parts instead of cadavers. The teaching assistant tried to coax me into the cadaver room—“Come on, it’s not as bad as it seems. You get used to the smell.” I stood, clutching my lab coat tight around my body. I was already shaking, the absolute wobbliest of fawns. I peeked through the glass window at the flayed former people and—

“Nope. I’m not going in there.” I dragged myself into the hallway, slumped against the wall, and breathed my way out of a panic attack. I could not separate the cadavers from the people they had once been; I looked in that window and saw a person with a life story, not a useful tool for science. That afternoon, I switched my major to English, with the intention of becoming a writer. Obviously I had way too much imagination for medical pursuits.

That’s why I so admire Doughty. Though we have similar fearful backgrounds, she overcame her fear and has used it to champion positive conversations about death. It’s something we need. According to anthropologist Anita Hannig, “In the United States the end of life has become so medicalized that death is often viewed as a failure, rather than as an expected stage of life.” Hannig argues that we turn our backs on conversations about death because we fear it so much. But, like Doughty, she believes we need to talk about it openly because facing death will enable us to handle future grief in healthier ways.

Neither Doughty nor Hannig speak much about sudden death, though. Or debilitating illnesses that take the lives of young and old. Those are what I fear the most. But I can appreciate Doughty’s sage conclusion: “Unable to choose how I would die physically, I could only choose how I would die mentally. Whether my mortality caught me at twenty-eight or ninety-three, I made the choice to die content, slipped into the nothingness, my atoms becoming the very fog that cloaked the trees” (241). What a peaceful way to think of it.

Upon finishing the book, I researched Caitlin Doughty a bit more. She now owns and operates a funeral home in Los Angeles. Featured on the website are jarringly tranquil photos of shrouded bodies lying in the earth. Intrigued, I clicked the link to “Shrouds, Caskets, and Urns”. By now I had a pretty good idea of what I want to happen to my body when I die. (I do not want to be embalmed. If you read the embalming scene in Doughty’s book, I doubt you will either.)

Within minutes I found the perfect vessel to carry me to the other side: A simple willow casket adorned with wildflowers. Then, bury me in a natural cemetery where I’m not sealed into a metal vault. Let me return to the earth, dust to dust, with few things between the soil and me. Let me nourish other forms of life.

It feels weird to have written my end-of-life wishes above, but it’s a step in a more death-accepting direction for me. Still, the thought of ever having to choose after-death arrangements for a loved one will always grip me with terror. So I’ll stick with thinking about my own body, and I challenge you to think about yours, too. Pick out your own casket or urn; find a place where you’d like to be buried or cremated, and how. What rituals do you want? What care should be taken with your body? It’ll feel bizarre, but it might just loosen the fearfulness inside you.