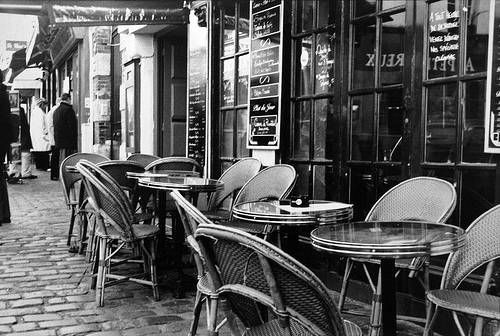 Tipping my drink to our Riot Read for The Great Gatsby, it’s time for a Fitzgerald-friendly Dinner Table in the Sky game—snatch up your hat and notebook and let’s skip to a Parisian café with saucer-eyed American expat writers!

A dinner table feels too formal, so instead of a seating plan, the scene I’m imagining is a yellow-lit Left Bank café, anytime between twilight and 2 a.m. A place with cheap carafes of wine but a decent Scotch, too. A croque monsieur if we get peckish. And filling the daydream cane chairs and cracked banquette would be…

Fitzgerald and Hemingway—but not Zelda. I know, I know, Zelda was also an author and doesn’t deserve to be shunted aside. But by many accounts, F. Scott would get drunker faster when they were together, and fractious if he was in a jealous mood. I’d rather fantasize about Fitzgerald and Hemingway as their earlier, more eager selves, happy to talk about horse racing and gossip about literary journals. They can flirt with the girls up by the bar rail. Just don’t let them go to the pissoir together.

James Baldwin. The pre-entourage Baldwin, closer than not to the desperate young man who got to France in 1948 with just a few dollars in his pocket. That mobile expression, those huge eyes, and the expat’s perspective on America that Nicholas Delbanco recalled as “the fervor of the unrequited lover, curdling into scorn.” Also, it’s high time Hemingway learned to relax around a gay man!

Art Buchwald. Bouncing between all the tables, always with a funny anecdote about racing through the Louvre or masquerading as a diplomat. He may not be suave but he’ll pick up every girl in sight with a joke and a smile. He’ll close the bar with us and come along for onion soup at dawn.

Gertrude Stein. She’ll be stationed up front, with her little dog by her feet, busy making Pronouncements.

Stanley Karnow. Among all these magnetic talkers, Karnow would be a welcome observer, with the reporter’s ability to cut through the BS and ask a sharp question. Plus amazing stories of his own, peeking into the postwar underworld.

Sylvia Beach. As the proprietress of Shakespeare & Co., the legendary English-language bookstore and library, the Beach knew everyone, had read everything, and could chatter about authors from Turgenev to Simenon. She’d be lending a copy of the latest experimental poetry, and maybe discreetly passing along a few francs to Henry Miller. And that delightfully girlish bobbed hair!

Adam Gopnik. Oh, all right, you can come too.

How about you? Who would fill your midnight café?