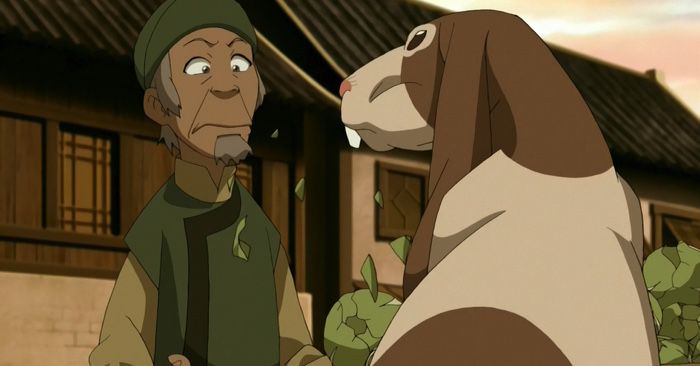 B-list heroes, however, haven’t gotten quite the same bump and I can think of a few who deserve a little love and air time. Those who endure terrible hardship in the name of that which they love most, who struggle, who survive against all odds. And against all vegetable thieves. Now remember, not all heroes wear capes (and as sartorial legend Edna Mode reminds us at ever opportunity, there’s a persistent school of thought none of them should) though this week’s lesser cult favorite could be considered a completely different sort of C-lister by virtue of his cruciferous darlings.

Name: Cabbage Merchant. Yes, that is his name. Well, it’s his title but it’s the closest we’ve got. He has also gone by Cabbage Corps. Don’t look at me like that, I did not name him.

Enemies: The passport attendant, Team Avatar (probably not on purpose), any people or animals who destroy his cabbages which is pretty much everyone

Listen, this poor dude just wanted to live. He loved his cabbages and he wanted everyone else to love them too, but fate…man, fate had it out for him. Every time he thought he’d found the perfect spot from which to offer his wares, those damn kids (AKA Aang, Katara, Sokka, Toph, Zuko, Suki, etc.), one of their damn pets (Momo, Appa…) or some damn spirit would come tearing through, upend his cart, crush his cabbages, and leave him bereft. His standard refrain of “My cabbages!” cannot even begin to cover his anguish.

It all started in Omashu when King Bumi threw Aang and Co. a party instead of beheading them for destroying his stock, and then the king himself busted up the replacement cart while cavorting with the kid. And destroyed his cart a second time while feeding pirates (the nerve), and then a passport officer forbade the merchant from bringing his produce aboard the ferry to Ba Sing Se due to the possibility of cabbage slug infestation, which his cabbages could not possibly have (they did). After restoring his stock in Ba Sing Se, the Cabbage Merchant found himself the target of a rabaroo who devoured all of them.

The only silver lining to his ring of encounters with Team Avatar was the impetus for the Merchants inclusion in a play about Aang’s adventures with his friends.

After the Fire Nation’s rein of terror came to an end, the Cabbage Merchant decided a restaurant might be safer for his beloved heads of cruciferous goodness and set up shop only to be visited by the Avatar and several of his new acolytes; he allowed them to stay due to a paucity of business but regretted his choice when Aang used his establishment as a jumping off point to the spirit world and an earthquake…brace yourself…tipped over all of his cabbages.

Surrendering to fate at last, the Cabbage Merchant set up a car manufacturing business he named Cabbage Corp. Extremely successful, he left the business to his son. Outside Cabbage Corp headquarters is a triumphal statue of the Merchant, one hand offering a cabbage to the heavens, standing beside a full cabbage cart.

I…honestly could not tell you why this is such a hilarious running gag. It shouldn’t be. The writers and voice actor on Avatar didn’t expect it to be. In an interview for NickALive!, James Sie revealed that that his appearance was intended to be a one-off gag but the Merchant ended up being so popular he not only became an occurring character across three seasons of Avatar but appeared in sequel series The Legend of Korra as well. In Slate’s “An Oral History of Avatar: The Last Airbender’s Cabbage Merchant,” Sie explained, “I never invested too much in his backstory because I didn’t think he’d be coming back. I just knew that he had a deep, abiding, somewhat strange attachment to his produce. That was my guiding principal. That he loved his cabbages.”