This year, Book Riot and the Harry Potter Alliance organized a day of book donations and meet-ups in honor of World Book Night, April 23, and what a night we had!

It's here, it's here! Make room on your shelves for charity at our #BYOBBookDrive TONIGHT: https://t.co/oXl28nWPdz pic.twitter.com/9BUl1G6TwC

A dude with a cape just showed up, but he's NOT here for the #BYOBBookDrive. How?

Some events doubled down on the snacks, like Richmond: 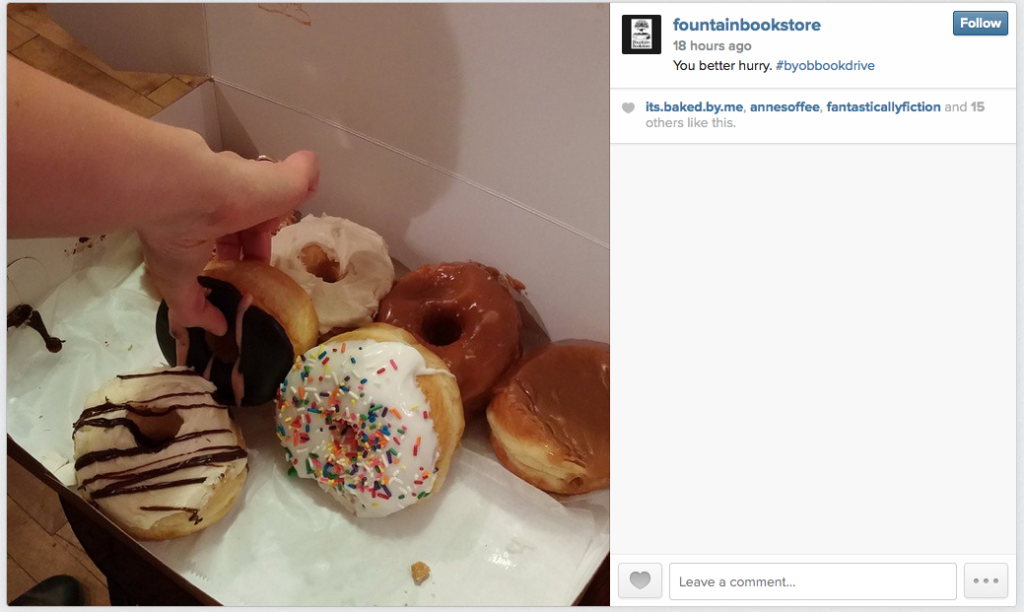 All the attendees really took our challenge to clear out their bookshelves to heart.

On my way to #BYOBBookDrive with the NYC @BookRiot crew and I've got a bag o' books! pic.twitter.com/cLLso1MgEp

And some were incredibly generous:

Someone just dropped this off sooo I feel like Chicago already won #BYOBBookDrive pic.twitter.com/TMxXEffNBq

Yes, that is a SIGNED FIRST EDITION of The Bone Clocks. Commence drooling at will.

The Apparating Library, in case you’re not familiar, is a roving library that appears only where Harry Potter Alliance folks are. Books are donated by event attendees, get cataloged, then traded and circulated amongst library donors. A few of the the BYOB events had full-on libraries; if you got one of those books, you can help track its journey here!

Our spokesperson @laurenthebird with the #BYOBBookDrive returns so far! Events are now starting around the U.S.! pic.twitter.com/jp9HJdN1t9

Thank you so much to everyone who came out and donated books; between the five cities, we collected more than a thousand books (!!!) and donated to five different literacy charities.

And if you missed it, never fear. The Harry Potter Alliance is running their book drive, the Accio Books campaign, through June.