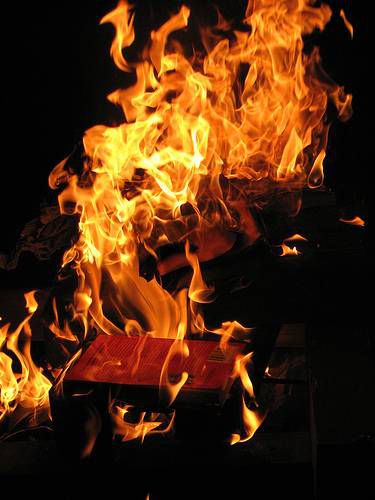 Yesterday, Kim told you all about why hardcover books suck.

I totally agree. And I’ll even go further: books, in their physical form, suck.

This is a stance not without controversy in my world. I am a stuffy English teacher. One who teaches English literature, stuffily, at a college. You are supposed to enter my dark, dingy office and see row upon row of carefully and lovingly annotated texts, full of post-it notes exclaiming excited discoveries and life-changing teachable moments. And you do. But lately I’ve noticed that I’m less and less likely to add to those shelves, and less and less likely to reach for the paper copies of even my most beloved books. I’ve become an eBook devotee.

I resisted at first, and for a long time. Reading, I asserted, is a tactile experience. I need to experience the whole book, I cried. The smell, the touch, the wrinkled page, the dog-eared notation. These are what add layers to the story, I reasoned.

But slowly, physical media departed from my life in most forms. I haven’t bought a CD since the launch of the iTunes music store, and physical copies of films and computer applications went next. I don’t even buy blank CDs and DVDs anymore, since my car and my media centre will both read my iPhone or memory key quite happily. Sometime in 2001, Steve Jobs told me to rip, mix, and burn, and I haven’t looked back.

But books were different. I didn’t understand the appeal of the Kindle when it first launched, and I really didn’t get how so many of my friends were reading documents on their computer screens. It all seemed so impersonal.

And then we planned our second cross-country move.

When we made our first move, my parents very generously covered the cost of our movers. So I hadn’t really thought about how much of my stuff was books. But four years of grad school later, I had an obscene number of books on my hands. My husband’s collection was even larger. We were both raised by engaged readers and appreciators of books (in fact, my mother-in-law was an antiquarian book dealer for many years — my anti-book stance is not one I trot out at family gatherings), and it had never occurred to either one of us to not collect books. But the numbers had to be pared down for the move. I went through my collection with a slash-and-burn mentality — if I couldn’t teach it, see myself reading it again, or name five things I loved about it, it had to go. The process took weeks.

And when I’d finished, the movers still measured our books alone not in pounds or kilograms, but in metric tonnes.

I began to resent my collection.

We moved a year ago. I find myself now giving the side-eye to books on the shelf that I haven’t picked up since we moved. Like, “It’s your fault, stupid book. Be read more!” And because my resentment towards my physical books lingers, I’ve been playing with eBooks more. And I like them.

I started with a Kobo reader, and I liked it immensely. I have since shifted, though, and now do almost all my reading on my iPad, shifting between Kobo’s app and Apple’s iBook reader.

I assumed I wouldn’t be able to annotate my eBooks, but I can! I figured I could never use eBooks for research, but the ability to search within a text makes finding and confirming quotations almost completely painless. If I was making an infomercial for the research use of eBooks, I would show a confused and flustered grad student, clearly sleep deprived, and up to his or her elbows in paper cuts. No more!

But more importantly, I worried about the loss of the experience of snuggling up with a book and a cup of tea — I thought the readerly experience would suffer. But it hasn’t!  It’s just changed. Now I like to turn the lights out and curl up with my iPad switched to “Night Reading” mode and  have this perfectly secluded world that is all about me and my book.

I’ve noticed my students who use eBooks never announce they brought the wrong book to class or forget altogether; their books are handily at their disposal at all times. And they annotate — or, more likely, don’t bother to annotate — at the same rate as my paper-book-using cohort.

My passion for eBooks is further fuelled by the fact that the Lower Mainland of British Columbia, where I live, is plagued by the problem of bedbugs in library books, which kind of makes me want to die. Snuggling up with a book doesn’t seem quite so cuddly after reading that, does it?

And people get uppity about DRM, which is totally an issue, but have you read the Book Riot Facebook convo about lending books? A fair number of people are DRMing their physical books their own selves. DRMing with a sprinkle of homicidal crazysauce. (A lot of mental murder happening in that thread, dudes.)

And all of this has forced me to wonder why I want to keep books I don’t pick up and look at often. Is my bookshelf really just an intellectual status symbol? Do I have a set of first editions of Robertson Davies’ Deptford Trilogy on display because those books are desperately important to me, or because I want people to know that those books are desperately important to me? And if it’s more the latter than the former, is that something I want to continue to pursue? I want to believe I left intellectual one-up-manship behind when I finished school, but maybe that’s not really the case.

eReading is not perfect, of course. I haven’t figured out a good way to read in the bath, for example, but luckily I still have oodles of paper books to work through before that will become an issue. Partly because I’m not perfect either, and despite my assertion that one full-sized Expedit shelf, stocked front-and-back, would be it for our books, the collection grows and takes over other shelving units — much more slowly now, but it does grow. I can’t resist an independent bookstore, still, and I’m early enough in my career as an academic and my hobby as a book blogger to still be utterly thrilled by the arrival of review copies. So new paper books still arrive. But they don’t arrive in nearly the numbers they used to, and I lend more freely and with less concern for the books coming back. I love them, but I’m happier if they live elsewhere. (This is similar, incidentally, to my philosophy around children.)

In the end, I’ve never been a snob about form. If a story engages me, I don’t care if it’s a TV show or a blog or a comic book or a classic novel. And I guess that has extended now to the physical form of the book, too.  eBooks are just better for my lifestyle. So I switched.

I cheekily declare that it’s time we burn all the books. But I know you’ll have something to say about that, Book Rioters. So in the pale embers of my post I say to you, “Flame on!” I’ll meet you down below, in the comments.