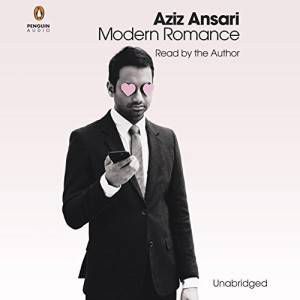 Is it just me, or is the sudden wave of not-quite-memoirs by actors of South Asian descent weighing down your TBR pile? Granted, there have been a lot of celebrity confessionals in recent years. Everyone from Lena Dunham to Tina Fey has done a book (or three) of essays, and we can expect upcoming insights from Gabourey Sidibe, Anna Kendrick, and Amy Schumer — whose book reportedly fetched $8 to 10 million — soon enough.

But with the brown folks in Hollywood, it’s almost like their Desi parents said, “Yeah, sure, you’re on TV and all. But my friends won’t think my kid’s a success until you have a book out, too.” (Trust me, I feel their pain. You are never good enough.) And so what do they do? Essays, of course. We rounded ’em up with a few universal truths brown folks hold to be self-evident. 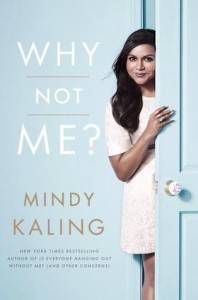 
The follow-up to her 2011 collection, Is Everyone Hanging Out Without Me?, this new collection picks up where the other one left off, talking about female friendships, dating dilemmas, cultivating a creative career (“career” being the operative word there!), and, of course, body image, because no one will let the girl slide without talking about that. And hence, this Confessional Quote: “People sometimes sweetly say that I have ‘child-bearing hips,’ but what they really mean is that I have hips that will definitely knock over your drink if you are sitting next to me on a plane and I have to get up to use the bathroom.” 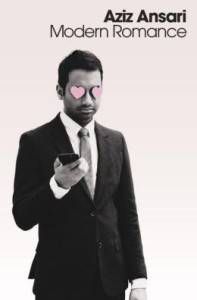 True Story Newsletter
Sign up for True Story to receive nonfiction news, new releases, and must-read forthcoming titles.
Thank you for signing up! Keep an eye on your inbox.
By signing up you agree to our terms of use
Parks And Recreation star Ansari — who has a Netflix original series, Master of None, debuting in November — is expectedly angsty and self-deprecating in this book of dating advice for generation Tinder. But sadly, Ansari seems just as lost as the rest of us. He just has a funnier story to tell at the end of that date from hell. Case in point, his take on the perils of online dating while famous: “As a public figure, I have never considered doing any online dating. I always figured there was a chance someone who was a stalker type would use it as an opportunity to kidnap and murder me… Maybe my stalker (probably an Indian dude) sees my profile and thinks, Oh, here’s that comedian guy on OkCupid. FINALLY, I have a way to reach out to him and slowly plot his murder. He sends me a message pretending to be a woman. I see the profile. ‘She’ likes tacos and Game of Thrones. I’m very excited.” 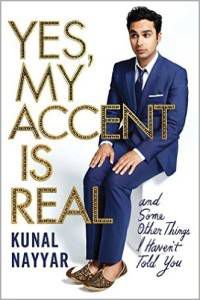 Yes, My Accent Is Real by Kunal Nayyar
Nayyar, who’s played the female-phobic astrophysicist Raj on The Big Bang Theory for eight years now, delves deep into the immigrant experience — he came to the United States as a undergrad business student — in his memoir, which digs into dating, his days as a theater kid, his rise to fame, meeting his beauty queen wife (who thought Big Bang was a porno), and even that Indian head bobble he taught Conan O’Brien about last year on the Late Show. “Let’s take a second and talk about the Indian Head Bobble. Yes, I’m going to go there. Because yes, it’s true that Indians bobble their heads all the time. That’s not a racist thing to say because a) I am Indian, and b) bobbling our heads is a very important and sophisticated form of communication. When you bobble your head, you’re not really saying yes, and you’re not really saying no. So much is communicated and so much is not communicated by the bobble. It could mean: I’m full. I’m hungry. I’m confused. I’m happy. I understand. Talk to me. Stop talking. Never talk to me again.” Okay, so perhaps the book meanders a bit. Still, some fun dating dramas here and there.

And for good measure, here’s a brown celebrity confessional we’d like to see, STAT.

Geeks, Girls and X-Files Underoos by Kumail Nanjiani
Stand-up comic Nanjiani — best known as Dinesh on Silicon Valley — has a lot to say, as evidenced by the video game and X-Files themed podcasts he runs with his writer-producer wife Emily Gordon. But his stand-up hits closer to home, whether you call it his native Pakistan, or stateside, in LA or in Iowa, where he went to school. He’d have plenty to expound on. Case in point? Bonding with his now-wife’s parents at the hospital while she was in a coma, an experience he and Gordon are immortalizing in script form. “I hung out with her parents while she was in a coma for eight days! That’s when I told my parents, ‘Hey! Good news/bad news. Actually, for you guys, bad news/good news? I dunno, anyway: I’m in love with a white girl and she’s in a coma. I don’t know how you’re going to take either of those.'” I mean, how could you not want to read that?