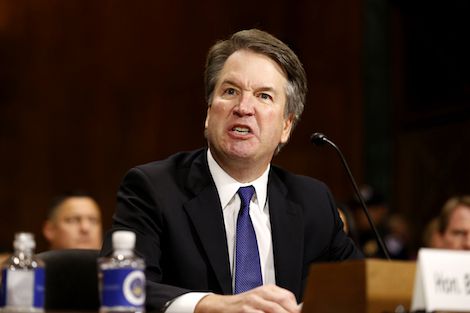 Catland Books, a independent bookstore in the Bushwick neighborhood of Brooklyn that describes itself as “Brooklyn’s favorite witch shop” on Instagram, is planning to hold an event next Saturday to hex Brett Kavanaugh as well as “all rapists and the patriarchy which emboldens, rewards and protects them.” The event website adds that “[Kavanaugh] will be the focal point, but by no means the only target, so bring your rage and and all of the axes you’ve got to grind.”

After the first ritual will be another, which Catland Books is calling The Rites of the Scorned One, which seeks to “validate, affirm, uphold, and support those of use who have been wronged and who refuse to be silent any longer.”

Witches! We've listened to your feedback and added an option for a ticket purchases which can help boost donations. If you're able and interested, please consider purchasing a ticket for $10. 25% will be donated to Planned Parenthood and 25% will be donated to the Ali Forney Center. The other 50% will be used to make some badly needed renovations to our space in time for the winter months. Also, please remember to get out there Nov. 6th and VOTE! xx Catland (swipe right ➡️)

There’s a reason many women find power in witchcraft, a practice long rooted in subversive womanhood and rebellion. I studied the Malleus Maleficarum (usually translated as Hammer of Witches) in one of my classes in college, and it taught me a lot about how deeply the roots of the opposition between witchcraft and patriarchy run in our society. Hunting and stamping out witches was done largely to suppress women, particularly subversive or poor women, and to halt their attempts to control their sexuality, agency, reproduction, or health. Women’s agency was so horrifying to the patriarchy that it felt it was necessary to stamp it out, and so witch hunting began.

The event page for the Hex acknowledges this, noting: “We will be embracing witchcraft’s true roots as the magik of the poor, the downtrodden and disenfranchised and it’s history as often the only weapon, the only means of exacting justice available to those of us who have been wronged by men just like him.”

This isn’t Catland Books’s first public hex event: they put on three events in the summer of 2018 to hex President Donald Trump.

I wish I could go, but alas, I moved to the wonderful literary hub of Chicago a few years ago and can’t make it. If you’re interested in attempting the event, you should know that 25% of the event proceeds will go to the Ali Forney Center and 25% to Planned Parenthood, but that no one will be turned away for lack of funds. The event will take place on Saturday, October 20th at Catland Books.