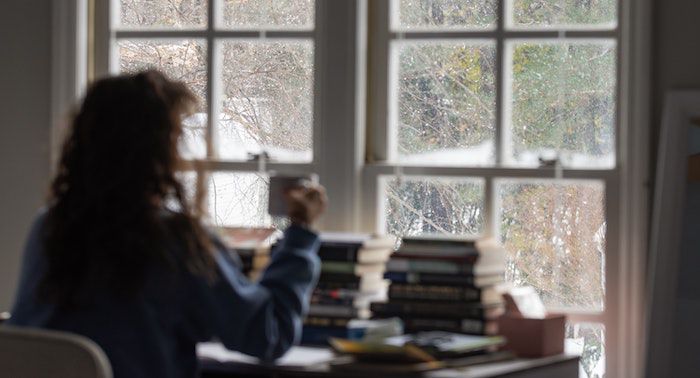 Oh hey there, endless pile of unread books! How are you doing? I’d like to say it’s been awhile, but we see each other every night: you stare at me while I sit in bed and read, and I pretend not to see you over there. We’ve been through a lot together since I unofficially started piling new unread books in this corner of my bedroom back in the summer after 10th grade—and we’ve most certainly been through a lot this year.

Let me start by saying I’m sorry. Maybe you’ve noticed that I tend to take out a lot of my existential anxieties out on you, especially in the last five years. It’s a lot of pressure to have to meet my impossibly high standards of perfection and entertainment, especially when I’m anxious. It’s a lot of pressure to have to contain the answers to everything that seems to be going wrong in my life at that moment, especially when they are answers that only I have the power to find. And it’s definitely been a lot of pressure to have to distract and entertain me when the entire world falls into a crisis with no definite end or solution in sight. None of this is your fault. You are, after all, only books—while I have personally experienced the magic that is sometimes hidden within your pages, there are some things that even the best books in the world can’t cure.

I used to meticulously add and subtract books from you. If I bought a new book that made you grow even higher, I had to read one that’s been there for a while first. If there was a new release that I had been waiting months or years to get my hands on, I might make an exception, but as a whole I used to be very conscious of your feelings (as if you actually have those, since you clearly have no consideration for mine when you casually and repeatedly rip my heart from my chest).

I used to be consumed by an overwhelming sense of guilt if I read a new book I had just bought for no reason at all, instead of reading something from you that I’d bought two years ago. Instead of calling out the power I was giving you, a motionless pile of books, I would punish myself for no reason. Because maybe I felt I needed to be punished sometimes; that I didn’t feel I’d accomplished or achieved enough to warrant enjoying something for pleasure. I created you out of pleasure and before long had turned you into a monster.

To paraphrase Sylvia Plath: TBR pile, I’ve had to kill you. Even as the first phase of a global health crisis was in full effect, I was still buying books for you that “sounded like something I’d like,” because maybe I’ve read that author before or maybe something in the premise drew me in, or maybe just because people on Goodreads were talking about it and I didn’t want to miss out on the conversation. Maybe I just wanted a nice picture of you for Instagram. But as sparking joy became harder and harder, with thousands of people losing loved ones every day, I realized that maybe I’d been stocking you with the wrong books; that maybe I needed to sit and ask myself, “What do I actually feel like reading right now?”—instead of forcing myself to read something I’d bought a year ago, something that I may or may not have bought just for the purpose of feeling smart and productive.

In the past, when I’ve gotten tired of the hold you have on me, I’ve usually just gone to the library and picked out something new that I’m sure will erase everything ugly I’m feeling right now. As much as I’ve taken my neuroses and anxieties out on you, the library deserves its own letter entirely. But for several months, going to the library was not a possibility: the books I had checked out from the winter sat on my desk, months overdue, which in itself felt like committing a crime. So I bought some new books for you, and not ones that I would usually buy. Lots of non-fiction. Books about movies. Books about real-life mysteries, events, or places. Books about things I love.

Not to say I have never reached for books like these before, but I’d been hesitant to spend money on adding them to you, pile of books, because…what if I don’t enjoy them enough, I guess? Despite the fact that, as I’ve gotten older, it’s become harder and harder for fiction to impress me—and yet I still willingly stock you with books from that genre. It was time for a change, and it was time for new books. (Maybe this is just me trying to justify charging new books to my credit card during a time of profound and collective sadness, but that too is a different letter.)

As I bought new books and read most of them right away, I released any guilt I’d felt for not reading older books from you first because, quite frankly, I’d bought those books in a past life that I have yet to return to. I released (or at least attempted to) old anxieties that convinced me my self-worth and productivity was tied to the amount of books I’d read in a given time period. I started finding it hard to focus on books at any time that wasn’t right before bed, and I made peace (or at least attempted to) with that. The ability to stay distracted during a particularly difficult year for mankind has still been challenging, but I did learn how to take back some of the power I’ve given you—and how to transform you from a monster back into a friend.

We’re still in each other’s lives, TBR pile. You still sit in my room like you always have, constantly growing and shrinking, still containing many unread books from over a year ago. (One year or one lifetime? I’m still not sure.) A year ago, I would have gotten anxious over something that most likely turned out fine in the end and, as a result, forced myself to read something from you that has been there for far too long. But if this year has taught me anything, it’s that time isn’t real, and the hold you have over me isn’t real, either. Just as Sarah told the Goblin King in Labyrinth, “You have no power over me.”