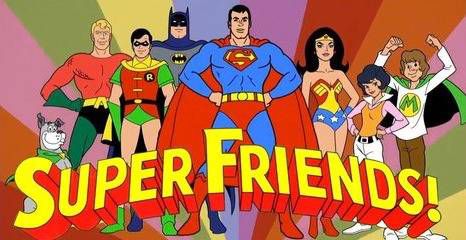 On Tuesday, DC Comics revealed that writer Brian Michael Bendis had signed an exclusive contract with them, bringing his more than 17-year relationship with Marvel Comics to a close.

While the initial announcement leaves many questions—e.g., what will happen to characters like Jessica Jones and Miles Morales that have been written almost exclusively by Bendis?—perhaps the biggest question is what he will be working on for DC. Well, fortunately, here at Book Riot we happen to have an edition of the Encyclopedia Galactica that had the good fortune to fall through a time warp from a thousand years in the future, so we’re able to bring you an advanced look at some of what Bendis’s DC bibliography will look like.

Super Friends: Unfriended, followed by New Super Friends: After a horrifying attack on the Hall of Justice, the Super Friends  unfriend each other. But when an army of supervillains breaks out of the Phantom Zone, a spunky new batch of Super Friends will rise like a Ra’s al Ghul from the  Lazarus Pit of the old, made up of characters from across the DC universe. Their first test: stopping the Joker, who has somehow reformed reality in his own image, in the blockbuster crossover House of J.

Earth 24 Batman: This series will retell Batman’s earliest stories for a new generation. The first arc introduces us to sullen teen Bruce Wayne, and his pals at Gotham Academy, including Selina Kyle, Kate Kane, and Lucius Fox, who will banter about the things teens did in 2002. In issue 17, a bat will crash through Bruce’s window, inspiring him to become a superhero. But, will he and his crew be able to stop the Penguin, who for some reason looks a lot like TV’s Tim Gunn?

a/k/a Barbara Borden: Barbara Borden used to be a superhero, but after a run-in with a major supervillain with an affinity for the color purple, she put away the tights, and is now a tough-as-nails private detective with a fondness for whiskey. Her first case: helping a certain prominent member of the Justice League recover a missing sex tape before it’s revealed to the world. Later, she’ll team up with Batgirl, a/k/a Barbara Gordon, with whom she shares absolutely no similarities, why would you even think that?

Pre-Teen Titans: When faced with a problem that the Teen Titans can’t solve, Wally West races back in time to recruit younger versions of the team who have not yet been hardened by the grim dark reality of the New 52. But how will these pre-teen Teen Titans adjust to the new world they find themselves in? And which Teen Titan will be shocked to discover they have been secretly queer all this time? (My hope: literally all of them.)

Age of Brainiac: After years of teasers, Bendis will rock the DC universe with this massive crossover, which teases a world ruled by the evil Brainiac. But, rather than show the epic showdown between the Justice League and Brainiac, the event will center on Sue Dibny and Lobo traveling back in time to prevent Brainiac from ever coming to Earth in the first place. Brainiac will appear in one panel in issue #7.

And that’s just a glimpse of what Bendis has in store for us in the DC universe!

But, seriously, congratulations to Bendis, and congratulations to DC for snagging an exclusive on such a huge name—and such a critical part of Marvel’s braintrust for almost two decades. I look forward to seeing what he and DC have in store for us.

(All kidding aside, I would totally read a/k/a Barbara Borden.)