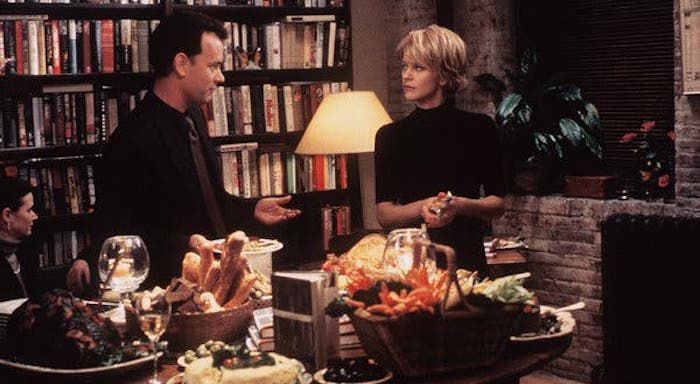 Ah, I can see it clearly: the opening credits of Nora Ephron’s You’ve Got Mail (1998). “The Puppy Song” by Harry Nilsson is interlaced with a goofy animation sequence with the dial-up internet connection sound. This warm greeting charms the viewer into a feel-good mood about a feel-good story, bolstered by the Cranberries song in the background as heroine Kathleen Kelly (Meg Ryan) goes about her morning routine on a particularly autumnal day, reflecting on how she looks forward to logging on her computer and being greeted with the three precious words: “You’ve got mail.” Each time she logs in as Shopgirl, Kathleen hopes she’ll find an email from NY152, her anonymous pen pal she can’t stop thinking about.

Few movies have as sentimental a place in my heart as Nora Ephron’s You’ve Got Mail, starring Meg Ryan as Kathleen Kelly, the owner of a children’s bookstore, and Tom Hanks as Joseph “Joe” Fox, heir to a corporate, big-box book shop franchise. When the two clash over their competing businesses, it seems like they’ll be enemies to the end. But thanks a big, romantic twist of fate, they are also anonymous pen pals who met in a chatroom and eventually struck up an email dialogue that becomes the bright time of their day. The “You’ve Got Mail” ping from America Online (AOL) is a welcome escape from the stress of work and connecting on a level they can’t match with their current partners.

For years, I have cherished this film and returned to it again and again in times of distress (breakups, bad times, depression) as well as times of happiness. It never ceases to amaze me how this bookish romcom can deliver joy each time I watch it. Endlessly layered, You’ve Got Mail is also perfect for re-watches. Every time I revisit the movie, I see something I didn’t before.

Which is how I discovered the sour truth I cannot now unsee: that Joe Fox, AKA “NY152,” subtly manipulates and gaslights Kathleen, AKA “Shopgirl,” steering her towards the outcome he wants.

Once I saw the dark side of Hanks’s character, it became impossible to not see it everywhere.

It starts with the day of the fall festival in the Upper West Side, where the independent children’s bookstore owned by Kathleen is located and the soon-to-be Fox Books will soon reside. Enchanted by Kathleen as he watches her read to children, Joe evades telling her the truth — that he’s the big, bad wolf (or, more accurately, fox) coming for her business — and narrowly avoids revealing his last name, instead imploring her to just call him “Joe.” While I can understand why he’d want to avoid bringing awkward baggage in their first conversation, it initiates a series of escalating manipulative behavior.

A crucial turning point happens when Kathleen and Joe are set to meet up for the first time. Neither know the other’s identity as this will be the reveal. Joe arrives after Kathleen and, full of nerves, sends his friend to peek in the window of the restaurant. Joe’s friend tells him if he doesn’t like Kathleen Kelly, he won’t like his date because it is Kathleen Kelly. Now Joe has the upper hand, forming an imbalanced power dynamic with the key information that NY152 knows who Shopgirl is, but Shopgirl still doesn’t know the man behind NY152.

Next, Joe walks in the restaurant and attempts to pass it off as a pure coincidence that he saw her there. Joe pretends to snuff out that she’s waiting for someone important. His behavior is cruel and belittling. He teases Kathleen — ignoring her pleas to please leave — and speculates that each new customer is the persons she is waiting for. Kathleen, humiliated and downtrodden because she thinks she’s been stood up, comes after him with knives out, accusing him of being little more than a suit. In other words, he is a cold and heartless person. It’s a judgment that cuts through to Joe, finally breaching his icy, alpha, man-of-steel persona, and a watershed moment for Kathleen, who is not used to speaking her mind.

And so begins the part of the story when Joe manipulates and gaslights Kathleen ruthlessly. Believing in his heart that they are meant to be together, Joe steers their fraught business relationship into a genuine friendship, though he always has the upper hand and destroyed her business.

But the undercurrent of Joe always knowing the truth darkens the story. Joe jokes around about the man “NY152” could be…someone “who’s fat,” “who’s had 152 moles removed” and now has 152 pockmarks on his face, “152 people who think he looks like a Clark Bar, “152 stitches from his nose job,” and so on. Kathleen’s authentic connection with NY152 is gaslighting fodder for Joe’s comedy routine, subtly subverting her expectations that NY152 is a suitable match and making her begin to doubt herself and the very real possibility of a romance with NY152. Then, after spending time together as friends, Joe has softened Kathleen and prepared her for the finale, when he meets her in the park with his dog, tells her “Don’t cry, Shopgirl,” and kisses her. In other words, he’s manipulated the situation perfectly. After putting Kathleen out of business, Joe has managed to sweep her off her feet all while pulling the puppet strings to get it to happen.

What are we to do when we open our eyes — or have them opened for us — and discover a story that we’ve loved is problematic?

I will always adore You’ve Got Mail for the good parts: the bookish glow over everything, the fact that the lovers are on the older side, the plucky soundtrack, and the Upper West Side feel that is familiar to me because I once lived there. It doesn’t matter how out-of-date the film is; the Onion skewered in its article “Fox Books Files for Bankruptcy.” However, now that I’ve seen the light — or rather, the dark side of the film — I rewrite Kathleen’s story. In this new story, I hope Kathleen finds companionship, happiness, and joy independent of Joe or any other man. A children’s literature crusader, a bookworm, and a genuinely kind person who discovers the courage to speak frankly and with candor, my new Kathleen now advocates for her own happily ever after.