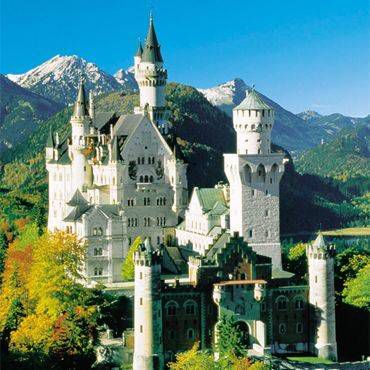 Fairy tales are Mythology for children. On the sometimes scary and always difficult path that leads to adulthood, Fairy tales are there to teach us how to be brave. They show us virtue. They warn us that, should we forget our responsibilities and get caught up in the phantasmagoria of life, then we’re going to have to suffer the consequences for our indiscretions. But just as important as all of this is that they’re super fun and entertaining. And they stick with us. Everyone remembers the fairy tales they learned as kids. Everyone has their favorites. So would it blow your mind to know that there are new ones out there?

OK, not necessarily new ones, although the case could be made for new ones existing, I suppose. But the fairy tales I’m referring to are old ones recently rediscovered. Rediscovered for a second time, actually.

The story goes like this: In the Bavarian region of Germany known as Oberpfalz, around the same time that the Grimm Brothers were gathering their collections of stories in the middle of the nineteenth century, another man was hard at work. Franz Xaver von Schonwerth, a folklorist of somewhat noble lineage, spent decades scouring the countryside for folk tales, myths, and fairy tales. The results were such a prodigious success, that you have to think him being overshadowed by the Brothers Grimm was nothing other than an unfortunate twist of fate.

Most of the stories he collected were eventually gathered, printed, and published in three volumes. And if you consider what he actually accomplished, it’s pretty impressive. He took all these stories from farmers and laborers and basically illiterate people and wrote them down for the first time ever. It was such an impressive record of collective wisdom that even Jacob Grimm, who you think would at least maintain the ironic distance of a competitor, complimented him by saying, “Nowhere in the whole of Germany is anyone collecting [folklore] so accurately, thoroughly, and with such a sensitive ear.” And if that wasn’t enough, he told the king of Bavaria, Maximilian II, that if something tragic were to happen to the Grimm duo, that von Schonwerth should be the one to pick up where the left off. You have to wonder if his efforts had maybe already outstripped theirs.

Alas, his three volumes of fairy tales fell into obscurity. They were pretty much forgotten about until the Oberpfalz cultural curator Erika Eichenseer found a collection of 500 fairy tales while rummaging through von Schonwerth’s stuff. Most of these stories are completely unknown to the contemporary collections of European folklore and fairy tales. She published a collection of a few of the stories last year, and I won’t give you any spoilers. You’ll have to read it yourself. But I think it is worth mentioning that, unlike the Grimm Brothers, von Schonwerth was a serious historian. His goal was just to accurately record the stories that he was being told, without glossing them over with a fine literary sheen. So the stories seem “raw” compared to the Grimm ones that we’re used to. But that’s great, because we’re exposed to an authenticity and originality that we couldn’t experience before. So go ahead, check them out, slay your dragons, save your maiden, and make your way safely home.